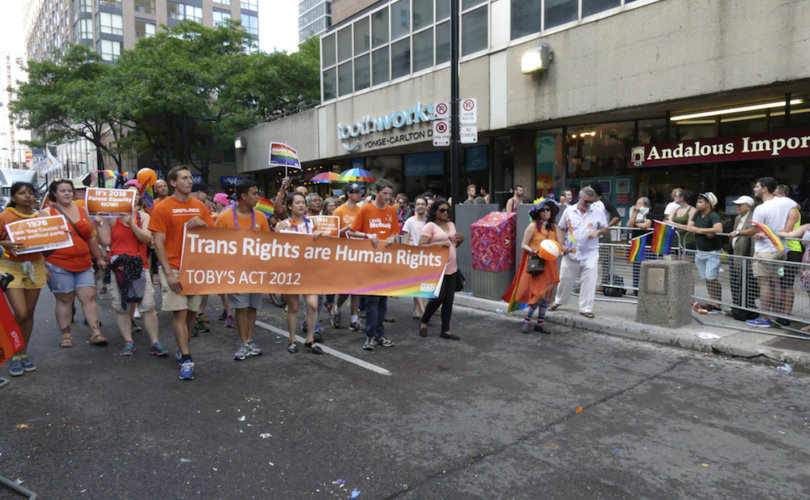 OTTAWA, November 3, 2016 (LifeSiteNews) – The Liberal transgender “rights” bill is flushing easily through the committee stage in the House of Commons without expert witnesses, evidence of any hate crimes or discrimination against so-called transgender individuals, or a clear definition of what “gender identity” and “gender expression” mean.

Gwen Landolt, vice president of REAL Women of Canada, is furious that the Liberals are using their majority on the House of Commons Justice Committee “to nonchalantly ram through a bill without providing adequate explanation, evidence or data to support it.”

The bill will add “gender diversity” and “gender expression” to the Canadian Human Rights Act and to the Criminal Code. It will mean the CHRA and the Code would protect Canadians from discrimination and genocidal hate propaganda based on these two grounds. It also requires judges to consider adding to the sentences of people convicted of crimes motivated by hatred against transgender people.

“This bill will have wide-ranging impact,” Landolt said. “It is based purely on politically-correct ideology, not facts or evidence, and is being rammed through Parliament in a highly undemocratic manner.”

It passed second reading in the Commons after just four hours of debate. In the Justice and Human Rights Committee, no witnesses were called by the Liberal majority from either transgender groups (who then could have been questioned), nor from Christian, social-conservative or parent groups opposed to the expansion of transgender “rights.”

The committee, in fact, only heard from Justice Minister Jody Wilson-Raybould and Deputy Minister William F. Pentney. The justice minister justified the bill with generalities such as “the strength of Canada is its diversity” and claims that transgender people suffer from “too frequent hate crimes, hate propaganda,” and “discrimination” on a daily basis.

But Wilson-Raybould had no substantive answer when Manitoba Conservative MP Ted Falk provided statements from senior officials of the Canadian Human Rights Commission, and a backgrounder from her own ministry all stating that transgender people were already protected by the existing Criminal Code and human rights law under the ban on discrimination based on “sex.”

Wilson-Raybould repeated that the added categories were needed to provide clarity that “all Canadians” were protected. Judges are required to interpret the Criminal Code “narrowly,” she said. To get them to also protect transgender people required explicit wording.

But asked by Alberta Conservative MP Michael Cooper if she knew of any cases of transgender discrimination that judges refused to protect under existing law, she admitted she did not. Nor did her deputy minister.

In fact, Landolt reported, Wilson-Raybould “admitted at the committee hearing that she had no actual evidence or data on whether transsexuals were actually experiencing discrimination or hate but was only relying on information provided to her from partisan Transgender and LGBT activists.”

Landolt also complained that despite the claim that Bill C-16 was needed for clarity, “it was clear that no one understood the meaning of the expressions ‘gender identity’ and ‘gender expression.’”

Landolt cited a new study published in the August issue of The New Atlantis by a team of gender specialists refuting the claims of transgender lobbyists that there is an innate biological or genetic basis for transgender issues. It states in part, “The belief that gender identity is an innate, fixed human property independent of biological sex — so that a person might be a 'man trapped in a woman's body' or 'a woman trapped in a man's body' — is not supported by scientific evidence.”

Landolt told LifeSiteNews, “This bill is a political statement which will be followed with programs of employment equity and amelioration. … It is completely unacceptable, both in regard to the procedural process applied as well as to its content.”