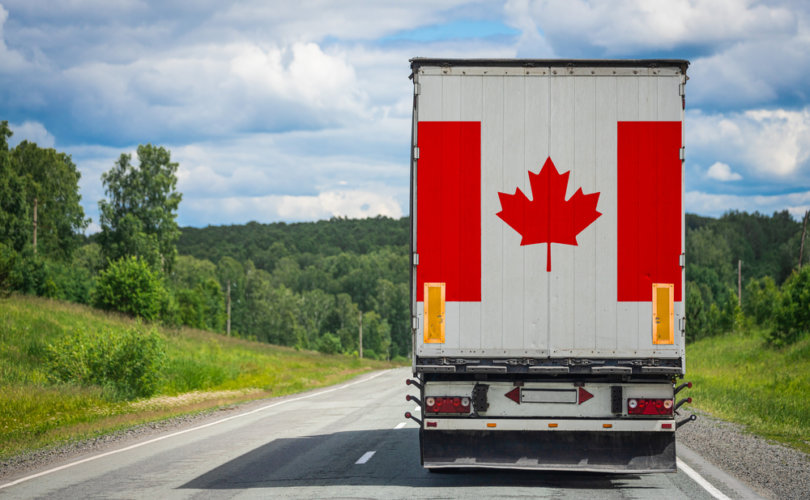 Robert Penner, who is the president and CEO of Winnipeg-based Bison Transport, one of Canada’s largest trucking firms, said his company alone has already lost nearly 10 percent of its cross-border drivers due to the trucker jab mandate, which went into effect on January 15.

Penner noted “without question” the COVID jab mandate for truckers has created “challenges for our industry,” noting that it will “drive up costs on all goods originating from or destined to the United States,” as reported in the Globe & Mail.

Mark Millian, the president of the Private Motor Truck Council of Canada, had warned the federal government under Prime Minister Justin Trudeau of possible shortages of goods moving across the border before the mandate took place.

“We already have a fractured supply chain,” Millian said, as reported in the Globe & Mail, noting that if the supply chain is damaged, “we’re going to see a shortage” of the supplies Canadians need for their “own health and safety.”

The mandate came as a surprise to many as only a day earlier, multiple media reports surfaced saying the Canada Border Services Agency (CBSA) said un-jabbed truck drivers would be allowed to enter Canada from the United States.

Canadian truckers coming from the United States who are not jabbed will still be allowed to enter the country, however, they will be forced to do a COVID test and then quarantine for up to two weeks. Un-jabbed American truckers will be denied entry.

The jab mandate for truckers was first announced on November 19, 2021, by the federal government.

According to the Canadian Trucking Alliance (CTA), it is estimated that the mandate will impact up to 30,000, or around 30 percent of Canadian truck drivers and about 16,000 American truck drivers who enter Canada regularly.

The U.S. will implement a trucker jab mandate of its own starting on January 22.

Truckers in Canada are fighting back against the jab mandates.

Ahead of the “Freedom Convoy” some truckers in the Canadian province of Manitoba just a few days ago staged a slow-rolling protest against COVID jab mandates along at the Canada/U.S border in Emerson. The protest has led to major delays in the area.

Conservative Party of Canada (CPC) MP for Southern Manitoba Ted Falk was onsite at the protest to show his support for un-jabbed truckers.

Falk blasted the COVID jab mandates for truckers, saying “Trudeau has arbitrarily villainized these brave men and women are a threat.”

Additionally, regardless of the Trudeau government’s ongoing persecution of the vaccine-free, COVID jab trials have never produced evidence that the injections stop infection or prevent transmission. They do not even claim to reduce hospitalization, but the measurement of success is in preventing severe symptoms of COVID-19 disease. Moreover, there is strong evidence that the “vaccinated” are just as likely to carry and transmit the virus as the unvaccinated.