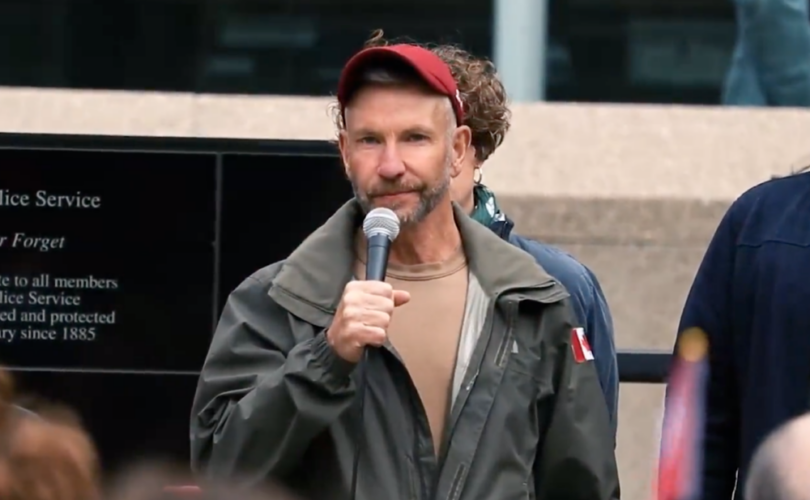 (LifeSiteNews) – James Topp, a veteran of the Canadian Armed Forces (CAF) who walked across Canada in protest of COVID jab decrees, is now facing four new charges by the military for speaking out against injection mandates.

According to the Canadian Press, Topp is facing a total of six counts of conduct to the prejudice of good order and discipline.

Two of Topp’s new charges relate to video statements he gave which were posted on social media in February blasting the military’s COVID jab mandate. The charges come under Canada’s National Defence Act.

The military seems more eager to go after Topp’s anti-jab statements rather than what they claim were his minor offenses, such as wearing his uniform while marching across Canada.

One of his new charges is indeed for not wearing his uniform properly.

Topp’s lawyer Phillip Millar says the charges will be fought in a military court.

Last year, Canada’s military imposed a COVID jab mandate for all its personnel. As a result of the mandate, many who refused were kicked out of the armed forces via an administrative process called the 5F release.

Those who did not get the jab were not charged, and the legality of the military jab mandates has been questioned.

As LifeSiteNews reported, in July it was revealed that Topp will face a court martial for his actions in protesting the COVID mandates.

Topp gained inspiration from the Freedom Convoy and decided to trek from Vancouver to Ottawa on foot. He later kept going on to the East coast of Canada.

According to Topp, his top three main priorities were the repeal of COVID mandates, that people who were fired from their jobs for not getting the COVID jabs be reinstated, and that they receive restitution and repair.

— Article continues below Petition —
The Quebec College of Physicians must not be allowed murder infants
Show Petition Text
4298 have signed the petition.
Let's get to 5000!
Thank you for signing this petition!
Add your signature:
Show Petition Text

Earlier this week it was reported that the Canadian Armed Forces commander was given a warning from his legal staff as well as the medical team that COVID jab mandates for the military were not only not needed, but “may not constitute a legal order.”

LifeSiteNews recently reported that Canada’s military intends to go ahead and dismiss soldiers and staff who refused the COVID jabs.

Around 96 percent of military personnel have had the COVID shots, with over 1,000 service members having refused the jabs.

In June of this year, the Canadian federal government dropped COVID mandates for federal workers; however, the military at the time did not seem to comply.