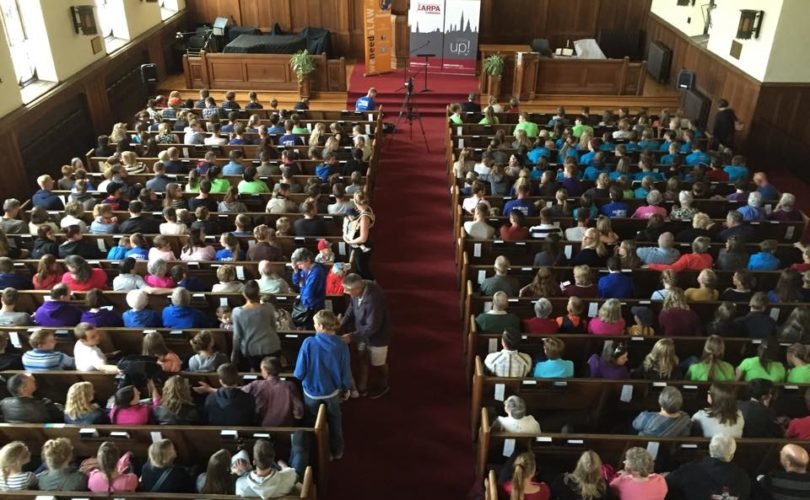 There was a packed house as Reformed Christians gathered at the First Baptist Church of Ottawa the morning of the 2015 March for Life.

OTTAWA, May 14, 2015 (LifeSiteNews) – Canadian  culture is “cozying up to death,” the Rev. Peter Holtvluwer told a standing-room-only audience of more than 360, mostly young, Reformed Christians gathered at the First Baptist Church of Ottawa the morning of the 2015 March for Life.

Holtvluwer, pastor of Spring Creek Canadian Reformed Church in Tintern, Ontario, based his meditation on the story in the Gospel of Mark of the self-destructive demoniac whose legion of demons Jesus exorcised. “He cut himself, he liked to stay near the tombstones in the cemetery. He was cozy with death.” And when the demons drove a huge herd of pigs to their deaths, “Satan loved it that day. Satan loves nothing better than to put an end to life.”

But our society too is cozy with death, the pastor said. “Since 1988 Canadians have had unrestricted access to the killing of babies in the womb.” And now, with the decision of the Supreme Court to legalize assisted suicide, many people insist “that if we want to die, we should be assisted to die in as humane a way as possible.”

Christians needed to counter this with the example of Jesus, Holtvluwer said. “He loved life so much he was willing to suffer death.” Pro-lifers must work to redeem their enemies and restore them as “God’s sons and daughters.”

The audience also heard from two young girls from Chatham, Ontario, Sabrina and Brooklynne, who organized a volleyball tournament, Spike for Life, this year to raise funds for the We Need a Law pro-life group. “A lot of  abortions are done on girls our age,” they said. “We need to welcome those girls with open hearts. We are all God's children. We are all part of the fallen world.”

In the audience were many young mothers, such as Patrina Kelly, there with her baby Saskia from Dunnville, and Sharon Bout, with her son Ryan and daughter Lauren from Vineland, and fathers, such as Carl Hiemstra of Aylmer with son Daniel and daughter Heidi. Recounted Carl, “Daniel was saying on the drive over here that he would sleep better at night when we end abortion for good.”

Why are Reformed churches so strong for life? The Rev. George Van Popta, who emceed the event and whose Jubilee Church hosted it, explained the influence of Abraham Kuyper, a Dutch pastor-turned-politician who argued that religious values should apply in every aspect of life.

Explained Van Popta: “It was Kuyper who said, ‘There is not a square inch in the whole domain of our human existence over which Christ, who is Sovereign over all, does not cry: ‘Mine!’”

The Reformed Church in Canada has founded a Christian labor union, a Christian farmers’ group and a social justice group as well as the much more recent Association for Reformed Political Action, which champions the pro-life cause in Ottawa.

Pro-life efforts are ‘a powerful witness to your Catholic faith,’ London bishop says at March for Life mass