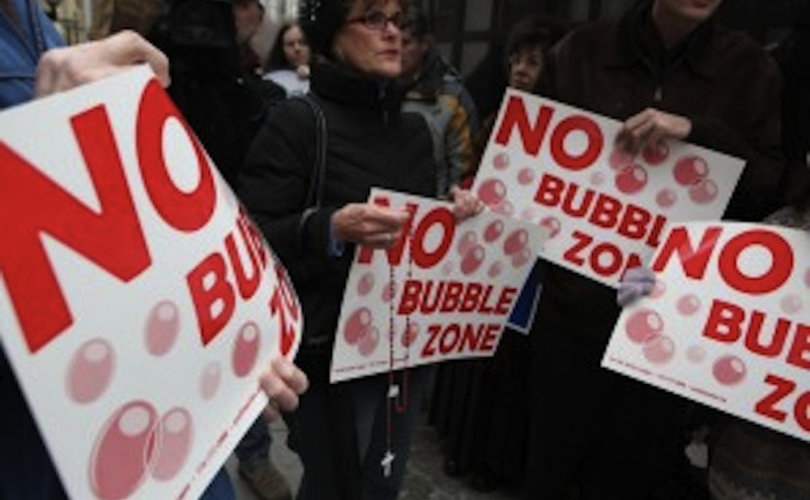 TORONTO, October 9, 2017 (LifeSiteNews) — Campaign Life Coalition is asking supporters to fight back against a proposed Liberal law that will ban pro-life witness outside abortion centers.

So far, 1,343 people have signed the online version of Campaign Life’s petition, plus a couple thousand more who mailed in signed hard copy versions, but that number needs to skyrocket, he told LifeSiteNews.

Ontarians need to push back against the Liberal overreach that tramples on their Charter right to freedom of speech and expression, he said.

If passed, Bill 163 will automatically ban pro-life activity within 50 meters of the province’s eight “dedicated” abortion centers, a distance that could be increased to 150 meters on request. When an abortion facility moves, the bubble zone moves with it.

The law will also automatically establish 150-meter bubble zone around the homes of abortionists and abortion center staff.

These zones will move with abortion providers, to “protect” them wherever they are, Naqvi said in a press conference Wednesday.

The bill allows any healthcare facility that commits abortions to apply for “safe access” zones of up to 150 meters.

That includes pharmacies, which under Ontario’s health insurance plan can now dispense the abortion pill for free.

Some of  the activities outlawed within the zones are:

advising, persuading, or attempting to  advise or persuade, a person to refrain from accessing abortion services;

informing or attempting to inform a person concerning issues related to abortion services, by any means, including oral, written or graphic means;

performing or attempt to performing an act of disapproval concerning issues related to abortion services, by any means, including oral, written or graphic means.

The Liberals’ proposed bill is an attack on free speech, says Fonseca.

“Are we living in the communist former Soviet Union? Or the Chinese communist dictatorship? How can it be that our supposedly ‘democratic’ and ‘free’ nation is punishing its citizens with prison for expressing an opinion of ‘disapproval’ over a subject of active political discourse?” he pointed out.

“Whether it’s abortion or some other controversial topic, expressing our opinions – and yes, even disapproving opinions – should never be punishable with jail.”

Even Liberal and NDP MPPs who consider themselves “pro-choice” have a good reason to vote against this bill, he stressed.

“No matter what your position is on abortion, if you respect our constitution and the Charter, then you will vote against a law which seeks to take away the right of some citizens to freedom of speech and freedom of assembly,” Fonseca said.

“These are fundamental rights that are written into our nation’s constitution. Every MPP therefore has an obligation to vote against this strident attempt to discriminate against a particular segment of society – pro-life Canadians.”

Not only is Bill 163 unconstitutional, it also harms the women the Liberals claim to help, Fonseca said.

As the petition points out, “thousands of cases of Canadian women who changed their minds about abortion after speaking to pro-lifers or taking literature during peaceful demonstrations, and who expressed gratitude, is proof that pro-life information is desired and appreciated by many women entering these facilities.”

Fonseca said Campaign Life will organize petition signatures by electoral district and deliver them to each MPP with a twofold request: present the petitions out loud in the legislature on behalf of their constituents, and commit to voting against the totalitarian bill.

“We’re hoping to present petitions to all 107 Ontario MPPs,” he told LifeSiteNews.

“They need to know the people they’re being paid to represent don’t agree with taking away the constitutional right to free speech from a certain class of citizen, just because those citizens hold a different opinion than that of Kathleen Wynne,”said Fonseca.

“We want to put MPPs on notice that if they vote in favour of this legislation, voters will remember it at the ballot box in the 2018 general election.”