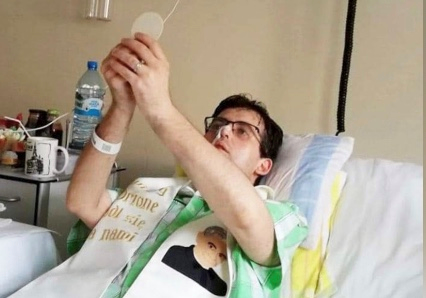 WARSAW, Poland, May 31 (LifeSiteNews) ― A cancer-stricken seminarian was ordained to the priesthood last week as he lay in a hospital bed.

Father Michał Łos, who is seriously ill, was ordained to the diaconate and the priesthood last Friday, May 24 in the oncology ward of the Military Hospital in Warsaw by Bishop Marek Solarczyk, 52. He was surrounded by his religious superiors, other members of his order and his family.

A member of “The Little Work of Divine Providence,” an order founded by St. Luigi Orione, Łos had taken his final monastic vows of chastity, poverty, obedience and loyalty to the Pope the day before.

According to Polish media, Łos comes from Dąbrowa Tarnowska, a town in southern Poland, and was studying at a theological seminary in Ołtarzew when, shortly before Easter, he was diagnosed with a rapidly-growing cancer. His religious superiors decided to allow him to take his final vows and also applied to Pope Francis for a dispensation so that he could be ordained a deacon and a priest in the same Mass.

The young priest’s greatest desire was to celebrate his first Mass. Fearing the he would not live long enough or have the strength to do so, Łos’s order published video and photographs of his ordination and appealed to the Polish nation to pray for him.

Daria Pietrzak of Częstochowa told LifeSiteNews that “an ocean of prayer” for the young priest came from “all over Poland,” and his dream came true: He was able to celebrate his first Mass.

“This story moved me very much,” she added in Polish. “The desire of this young priest to become a priest, to be able to celebrate even just one Mass, was amazing.”

“Neither illness nor life was important to him; his only goal was to unite himself with Christ and celebrate just one Mass,” she continued

Pietrzak said that so many well-wishers flocked to the hospital to visit Łos that his order had to ask people over Facebook not to come. The Orionists explained that he is too ill to receive but just a few visitors and that his family must have priority.

Pietrzak believes that the young man’s earnest desire to become a priest before his death was a “magnificent sign for Poland” given by God so soon after the release of a documentary about clerical sexual misconduct, Jeszcze nie mów nikomu (“Tell No One.”)

“We should pray for all priests at all times,” Pietrzak added.

Filip Mazurczak, a Polish-American student in Kraków, told LifeSiteNews today that there still does not seem to be a noticeable loss of faith in Catholicism in Poland since the documentary’s release.

“The last Thursday of every month they hold what's known as “Chrystus w Starym Mieście” (“Christ in the Old City”) ― Mass and then Eucharistic adoration. The basilica was packed. Not only was there no room to sit, but there really was no place to kneel, either. Almost every square inch of the church was covered with people, the majority of whom were 25-35 years old,” he continued.

“Of course, this is just one church,” he admitted.

“I think, though, that most practicing Catholics in Poland are able to separate the sins of some priests from the substance of the faith and realize that we go to church to encounter Christ, not the priest.”