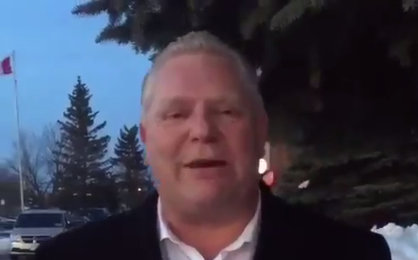 TORONTO, March 6, 2018 (LifeSiteNews) — Ontario Progressive Conservative leadership contender Doug Ford says parents should be told and have a say when their minor daughters seek out an abortion.

“Kids can’t even get their tonsils out without the approval of their parents,” Ford told the CBC while campaigning in London. “I think we’ve got to consult parents, and that’s what we have to do.”

Ford brought the subject up to a London crowd, the Toronto Star reported.

“My friends, you have to give a note to your kids when they’re 12 and 13 years old to go on a field trip. You have to approve even getting their tonsils out, but you don’t have to approve and keep secret with a 12- and 13-year-old?” in regard to abortion, Ford said, as quoted in the Star.

“I don’t know too many parents that would approve any of their kids going on a field trip without their knowledge. I don’t see anyone ever approving an operation on their children when they’re 12 and 13 years old without approval,” he said.

“I don’t know why politicians are afraid to talk about this,” Ford added.

Ford’s remarks created a stir in the media and backlash from Elliott, who is reported to be his closest rival. Elliott suggested to the CBC that Ford was playing for votes. Polls put the two as neck-and-neck frontrunners in the race.

The Campaign Life voter guide ranks Granic Allen, who has promised to repeal the Liberal government’s sex-ed curriculum, as number one.

And while Campaign Life has given Ford a “yellow-light” rating, which means it has areas of concern, it puts Ford as second choice on the ranked ballot.

And it has “red-lighted” Elliott and Mulroney as absolutely not supportable, based on the former’s past voting record and statements, and the latter’s current campaign platform. To see the full guide, go here.

When it comes to minors and abortion, “we commend Ford for supporting, in principle, a common sense piece of legislation that the overwhelming majority of Ontarians — especially those who are, or have been parents — would consider very reasonable,” says Jack Fonseca, Campaign Life Coalition senior political strategist.

“My child’s school has to obtain parental authorization to administer aspirin to my kids. But if an 11-year-old girl gets pregnant, abortion facilities and the medical system should be able to hide invasive surgery from parents? Only an extremist nut-job would think that makes good legislation.”

Under Ontario’s Health Care Consent Act, it’s the doctor, not the parents, who has the authority to decide that a patient under age 16 “is capable of giving valid consent” to treatment, confirmed lawyer Geoff Cauchi.

And because the decision is deemed confidential under the Personal Health Information Protection Act, a minor, no matter how young, could have an abortion — or, indeed, any medical treatment — without parents knowing, he told LifeSiteNews.

Indeed, all of Ontario’s abortion facilities declare on their websites a parent’s consent is not required. In one egregious example, a Toronto abortion center assures would-be customers that they would keep a 14-year-old’s abortion secret from her parents.

“The child is treated as an adult and the information is kept secret from parents,” observed Cauchi, who contends the health care consent law is unconstitutional.

“This is incredible,” he said. “Basically, the health practitioner decides whether or not your Charter rights as a parent will be infringed.”

“Secondly, a policy of hiding underage abortions enables sexual abuse. One of the little-known negative consequences of today’s widespread availability of surgical abortion is that sexual abusers of young girls are using abortion-on-demand to cover up rape and abuse,” he said.

“If Doug Ford wins the leadership, becomes Premier, and follows through with a parental consultation law, he will be doing something concrete to prevent sexual abusers from being able to cover up their crimes,” Fonseca said.

“That’s something he should be applauded for, and it’s further justification for CLC having ranked him as the #2 ballot choice in the leadership contest.”

He told CLC that he “would bring forward conscience rights legislation to protect doctors from being coerced by the College of Physicians & Surgeons to participate in (or give referrals for) euthanasia and abortion,” the guide notes.

The hasty PC Party leadership race, which comes three months before Ontario’s June 7 general election, was organized after leader Patrick Brown resigned January 25 amid allegations of sexual misconduct that he denies. Brown entered the race for 10 days but withdrew to focus on his legal battle with CTV News, which first aired the allegations.

Party members are voting online for their new leader from March 2 until 8 p.m. March 9. To be eligible to vote, they must complete a voter verification process no later than noon March 7. The winner will be announced at a party convention in Markham on March 10.