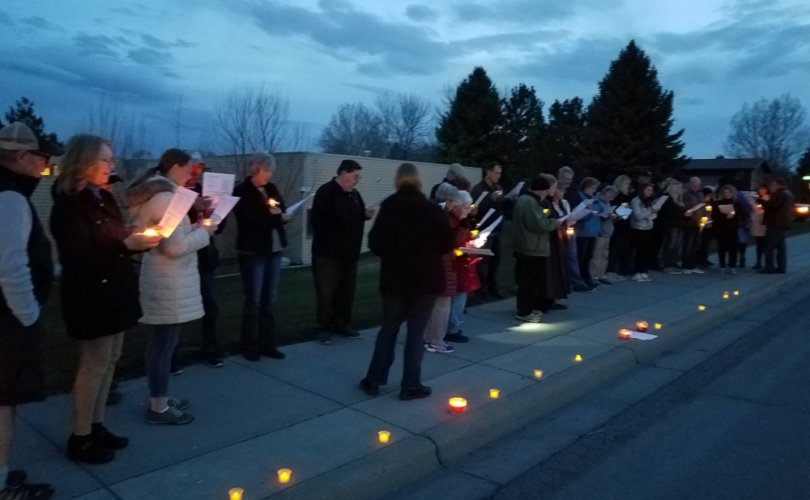 A candlelight vigil inspired by the movie Unplanned taking place in Billings, Montana.

April 15, 2019 (LifeSiteNews) — Organizers are calling the National Pro-Life Candlelight Vigil this past weekend outside abortion mills an outstanding success. The vigils were inspired by the chilling look inside the abortion industry as portrayed in the recently released movie Unplanned, which tells the story of Abby Johnson, a Planned Parenthood manager turned pro-life activist.

Altogether, there were 166 vigils at Planned Parenthood facilities across the nation, in 40 U.S. states in six time zones. The total turnout is estimated to have been more than 10,000, according to local leaders — including many for whom this was their first time taking part in pro-life activism. Those numbers topped original estimates.

Many of the attendees said they were inspired to participate because of having seen the movie Unplanned. The Unplanned movie has seen unanticipated commercial success, despite various efforts to squelch awareness due to its pro-life message.

“Many of them were first timers, inspired by what they saw in the move Unplanned,” said Eric Scheidler, executive director of the Pro-Life Action League. “It really woke them up to the reality of abortion, to come out here and be a part of this pro-life mission.”

The vigils were held outside Planned Parenthood locations throughout the United States on Saturday and were arranged by the Protest Planned Parenthood (#ProtestPP) collaboration of the Pro-Life Action League, Created Equal, and Citizens for a Pro-Life Society, along with more than 75 local, state, and national pro-life groups.

Local clergy spoke at many additional locations, as did post-abortive women who shared their individual accounts of regretting the choice to abort their children.

In Colorado Springs, Bishop Sheridan led some 200 people in prayer. Those present also heard from Sue Thayer, another former Planned Parenthood manager who has become a pro-life advocate.

The Colorado Springs vigil began at 11:24 A.M.., to coincide with the Scripture verse of Mark 11:24, which reads: ”Therefore I tell you, all that you ask for in prayer, believe that you will receive it and it shall be yours.”

The largest reported crowds were 350 in Aurora, Illinois; 2o0 in Marietta, Georgia; and 275 in Kalamazoo, Michigan.

Pro-abortion counter-protesters turned out in a few of the vigil locations as well.

While the vigils overall were a success, there was a tragic incident of violence in Kentucky, where a longtime pro-life advocate was assaulted after offering post-abortion material to a post-abortive mother outside the facility, sustaining serious injury.

According to a social media post from the pro-life advocate’s niece, her aunt reportedly suffered a head injury and a broken femur after being pushed to the ground by the woman to whom she’d offered the information and was taken via ambulance for treatment.

Scheidler said in a video from his location of Aurora, Illinois that organizers hoped people would take what they gained from the Unplanned movie and use it to defend life.

“We’re really encouraging people to take those feelings of sorrow and sadness, what they saw in that movie, and also that feeling of gratefulness to God’s mercy that Abby Johnson was shown, and turn that into action,” he said. “Turn that into going out into the front lines, being part of this movement.”

He listed praying at Planned Parenthood during a vigil, sidewalk counseling, volunteering at a pregnancy center, supporting pro-life groups, getting involved legislatively, talking to neighbors and becoming informed.

“There’s so much that you can do,” Scheidler said, “but do something. Be a part of this movement actively. It’s the only way we’re going end abortion.”