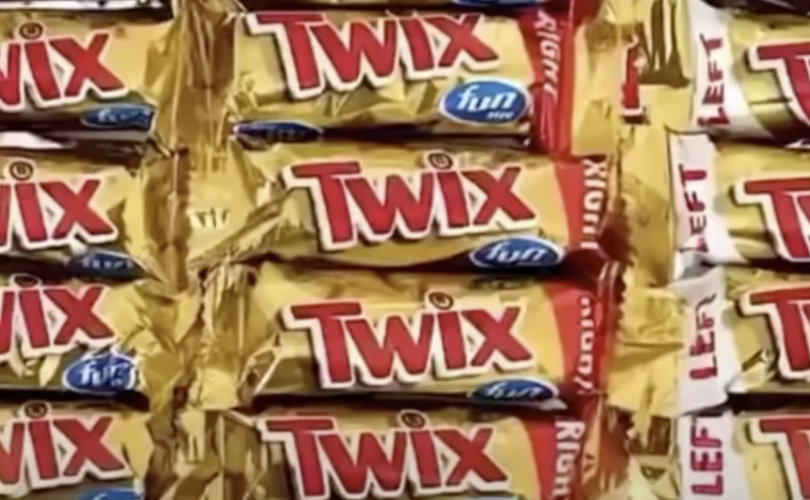 (LifeSiteNews) – Twix candy bars – produced by candy manufacturing giant Mars, Inc. – has launched an online video commercial promoting transgenderism to young, gender-confused boys while also warning other children who think that a boy dressed like a girl is “weird” that they will be subject to banishment, silencing, and possibly death by witchcraft.

The disturbing Halloween candy ad begins with a lonely boy dressed in a purple princess costume playing by himself when a woman dressed as a goth-like witch, attired completely in black, shows up at the front door announcing that she is his new nanny.

The duo bond, and head off to the local park where another boy criticizes him, saying, “Hey Princess, you look like a girl. Why are you wearing that?”

“You look weird, your nanny looks weird, you guys are both weird,” the boy says.

Disgusted by the boy’s declaration, the nanny-witch summons her powers, and a strong wind quickly blows the boy away, perhaps to the netherworld.

The nanny-witch and the boy in the princess dress then walk off hand in hand.

“No one in the history of mankind has ever changed their gender,” said Walt Heyer, a man who underwent surgery to make himself appear like a woman and lived for eight years as “Laura.” He later experienced regret and “de-transitioned,” reverting to being himself — Walt — once and for all. Walt also helps those seeking to de-transition via his website, exchangeregret.com.

Interestingly, Walt’s gender confusion began as a small boy when his grandmother began secretly dressing him in a purple dress, much like the purple princess dress seen in the Twix commercial.

“The message delivered by the Twix commercial is psychologically and emotionally destructive,” Heyer explained.

What Twix and the creative team behind the ad are revealing is, “if you read between the lines, that transgenderism is witchcraft. This is indoctrination [aimed at] separating children from God.  This is how you divide children from God and bring them into the LGBT world, which is a form of witchcraft ideology.”

“The nanny-witch in the commercial is saying, ‘Come with me, you don’t need God,’” Heyer emphasized.

“Corporations produce ads like this for one reason: They are fearful of LGBT forces. They know that if they don’t march in lockstep with LGBT ideology, they will be canceled,” Heyer said, “so instead, Twix has chosen to ‘cancel’ God.”

The canceling of God is seen also in the “canceling of male and female” in today’s popular culture, Heyer explained. “Male” and “female” are biblical terms, not just social or academic constructs, so they are under severe attack.

Kevin Whitt, a former transgender who is now a pro-family activist seeking to protect children from LGBT indoctrination and exploitation that has injected itself into every sector of society, agrees with Heyer.

“The real agenda here is not the push for equality like the LGBT activists would like for you to believe. The real agenda has always been to destroy the nuclear family to usher in a Marxist agenda,” said Whitt, who now spearheads the The Whitt Project.

“The producers of this Twix commercial are using Halloween as a vehicle to push transgender ideology,” Whitt said. “They want to destroy the traditional idea that there are only two genders. But going against God’s design only leads to destruction.”

We have seen time and time again people who have chosen to live a transgender life have severe emotional and mental trauma that last a lifetime. No matter how many surgeries they have or hormones they take, very few are happy with who they become. A study conducted in Sweden has shown that post-operative transsexuals are 20 times more likely to commit suicide.

We are seeing more and more people choose this transgender lifestyle because it’s being pushed on people and normalized. There is nothing normal about it. God designed male and female, period.

I lived that life for many years. I could go on and on about the harms.

“Changing one’s outward appearance will not bring healing,” he added.

Two years ago, Heyer was one of nine former transgendered persons to have filed an amicus brief with the U.S. Supreme Court hoping to dissuade the court from requiring employers to affirm gender confusion. They offered their personal histories as cautionary tales in order to inform the justices of the often-tragic unintended consequences that occur when males attempt to live as if they were females, and females as males.

The nine amici were David fighting against Goliath, as more than 200 behemoth corporations such as Amazon, Apple, Disney, Starbucks, and Coca-Cola joined together to urge the court to accept an expanded meaning of “sex” discrimination, contorting it to include “sexual orientation” and “gender identity.”

The nine brave souls argued that affirming gender confusion and encouraging medical and surgical transitioning is akin to addressing an anorexic person’s needs by providing a low-calorie diet, diet pills, and stomach stapling. They said:

People are encouraged, affirmed and assisted in “coming out” as transgendered, often without one word about the dangers of that path. Today, the politically correct response expected from adults, especially parents, is to affirm children and adults in their desired gender. But affirmation gives people false hope that they can really become a different sex.

It is a lie — a lie told with compassionate motives, but a lie nonetheless. Lying is not compassion.

The effect of such “affirmation” is the destruction of core identity. It plants the notion inside the minds of people that the essence of who they are is wrong. They are not someone to be loved or embraced, but eradicated.

BBDO, the advertising agency behind the ad, claims that they are out to create a culture “open to the new” while warning that “sacred cows and golden calves are two species that don’t do well” at their company.

In 2019, the same ad agency created a deeply disturbing commercial that depicted menstruating men and boys.

BBDO is clearly on a mission to attack immutable truths. As the commercial closes, “If we all had them, maybe we’d be more comfortable with them,” appears on the screen, followed by, “Thinx: Underwear that absorbs your period.”