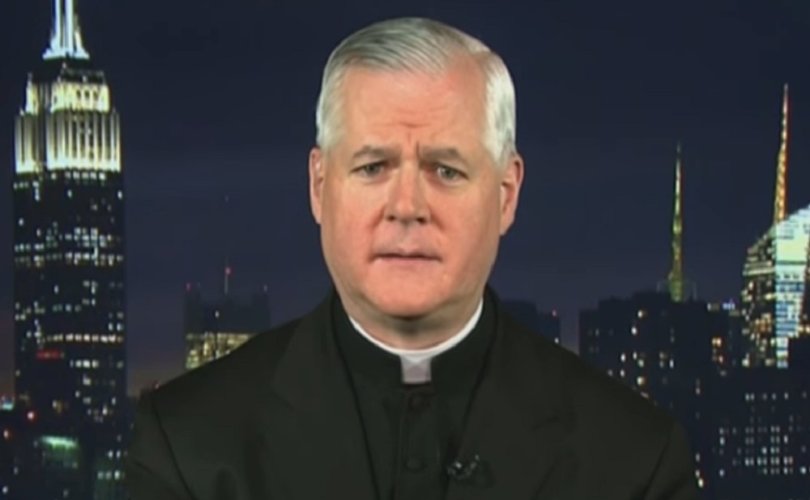 ROME, October 11, 2019 (LifeSiteNews) — Reacting to Pope Francis’s participation in a “pagan religious ceremony” on the grounds of the Vatican, a canon lawyer said on EWTN’s The World Over that the ceremony was “horrendous” and that Catholicism is supposed to “overthrow pagan false notions,” not be taught by them.

On October 4, Pope Francis observed as an Amazonian woman led a ritual in the Vatican gardens as part of a tree-planting ceremony. The woman, bedecked with a traditional feather headdress, prostrated herself before the tree and a pair of statues of naked pregnant women. The indigenous woman also shook a rattle in an apparent blessing or incantation over the group at the ceremony, who included a Franciscan friar. Some members of the group prostrated themselves or knelt during the ceremony, while the pope stood by.

On Thursday evening, EWTN television news host Raymond Arroyo interviewed editor Robert Royal of The Catholic Thing and canon lawyer Fr. Gerald Murray of the New York archdiocese to get their reactions to controversy over the pope and his participation in a “pagan” ceremony.

Fr. Murray said, “The ceremony can be accurately described as a pagan religious ceremony and that false goddess, Pachamama — who is like a creation god — this is horrendous, I have to say, no matter what the intention of those who invited those people there. It’s quite clear that that was a pagan religious ceremony with religious meaning to them. This should not be — ever occur in a Catholic institution, certainly not in the Holy See.”

Saying that he regretted the pope’s participation, Murray said: “Paganism is not here in the Earth to teach Catholicism. It’s the other way around. Catholicism is meant to overthrow pagan false notions.”

“The kick-off of the Amazon Synod was a very strange tree-planting ceremony on the feast day of St. Francis in the Vatican gardens behind you,” Arroyo said on the show. Referring to the wooden statues at the ceremony, Arroyo said, “Some say this was the Virgin Mary, Our Lady of the Amazon, visiting Saint Elizabeth.”

Asking for a reaction to what Arroyo called a “fertility god,” Royal answered that “something … is starting to characterize this synod in a strange way. Something unique, something that we’ve never seen before on the Vatican grounds took place. … No one has been able to interpret it. No one wants to take responsibility for how it was organized or who permitted it and why the pope was there and what it meant for him to be a witness as this was going on.”

As to its effects, Royal said it caused “…tremendous confusion, especially after many people before the synod even started were pointing out the dangers of this kind of syncretism[.]” He said it brought in “native elements that don’t really accord well with Catholicism,” that are “confusing and lead us down strange paths.” He added, “I think that the fact that no one can explain this is an additional problem, besides the fact that something that is not Christianity was celebrated on the grounds of the Vatican itself.”

Arroyo observed that Pope Francis abandoned his prepared remarks at the conclusion of the ceremony. The pope “cast aside his prepared remarks, said an Our Father, and he left,” Arroyo said. “I read that as sort of a subtle rejection of what he had just sat through,” he concluded.

Royal said that at the point of the pope’s departure, he had been standing for about one hour in the sun and appeared fatigued. But he added, “Even this we cannot read with any great degree of clarity, and one of the problems with this papacy is the way that ambiguity and a lack of clarity has led to people having very grave doubts, and then — now we have a generalized mistrust when a situation like this arises.”

A native Amazonian leader, Jonas Marcolino Macuxí, told LifeSiteNews that what he observed of the tree-planting ceremony at the Vatican was “pagan,” as evidenced by the smoke pots there that were intended to ward off evil. “It’s 100 percent pagan,” he averred through an interpreter. Macuxí is a trained lawyer who asserted in the interview that there are bishops and priests imbued with Liberation Theology concepts who are taking advantage of Amazonian people while urging them to return to ancestral life ways. Formerly Catholic but now an evangelical Protestant, Macuxí said, “My main concern is to unite people: Brazilians, whites, Indians, people from the rest of the world because the visions are being exploited, they’re being promoted and these can only lead to a major breakdown of society that we have to avoid in order for everyone to progress — Indians, whites, et cetera — and have a decent life and freedom.”

In another LifeSiteNews interview, Rexcrisanto Delson said he was appalled to learn of the pagan ceremony at the Vatican. “I saw the ceremony that was performed in the Vatican garden and couldn't believe my eyes,” Delson told LifeSiteNews. Referring to the earlier interview with Macuxí, Delson said, “I later learned that an Amazon tribal leader confirmed it was purely pagan. Did the Catholics who participated and supported such a vile act not know it was pagan?” Delson said, “There’s no excuse from here on out to claim they didn’t know they were violating the First Commandment,” while quoting Psalm 95:5 in saying that “all the gods of the Gentiles are devils.”

Anthropologists identify “Pachamama” or “world mother” as a fertility goddess revered by the indigenous people of the Andes. The Quechua and Aymara peoples of the Andean region erect shrines to Pachamama at hallowed rocks and trees. She is depicted as an adult woman who is self-sufficient and creative in sustaining life on Earth. Among some native peoples after the European conquest of the 1500s and Christianization, Pachamama was often confused with the Virgin Mary. However, in pre-Conquest times, she was often a cruel goddess, greedy for human sacrifice, especially of children.