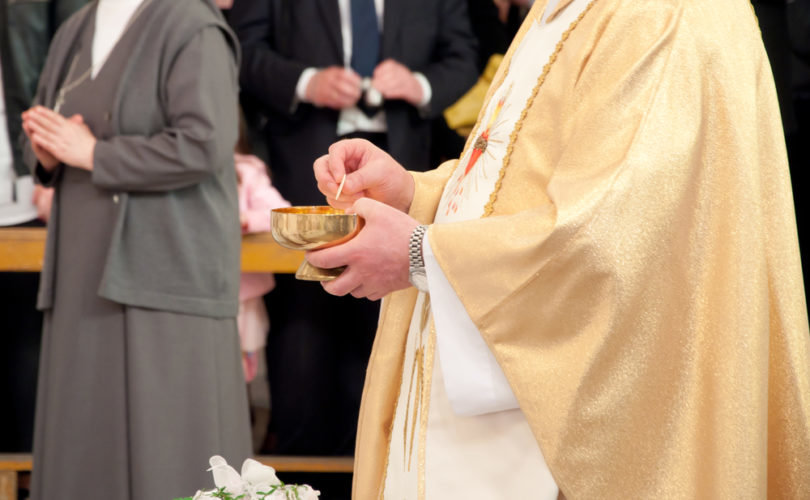 May 19, 2017 (LifeSiteNews) – A canon lawyer told priests at a workshop run by a U.S. diocese that Pope Francis’ Amoris Laetitia has allowed them to break with the Church’s tradition practice of refusing Communion to “remarried” Catholics.

Since the diocesan bishop has not issued his own guidelines on the Pope’s exhortation, the canonist said, the priests can follow the controversial interpretations from the bishops of Malta and Buenos Aires.

The workshop was recorded and shared anonymously with the Catholic group Mary’s Advocates. The group posted the recording on their website with identities redacted.

“Now, we don’t have any guidelines,” the canon lawyer stated. “However, if priests want a little bit of insight into things that can be done, there are other areas that have put forth guidelines. Most notably, the Buenos Aires pastoral region has put out guidelines for their priests.”

She then referred attendees, which included some priests, to a website run by a lay canonist that included the Buenos Aires and Malta guidelines.

“The document from Buenos Aires as well as Pope Francis’ letter of approving — I don’t want to say approving, but saying that they are good guidelines — are on that,” the canon lawyer told the audience.

The Buenos Aires and Malta directives were the first to outright say Amoris Laetitia could be interpreted as allowing Communion for Catholics living in objectively sinful situations. Other areas such as Chicago and San Diego have indicated they would follow.

Pope Francis still has not responded to an inquiry from four cardinals requesting clarification on whether he intends the document to allow Catholics to circumvent Church teaching on Communion for individuals living in non-marital unions.

Last September, the bishops of Buenos Aires issued their directive to priests in their jurisdiction allowing Holy Communion for divorced and remarried Catholics. The document closely quoted Amoris Laetitia.

The bishops said that in “complex circumstances” when a remarried couple could not “obtain a declaration of nullity” priests can still grant them access to the Eucharist.

If a priest recognizes that “in a particular case there are limitations that diminish responsibility and culpability, particularly when a person judges that he would fall into a subsequent fault by damaging the children of the new union,” the directive said, “Amoris Laetitia opens the possibility of access to the sacraments of Reconciliation and the Eucharist.”

The canon lawyer repeated the latter statement at the recent diocesan workshop.

Pope Francis had written a letter to Argentinian Bishop Sergío Alfredo Fenoy at the time regarding the Buenos Aries directive, stating, “The document is very good and completely explains the meaning of chapter VIII of Amoris Laetitia. There are no other interpretations.”

The bishops of Malta had given the OK for divorced and civilly remarried Catholics in their dioceses to receive Communion in a document released this past January.

The Maltese bishops said at the time “there are complex situations” where living chastely, the Church’s requirement for rescuing Communion while in this situation, may be “humanly impossible.”

The U.S. canon lawyer repeated this idea as well at her recent workshop.

The Maltese bishops said divorced and civilly remarried Catholics in their dioceses could receive Communion if they manage “with an informed and enlightened conscience, to acknowledge and believe that he or she are at peace with God.”

They said as well that their guidelines are “in line with the directions given by Pope Francis.”

The canon lawyer said this issue was one of personal and pastoral discernment, again using language from the document and also the controversial Synods on the Family from which it was reportedly derived.

“Listeners are set up, in the beginning, to be ready to learn which ecclesiastical man-made law has been changed by Amoris Laetitia,” Macfarlane said.

“By the end of her presentation, listeners will believe that for a time (between the year 2000 and 2016), priests were restricted from telling those in second marriages that they cannot receive Communion without abstaining from sex, if they don’t have an annulment,” she continued. “Listeners will believe that Amoris Laetitia reversed and lifted that restrictive man-made law. So now priests can again tell parties to go to Communion after accompaniment and discernment.”

The canon lawyer had also said during her presentation that telling someone not to have sex is not a good thing because you are taking away one of the basic aspects of marriage. However, she said this in regard to Catholics living a second marriage without an annulment.

“If the Church should never tell adulterers not to have sex,” she continued, “then using the same logic the Church should not tell two high school kids to not have sex, or tell the man cheating on his wife that he should stop having sex with is new, young girlfriend.”

The full recording can be accessed HERE, and has been shared with the diocese for which the canon lawyer works.