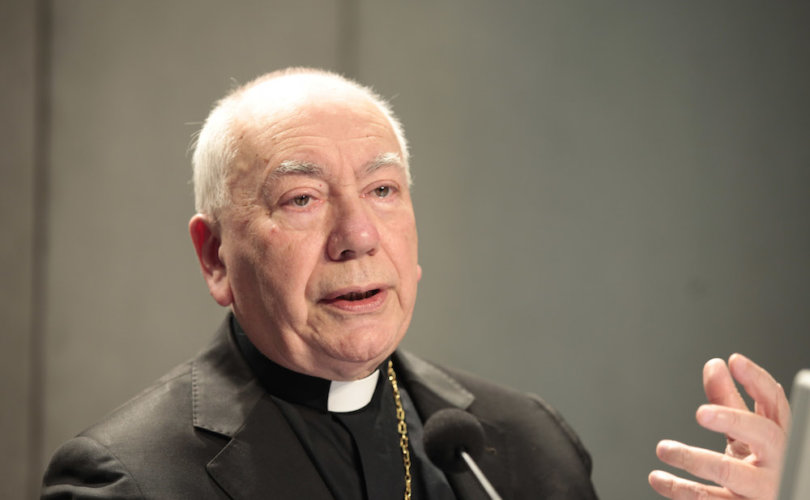 ROME, February 14, 2017 (LifeSiteNews) — The Vatican Cardinal tasked with interpreting Church law says that Catholics in so-called irregular unions “must be given” Holy Communion.

Cardinal Francesco Coccopalmerio, President of the Pontifical Council for the Interpretation of Legal Texts, says cohabitating couples and the divorced and remarried merely need a “desire” to change their situation, even if they “can’t act on their desire” because it might lead them into “new sin.”

Cardinal Coccopalmerio compiled his thoughts on the matter in a 30-page book released by the Vatican's own publishing house last week. The book is titled The eighth Chapter of the post-synodal apostolic exhortation Amoris Laetitia.

Despite his book's promotion by the Vatican, Coccopalmerio makes it clear that he is not writing in the capacity of the Vatican’s canon law expert, but only as a Catholic theologian who is trying to “unpack [Amoris’s] rich doctrinal and pastoral message.”

Divorced and remarried, unmarried couples living together, are certainly not models of unions in harmony with Catholic doctrine, but the Church cannot look the other way. For which reason the sacraments of Reconciliation and Communion ought to be given also to so-called wounded families and to those who, even though living in situations not in line with the traditional canons on matrimony, express a sincere desire to draw closer to the sacraments after an adequate period of discernment.

Coccopalmerio explains that the Church “could admit to Penance and Eucharist the faithful who find themselves in illegitimate unions [who] want to change that situation, but can’t act on their desire” because “they would fall in a new sin.”

According to Coccopalmerio, it is too much to ask cohabiting couples as well as those in adulterous unions to forgo sexual relations. Without sexual intimacy, he writes, the temptation grows to be unfaithful and find intimacy elsewhere.

He then comments on Amoris’ passage 301 dealing with pastoral discernment. He writes that if such a couple finds it too difficult to live like brother and sister, they are not obliged to do so. They represent, he writes, what the pope calls a “concrete situation which does not allow him or her to act differently and decide otherwise without further sin.”

He gives the example of a woman who is committing adultery with a married man whose spouse has abandoned him and his three children. The new woman has been with the man for 10 years, has helped him raise the children, and has given the man another child.

“The woman of whom we speak is fully aware of being in an irregular situation. She would honestly like to change her life,” he writes. “But evidently, she can’t. If in fact, if she left the union, the man would turn back to the previous situation, the children would be left without a mother.”

If she were to leave the union, she would be abandoning her duties toward the children. “It’s then evident that this couldn’t happen without ‘new sin,’” he writes.

Coccopalmerio’s interpretation of Pope Francis’ exhortation contradicts one given two weeks ago by the Vatican’s doctrinal chief, Cardinal Gerhard Müller.

Müller, head of the Vatican’s Congregation for the Doctrine of the Faith, issued a strong rebuke at the end of January against bishops who use the pope’s exhortation to justify Communion for those in adulterous unions.

“Adultery is always a mortal sin and the bishops who create confusion about this must study the doctrine of the Church,” he said at that time.

“It is impossible for there to be a contradiction of doctrine and personal conscience. For example, it cannot be said that there are circumstances according to which an act of adultery does not constitute a mortal sin. For Catholic doctrine, it is impossible for mortal sin to coexist with sanctifying grace. In order to overcome this absurd contradiction, Christ has instituted for the faithful the Sacrament of penance and reconciliation with God and with the Church,” he added.

“Coccopalmerio’s advice not only facilitates the irreverent reception of holy Communion, it tends toward giving what the Church has always recognized as classical scandal,” he wrote on his blog.

“Evelyn Waugh’s character Charles Ryder described his friend Sebastian’s protracted acts of self-destruction as 'a blow, expected, repeated, falling upon a bruise, with no smart or shock of surprise, only a dull and sickening pain and the doubt whether another like it could be borne' (Brideshead Revisited, 1945). I thought of Waugh’s words as I read…Coccopalmerio’s new short book,” he wrote.

Some speculated that Coccopalmerio’s book would be Pope Francis’ indirect attempt to answer the dubia submitted to him by the four Cardinals last year. The four asked him at that time if Amoris Laetitia conforms to Catholic teaching on marriage, the Eucharist, and the role of conscience in decision-making.

The book comes in the wake of various bishops and bishops’ groups using the Pope’s exhortation to allow Communion for adulterers.

These include San Diego Bishop Robert McElroy, the bishops of Buenos Aires, the Maltese bishop, and recently the German bishops.

“A practice which permits to those who have a civil divorce, the so-called ‘remarried,’ to receive the sacraments of Penance and the Eucharist, notwithstanding their intention to continue to violate the Sixth Commandment and their sacramental bond of matrimony in the future, would be contrary to Divine truth and alien to the perennial sense of the Catholic Church,” they wrote.

Kazakhstan Bishop Athanasius Schneider has criticized pastoral guidelines allowing Catholics who have civilly divorced and remarried, and who are not living in continence, to receive Communion as giving them “permission to not observe…the Sixth Commandment.”