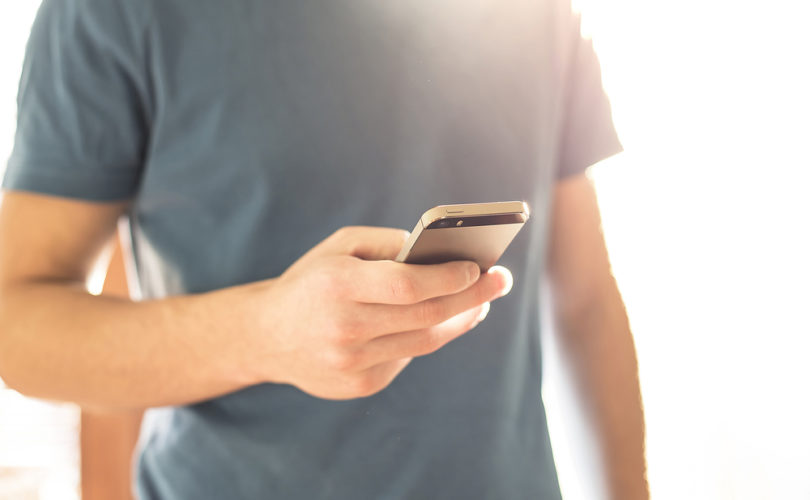 “The fight for freedom from pornography is a battle you can win. But, every battle needs a plan,” say the developers of “Victory,” released this week for the iPhone.

“Victory,” available for free at Apple’s App Store, provides what its creators call a “strategic battle plan for liberty in the struggle against pornography.” The app along with a sleek website was created by LifeTeen’s Mark Hart and Catholic apologist and anti-porn speaker Matt Fradd.

So far, the app is generating an astounding number of users. On the first day of its release it was downloaded 1,500 times. Now, two days later, it has been downloaded 40,000 times.

Most importantly, there is an “accountability button” where users can choose up to three accountability partners. In a moment of temptation, users can press the button and partners will be notified on their phones (even if they’re locked) that the user is in need of prayer. Partners can also periodically connect with the user to see how the battle is going.

An in-app purchase for $1.99 gives the user access to “The Victory Book” consisting of over 50 snippets of wisdom to educate, inspire, and motivate the user when they are struggling. All money raised from the book goes right back into further developing the app. Developers are hoping to raise enough money to release an Android version this summer.

One piece of advice from the Victory Book encourages users to “shut the door” to occasions known by the user to lead to a fall.

“The devil tends to enter through the doors we purposely leave open. Consider where your entry points are for the evil one. What ‘doors to your soul’ do you intentionally leave open to sin? Do you stay up late with no one else around? Do you have certain sites or favorite apps that only put more temptation in your path? Are your favorite shows or movies leading you toward light or surrounding you with darkness? Spend time on your phone, your computer, and in your room to delete and eliminate any entry points. Close the door of your heart (and your bedroom) to the devil and bar it shut… there’s no point in making your battle more difficult,” states the advice.

“I think what's really important is that we stop looking at victory from pornography as a destination, and start viewing it more as a daily choice,” he said.

Reviews of the app appearing on the iTunes store have been all positive.

“I can't believe no one else thought of this marvelous idea in order to help others out there with addictions or just simple weakness against certain sins! It's a truly great reminder that we must always battle against temptation and stay away from it in every scenario. God bless those who made this app and help those who are in need of it so that they may hear of it and use it to be victorious over sin,” wrote one.

“Has everything I've ever wanted in an app!! I've tried to do what this app does using a combination of other apps but this does it all and it's free! It's awesome to see Christians using technology to step up in the way this app does!!! Get the app. Get accountable. Get freed. Get on the #Victory train,” wrote another identifying as a 17-year-old male.

“This app is simple, clean, and easy to use. A great app that offers so much – helping someone see their triggers and being able to contact accountability partners with just a tap. Great job Life Teen,” wrote another.

Donations can be made to support the release of the Android version of the app at Thevictoryapp.com.