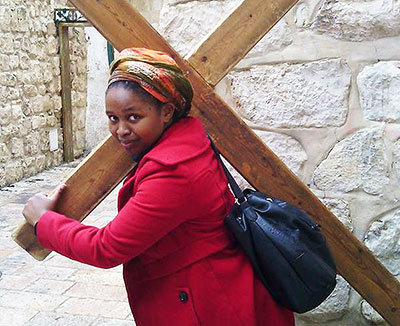 CAPE TOWN, South Africa, August 6, 2015 (LifeSiteNews) – The University of Capetown has ordered Christian student leader Zizipho Pae restored to her seat on the Student Representative Council, which expelled her July 21 at an irregular meeting hijacked by an LGBT gang.

Pae told LifeSiteNews: “My biggest regret is that I have lost friends within the LGBT community. … Homophobia is the hatred or the fear of someone because of their homosexuality.” This does not describe her views at all, she said. “We need to draw a line between homophobia and being a Christian.”

Pae had offended against homosexual sensibilities by posting a comment on her Facebook page regretting the U.S. Supreme Court ruling on same-sex “marriage”. She wrote, “We are institutionalizing and normalizing sin! Sin. May God have mercy on us.”

Cape Town U’s vice chancellor Max Price wrote Miss Pae that after investigating the details of the meeting that expelled her he had obtained a legal opinion and determined  “that the decision to expel you as a member of the SRC is invalid.” LifeSiteNews has obtained a copy of the letter.

Price added, “I have therefore written today to the SRC calling on the SRC to recognise this and to accept that you remain an elected member of the 2014/2015 Students’ Representative Council.”

Miss Pae was first ousted from council in June, after the tiny but vocal homosexual minority on campus mercilessly attacked her character via social media, ransacked her office, and posed for lewd pictures promptly posted on Facebook.

That ouster was only temporary, however, because the council lacked a quorum over the summer. Therefore, a few days ago the full council met without notifying Pae and under physical pressure from a group of homosexuals ratified the previous decision.

Student council president Ramabina Mahata admits that when he tried to adjourn the meeting after raising procedural problems, he was physically detained by the homosexuals until the vote was taken.

“I was prevented from leaving by the Queer Revolution,” he told LifeSiteNews. “I had tried to delay the vote until we could hear back from legal experts” about the propriety of expelling Miss Pae.

Mahata declined to discuss the procedural problems about which he sought legal advice, but admits that, once was confined to his seat by the homosexuals, he was overridden by other councillors who proceeded with the vote against Miss Pae.

Miss Pae told LifeSiteNews this week, “The fact that I was kicked out at the request of a group of 50 people says a lot of about the strength of democracy on campus.”

Though tiny, the campus’ “Queer Revolution” has dominated campus discourse all year with its “transformation” agenda. They have even proposed a “Transform Religion” initiative aimed at re-educating Christian and Muslim students about the morality of homosexuality. Lately they are even offering counselling to anyone “traumatized” by the Pae controversy.

Miss Pae told LifeSiteNews she is deeply concerned “with how far society has deviated over the last 100 years from Christian teaching in terms of sex outside of marriage and perversion. Sin is not seen as sin.” She noted her younger sister was told by her teacher that, “If you are 14, sex is okay.”

Vice Chancellor Price had released an earlier statement that tried to strike a balance between Miss Pae’s supporters and critics, saying that Pae should expect her opinions about homosexuality to generate a “vigorous reaction and even protest. But this should to be done within an environment that is free from intimidation and harm. We therefore condemn the invasion and vandalism of Ms Pae's SRC office and other actions that exceed the bounds of legitimate debate and protest.”

Price also noted that the university had investigated complaints about Pae’s original Facebook posting and dismissed them as groundless.  “Ms Pae's Facebook statement was not considered a basis for a charge of a breach of the Student Code of Conduct.”

Miss Pae told LifeSiteNews she was disappointed that Christians on campus, who she believed greatly outnumbered the homosexual lobby, had not come to her defense publicly. “Christians are too quiet.” A member of an Evangelical church called “His People,” she said the controversy had strengthened her faith. “I’ve seen on a small scale what persecution of Christians is like. People are offended by Christianity and offended by the Gospel.  But I’ve seen the Lord’s faithfulness. He has sustained me.”