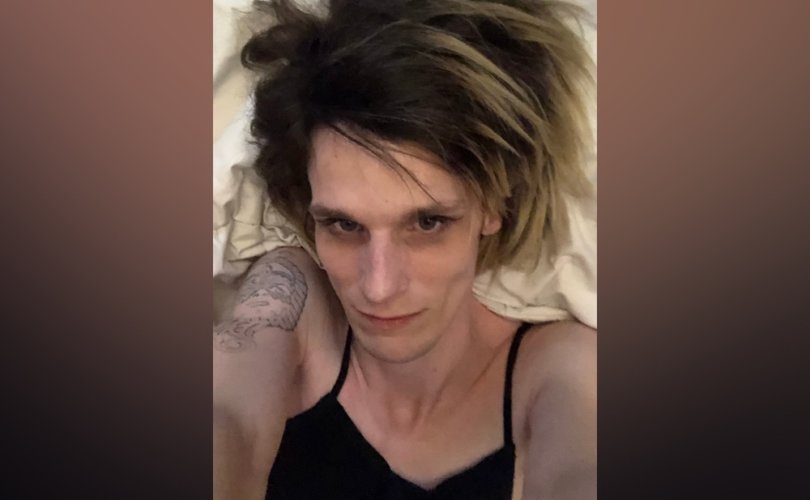 SEATTLE, Washington, August 1, 2019 (LifeSiteNews) ― If you believe that the computer engineer arrested on Monday for stealing the data of 106 million Capital One bank customers is female, it's likely because mainstream media is using his preferred pronoun “she.”

As a matter of biological fact, Paige A. Thompson is a 33-year-old man from Seattle who posted on Twitter a selfie of himself wearing false eyelashes before gun-toting FBI agents raided his home.

Despite this, Thompson has been referred to as a “woman” and as “she” by numerous mainstream news sources, including The New York Times, CNN, CBS News, and Bloomberg.

Thompson, who is a former employee of Amazon, is a software developer with a penchant for living online. According to the legal complaint, Thompson, who sometimes used the online alias “erratic,” hacked into a computer owned by Capital One Financial Corporation, obtained the data of about 106 million customers or would-be customers, allegedly posted it on “GitHub”, a sharing service used by computer programmers, and later bragged about it on “Slack”, another sharing service.

“… Paige A. Thompson … has made statements on social media evidencing the fact that she [sic] has information of Capital One, and that she recognizes that she has acted illegally,” stated Special Agent Joel Martini of the FBI’s Cyber Squad.

On July 17, someone contacted Capital One to inform the company that their data was on GitHub and provided a computer address which contained Thompson’s name.  Martini’s investigation led him to connect Thompson’s online aliases with Thompson, who discussed his theft on various social media, including Twitter.

“I’ve basically strapped myself with a bomb vest …. Dropping Capitol [sic] One’s dox and admitting it,” Thompson wrote to the “reporting source”.

GitHub reached out to LifeSiteNews after this report was published, stating that the “file posted on GitHub in this incident did not contain any Social Security numbers, bank account information, or any other reportedly stolen personal information.”

“We received a request from Capital One to remove content containing information about the methods used to steal the data, which we took down promptly after receiving their request,” a spokesperson stated.

The New York Times reported earlier this week that Thompson discussed his “personal challenges” in online forums for months this year: “suicidal thoughts, struggles to find employment, and difficulties she [sic] had faced since transitioning to a woman years before.”

According to Thompson’s former friend Sarah Stensberg, Thompson’s life was indeed erratic, sometimes following a “promising career” as a software developer, and sometimes overturning his life, sometimes finding community online with other computer scientists, and sometimes alienating all his friends.

“It was just a lifelong thing for her [sic],” Stensberg said.

“When she gets in these phases of intensity, she does really stupid things. She’ll push everyone away. She’ll write threatening emails. She’ll post things online about the things she’s doing.”

Stensberg’s husband has known Thompson since he was a teenager; they both belonged to a computer programmers’ club. Thompson grew up in a broken home, and at one point moved out to live with another software developer, Stensberg reported.

Thompson dropped out of Bellevue Community College to do computer-related jobs, and when Stensberg met him in 2010, his disruptive behavior was quite obvious. She and her husband once took their friend to the hospital to get him into an “inpatient treatment center,” but later conflicts led them to file a protective order against him.

Another friend, Aeif Dunn, reported that Thompson talked about the difficulties of transitioning into a woman and how he thought the change had “made it difficult for [him] to associate with people professionally.”

Sadly, when Thompson blogged some years earlier about problems in exploring “reassignment surgery,” he said what he really wanted and needed was friends.

“I think really what I want and need is friends,” he wrote.

“I think my problems with acceptance come from the fact that I have so few friends to accept me when I could.”

Thompson seems to have depended on online communities for any semblance of companionship and recently informed his Twitter followers that he wanted to check into a mental hospital.

“After this is over I’m going to go check into the mental hospital for an indefinite amount of time,” he tweeted.

“I have a whole list of things that will ensure my involuntary confinement from the world. The kind that they can’t ignore or brush off onto the crisis clinic. I’m never coming back.”

In May, a former “transman” gave a lecture in Vancouver in which she blamed the internet, particularly social media, for encouraging vulnerable, unhappy children to undergo “transitioning” into the opposite sex.