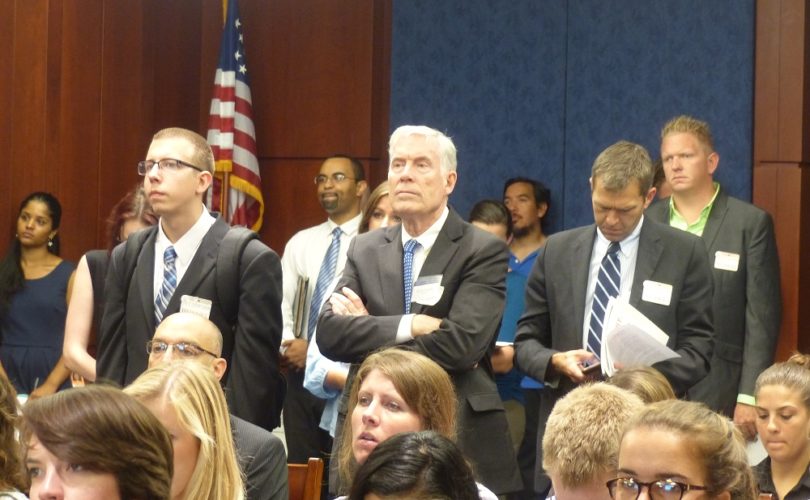 WASHINGTON, D.C., July 21, 2015 (LifeSiteNews) – It's time for Congress to crack down on the growing problem of pornography, a panel of experts told more than 100 activists, congressional interns, and media outlets Thursday.

Speaking at a two-hour event in the U.S. Capitol Visitor's Center, eight panelists – organized by the National Center on Sexual Exploitation (NCSE) – explained that a growing body of research shows that pornography has severe effects on the human mind and body.

“Pornography provides a slippery slope to take the next step to abuse and exploitation,” said Ed Smart, whose daughter Elizabeth was kidnapped for nine months in 2002. Smart is the vice president of the Elizabeth Smart Foundation.

The panel, which was sponsored by Senate Judiciary Chairman Chuck Grassley, R-IA, focused heavily on the link between watching pornography and the ill treatment of women. And according to University of Pennsylvania Director of the Sexual Trauma and Psychopathology Program Center for Cognitive Therapy Mary Anne Layden, Ph.D., “sexual obesity is causing catastrophic outcomes.”

Online pornography gives young people “sexual junk food,” according to Layden. “No wonder that the psychologists are calling pornography the new crack cocaine.”

In a statement to LifeSiteNews, Grassley said that “important steps have been made to protect children from pornographers and other forms of sexual exploitation, but more work remains, given the prevalence of, and easy access to, child pornography as well as obscenity.”

Attendees told LifeSiteNews that the event was so popular that dozens of people were turned away from attending, as the room had reached capacity.

“Obscenity laws prohibit the distribution of pornography on the Internet, on cable and satellite television, in hotels and motels, in retail shops. And these laws haven't been enforced vigorously. We would like to see these enforced.”

Ernie Allen, former president and CEO of the National Center for Missing & Exploited Children, told LifeSiteNews that “there are limits on speech based upon the effect that it has.” Citing Supreme Court precedent, Allen said that “the impact that unfettered, unlimited content like this is having on a whole generation is shouting 'fire' in a crowded theater.”

“We can't just sit back and wrap ourselves in the First Amendment and free speech and digital rights. There are appropriate limits that should be set.”

Panelist Cordelia Anderson, founder of the group Sensibilities Prevention Services, said that the economic and social power of the pornography industry can be overcome. Citing tobacco laws, she said that “it took lawsuits, it took policy changes, it took organizational practice changes, it took communities mobilizing” to “overcome that industry's inertia.”

At one time, “we couldn't even imagine” that smoking wouldn't take place in airplanes and restaurants, said Anderson.

Speaking to LifeSiteNews after the panel was over, Allen said he was concerned that “we have learned that parents, by and large, don't have a clue. They don't understand what kinds of exposure are being brought to their children.”

“We've tried really hard … over the last 15 years to educate parents about the need to use the kinds of tools and filters to protect themselves from this content,” said Allen, who noted that with modern technology, pornography can be accessed by children anytime, anywhere. However, “only 28 percent of [American] parents today are using those kinds of tools. And only 17 percent are using them on mobile devices, where their kids are accessing this stuff.”

Asked whether he was saying government should step in to take up slack from parents on preventing young people from seeing pornography, Allen said, “If you look at what's happening in the UK, government brought industry to the table” in order to work together to prevent what British Prime Minister “David Cameron called 'corroding childhood.'”

“There are a lot of critics [of Cameron's approach], that may not be the best solution here, but I think the answer falls in probably not in government mandates, but in mobilizing industry to recognize this problem and come up with solutions,” he said.