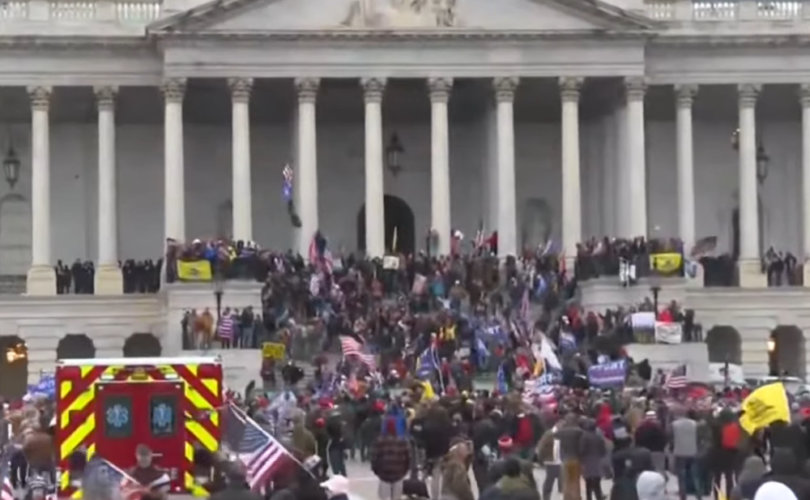 The articles of impeachment that Democratic members of congress brought against Trump last week assert that the president “willfully made statements that, in context, encouraged — and foreseeably resulted in — lawless action at the Capitol.”

Democrats specifically highlighted his statement that “if you don’t fight like hell you’re not going to have a country anymore.”

“Thus incited by President Trump,” they purported, “members of the crowd he had addressed, in an attempt to, among other objectives, interfere with the Joint Session’s solemn constitutional duty to certify the results of the 2020 Presidential election,” committed “seditious acts.”

In fact, in his speech at the Ellipse ahead of the Capitol riot, Trump told protestors “to peacefully and patriotically make your voices heard.” The broader context of his “fight like hell” comment was a call for “election security,” with no clear indication that the statement applied to Congress’s certification of the 2020 election.

Regardless, the first Capitol rioters most likely never heard those words, and they may not have heard any of President Trump’s remarks, based on the account of now-former Capitol Police chief Steven Sund.

According to an interview with Sund by Washington Post, the “first wave of protesters arrived at the Capitol about 12:40 p.m.”

The walk from the Ellipse to Capitol Hill is approximately thirty-five minutes without crowd delays, which would have been substantial, as tens of thousands of people had convened both to hear Trump and for the larger March to Save America. The rioters who began the attack must have missed Trump’s speech entirely.

Supporters who stayed for the president’s full remarks also were unlikely to have taken part in the first breaches of the Capitol building, according to the Washington Post and Chief Sund’s account.

“Just before 2 p.m., the pro-Trump mob entered the Capitol, sending lawmakers and staff scrambling for safety. D.C. police had quickly dispatched hundreds of officers to the scene,” the Post stated. Citing Sund, the newspaper reported the exact time as 1:59 pm.

Other timelines have put rioters’ initial entry into the Capitol building at 10 to 15 minutes later, after ongoing riots already had led to the breach of multiple barricades.

A video posted on Twitter shows protestors breaking down barricades and moving up the Capitol steps as early as 1:15 pm:

Whoa: Trump supporters going at it with the police on the steps of the Capitol as Congress counts the Electoral College ballots inside pic.twitter.com/LiQhaa5KkQ

At least one member of the mob that breached the Capitol was a far-left Black Lives Matter-linked agitator who appears to have trained other leftists on how to infiltrate the pro-Trump rally on January 6.

If the first groups of trespassers departed from the Ellipse as President Trump’s speech ended, they could have made it to the Capitol at around 1:45, at the earliest. Protestors undoubtedly would have arrived substantially later given the size of the crowds, however.

Despite the unprecedentedly rushed impeachment vote in the House last week, the allegation that Trump “incited” “members of the crowd” at his speech, who then committed sedition and insurrection, is not self-evident.

The Post stated that “at 1:09 p.m., Sund said he called Irving and Stenger, telling them it was time to call in the Guard. He wanted an emergency declaration. Both men said they would ‘run it up the chain’ and get back to him, he said.”

“Irving called back with formal approval at 2:10 p.m.,” by which time “plainclothes Capitol Police agents were barricading the door to the Speaker’s Lobby.” Irving had refused to declare an emergency before the march, due to “optics,” as Sund quoted him saying.

“Irving could not be reached for comment,” the Washington Post said. “A cellphone number listed in his name has not accepted messages since Wednesday. Messages left at a residence he owns in Nevada were not immediately returned, and there was no answer Sunday evening at a Watergate apartment listed in his name,” they added. “A neighbor said he had recently moved out.”