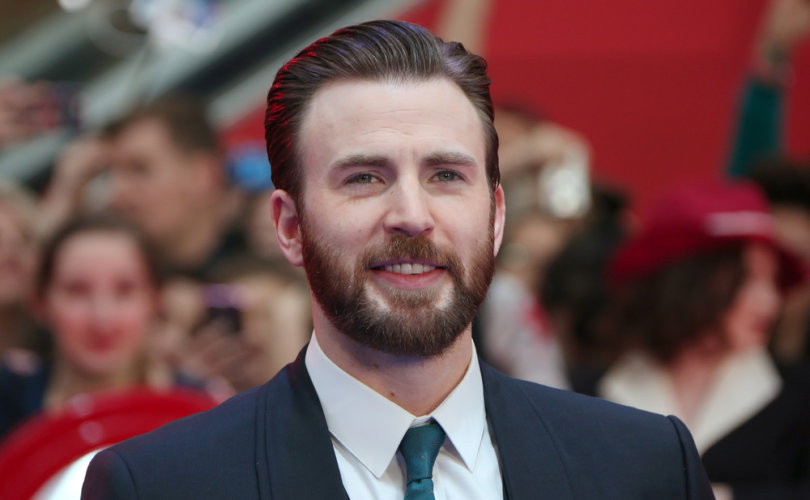 March 28, 2019, LifeSiteNews — The star of the mega-hit Captain America movies says he’s willing to alienate half his audience — and cut ties with New England Patriots quarterback Tom Brady — because he feels compelled to trash President Donald Trump, whom he considers to be a “dumb sh*t.”

Chris Evans, now synonymous with the Captain America character, revealed in an interview that he is wading into politics with the creation of a new website. The outspoken star of the soon-to-be-released movie, Avengers: Endgame, essentially admitted that he has no respect and no use for his fans who support President Trump.

“You don’t want to alienate half your audience,” Evans explained to the The Hollywood Reporter. “But I’d be disappointed in myself if I didn’t speak up. Especially for fear of some monetary repercussion or career damage — that just feels really gross to me.”

“63 million Americans voted for Trump,” noted Chet Cannon on Twitter. “Many of them have made you rich, and you write them off over a vote? You know nothing of their lives, struggles, & decency.”

“Their vote isn’t their life story,” continued Cannon. “Your inability to see people beyond politics, however, sums you up shamefully.”

.@ChrisEvans 63M Americans voted for Trump. Many of them have made you rich, and you write them off over a vote? You know nothing of their lives, struggles, & decency

Their vote isn’t their life story. Your inability to see people beyond politics, however, sums you up shamefully https://t.co/a5idJvY8ab

Evans’ controversial statements have the backing of Marvel Studios president Kevin Feige who, according to Evans, has told him, “Man, I love what you're doing (on Twitter).”

The Marvel head told The Hollywood Reporter that he doesn’t regard Evans’ public statements disparaging President Trump and his millions of supporters as “trash-talking.”

Asked if he would jump at the chance to play quarterback Tom Brady in a biopic,  Evans, who was raised in Massachusetts and is a Patriots fan, responded, “I don't know.”

“Two of New England's superheroes may not be able to coexist,” trumpeted MassLiveNews in a Tweet. “Chris Evans said he may need to ‘cut ties’ with Tom Brady over his support of President Trump.”

Two of New England's superheroes may not be able to coexist. Chris Evans said he may need to ‘cut ties’ with Tom Brady over his support of President Trump. https://t.co/v2GYv76xsV

“I really hope he's not a Trump supporter,” said Evans of Brady. “I'm just hoping he's one of those guys that maybe supported him and now regrets it. Maybe he thought it was going to be different — and even that bothers me — but maybe there's a chance now he just thinks Trump's an absolute dumb sh*t, which he is.”

“If he doesn't, if he's still on that Trump train, I might have to cut ties,” added Evans.  “It's really tough.”

“I think maybe a couple of years ago, I might have tried to pull some, like, mental gymnastics to compartmentalize,” regarding Brady’s support for President Trump, “but I don't know if I can anymore.”

Many Captain America fans might likewise have to pull some “mental gymnastics” and “compartmentalize” in order to watch Evans repeat his superhero role in Avengers: Endgame.