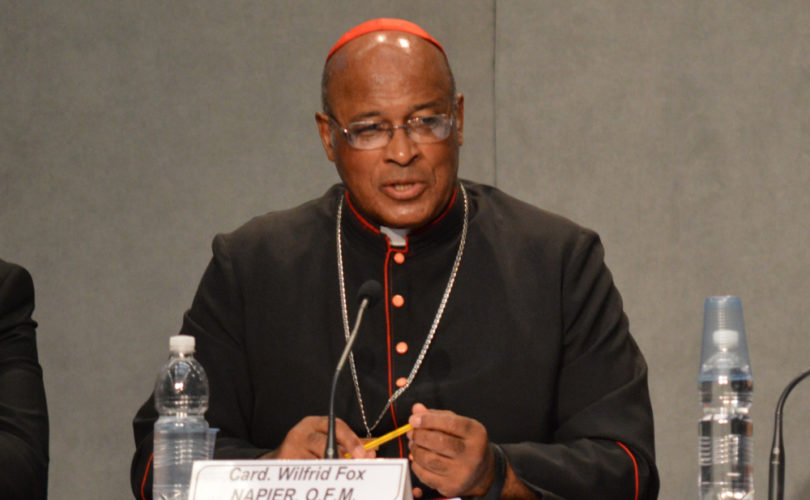 March 8, 2016 (CardinalNewmanSociety) — South African Cardinal Wilfrid Fox Napier, OFM, took to Twitter to criticize the administration of Georgetown University for inviting Planned Parenthood Federation of America (PPFA) President Cecile Richards to speak on campus this April, and said students and staff should take a firm stance in defense of life.

The Cardinal Newman Society broke the news on March 2 that the Lecture Fund at Georgetown invited Richards to campus. The Lecture Fund “is a non-partisan student-run organization that exists to enrich the academic experience of the Georgetown community. The Lecture Fund strives to bring speakers to Georgetown’s campus to enlighten, educate and, occasionally, entertain.” The next day, the University issued a statement defending its decision to allow Richards to speak on campus citing Georgetown’s commitment to “the free exchange of ideas.”

Responding on March 6 to a tweet from pro-life advocate Lila Rose, president of Live Action, Cardinal Napier said: “If there's a crisis in the Catholic Church today, it’s the disjuncture between the imperative to live and teach the Gospel and the obsession to be fair and broad minded on moral and critical life issues. Georgetown’s hosting Cecile Richards is an obvious case!”

Cardinal Napier also tweeted on the issue, “Those in authority at Georgetown seem committed to 'political correctness' rather than fidelity to the Church!” and, “I also don’t understand why Catholic Students and Staff don't give personal witness to the Faith by taking a firm stand for Life!”

The Newman Society pointed out in its original report that as the head of PPFA and the Planned Parenthood Action Fund, Richards promotes positions and activism on a daily basis that directly contradict Catholic Church teaching on the dignity of human life and on human sexuality. And according to PPFA’s records of “abortion services” disclosed in annual reports, Richards has overseen the deaths of over 2.8 million babies since taking charge of the organization in 2006.

“This is the latest in a long history of scandal at Georgetown University,” said Cardinal Newman Society President Patrick Reilly after first learning about the invitation to Richards. “Disguised as an academic event, this is nothing more than a platform for abortion advocacy at a Catholic university and under the nose of the Catholic bishops, featuring a wicked woman who defends the sale of baby body parts and is responsible for the deaths of millions of aborted children.”

Georgetown stated in its defense of hosting Richards:

As the nation’s oldest Catholic and Jesuit university, Georgetown University is proud to be a university that deeply values our faith tradition and that encourages the free exchange of ideas. We respect our students’ right to express their personal views and are committed to sustaining a forum for the free exchange of ideas, even when those ideas may be difficult, controversial or objectionable to some.

“They said the same thing when Larry Flynt and Barack Obama spoke at Georgetown,” Reilly told CNSNews.com in response to Georgetown’s statement. “Besides a clear bias in the choice of speakers, there’s no sense of moral truth, which is the central point of a Catholic university. Either you accept Catholic moral teaching as true or you do not. In the case of Georgetown, they simply do not.

“In bringing in someone with such a horrendous record of not only advocating ideas that would be contrary to Catholic teaching, but is herself responsible for the deaths of more than two million babies under her watch, Georgetown demonstrates that it does not understand the nature of a Catholic university,” Reilly added.