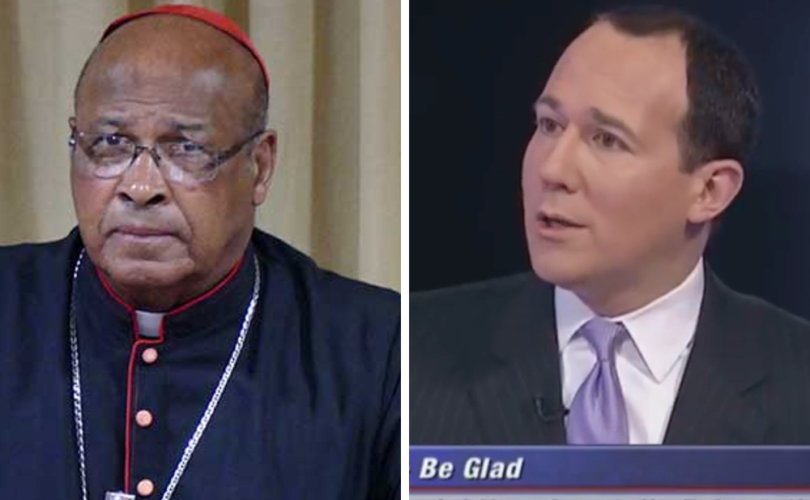 The former Archbishop of Durban tweeted last night that Arroyo was like a “throwback” to Northern Ireland’s most notorious anti-Catholic “Ian Paisley & his ilk.”

“The World Over” hosted by Raymond Aroyo is like a throwback to the 1960’s & 70’s, when Ian Paisley & his ilk fulminated against Catholic Faith in general, & Pope in particular! I’ve still to hear a programme that doesn’t report negatively on or attack Pope Francis!” tweeted Napier.

Should read:
“The World Over” hosted by Raymond Aroyo is like a throwback to the 1960’s & 70’s, when Ian Paisley & his ilk fulminated against Catholic Faith in general, & Pope in particular! I’ve still to hear a programme that doesn’t report negatively on or attack Pope Francis!

The Reverend Ian Paisley, Ulster politician and founder of the Free Presbyterian Church of Ireland, died in 2014. He was a key player in the Irish sectarian “Troubles”, which lasted from the late-1960s to the Good Friday Agreement in 2007. Paisley was infamous for his preaching against Roman Catholicism and peace-building with Northern Ireland’s Irish republican minority.

Catholics around the world have been tuning in to watch Arroyo along with “Papal Posse” members Robert Royal and Father Gerald Murray as they comment regularly on the Francis pontificate from the perspective of traditional Catholic teaching. Papal adviser Father Antonio Spadaro demanded earlier this year that a papal interdict be placed on Arroyo on account of the show.

Cardinal Napier, who has been a champion of Catholic doctrine concerning marriage and the family, has nevertheless been a staunch defender of Pope Francis’ refusal to answer cardinals’ questions, or Dubia, regarding Amoris Laetitia. In a long Twitter conversation with an unhappy Catholic, Napier suggested that Francis’ refusal to answer modeled on the silence of Jesus Christ before “certain questions”.

Arroyo defended himself today, tweeting that Mother Angelica, the foundress of the Eternal World Television Network (EWTN), had told him that he had an obligation to tell the truth, no matter how others responded:

“‘It’s your obligation to speak the truth, and everyone can either take it or leave it. But truth must be in us. We live in such a poverty of truth today.’ – Mother Angelica (to me many years ago.),” Arroyo wrote.

“It’s your obligation to speak the truth, and everyone can either take it or leave it. But truth must be in us. We live in such a poverty of truth today.”
– Mother Angelica (to me many years ago.) pic.twitter.com/XS9WOwSZkx

The reaction to Napier’s tweet was largely in defense of the EWTN host.

“Perhaps it would be more helpful and elevate the level of online discourse if you addressed specific points and criticisms raised in the program,” she tweeted. “This mode of ‘arguing’ by name-calling or guilt-by-association isn't authentic dialogue – which I thought was our goal – in any sense.”

English blogger Laurence England retorted that EWTN is doing its duty whereas the Cardinal is not.

“I am yet to go a week without Pope Francis wrecking Christ's Church without Cardinal Napier's support,” he tweeted. “EWTN are just doing their duty AS YOU DO NOT DO YOURS.”

In his tweet, Colombian priest Fr. Carlos Vargas referred to the reasons why EWTN has questioned some of Pope Francis’ decisions.

“When the Pope's words cause confusion in the Church, and when his actions denote a disregard for the sex abuse crisis in the US, you may call that ‘negative reporting,’” he wrote. “Others call it the truth.”

Other Catholics told the Cardinal that they did not think his tweet was worthy of his office.

It's highly inappropriate for a Prince of the Church to single out one Catholic by name on social media for this sort of criticism, even more so since the criticism is unfounded,” tweeted Steven Hunter, a married father in Ohio. “This pope has been a font of ambiguity and confusion, and I'm glad @RaymondArroyo is calling it out.”

“If something Raymond has reported is false then say so and be specific. But to characterize all criticism as “attack” is dishonest and reflects poorly on you, Your Eminence,” he added.