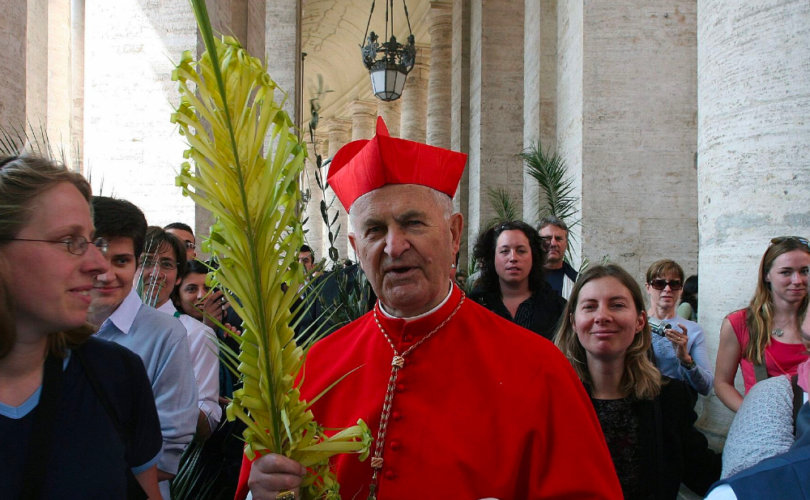 Cardinal Jozef Tomko on Palm Sunday at the VaticanTwitter screenshot

VATICAN CITY (LifeSiteNews) – On Thursday, Aug. 11, Cardinal Giovanni Battista Re, Dean of the College of Cardinals, celebrated the funeral Mass of Cardinal Jozef Tomko at the Altar of the Chair in St. Peter’s Basilica in Rome. The Holy Father, who was present in attendance, presided over the final Commendatio and Valedictio.

The late Slovakian cardinal died in Rome on Aug. 8. He was the Prefect emeritus of the Congregation for the Evangelization of Peoples and had been created a cardinal by John Paul II in 1985.

As Vatican News reported yesterday, in his funeral homily Cardinal Re praised Tomko’s lifetime work of dedication “to the creation of numerous new dioceses, the construction of new churches, education centers, social centers, and the development of the missionary cooperation of the Pontifical Mission Societies in many countries.”

The late cardinal was also praised by Cardinal Joseph Zen in his book, “For Love of My People I Will Not Remain Silent,” for his clarity and integrity in assisting the Church in China and in dealing with the Communist Chinese Party during his tenure in the Congregation for the Evangelization of Peoples.

Cardinal Tomko had been prepared for that work by his experience with the Communists in his own home country of Slovakia. He was ordained a priest in 1949 in Rome during the Communist oppression of the Catholic Church in Slovakia. Due to persecution of the Church, he was unable to return to the Archdiocese of Kosice, and in 1962 began to work at the Congregation for the Doctrine of the Faith in the Vatican, which he headed in 1966. In the Roman Curia he subsequently served as Undersecretary of the Congregation for Bishops in 1974, as Secretary General of the Synod of Bishops in 1979, and later as Prefect of the Congregation for the Evangelization of Peoples in 1985. In 1985 he was also elevated to the College of Cardinals.

With his long experience in the Roman Curia, in 2012 Cardinal Tomko, along with Cardinals Julian Herranz and Salvatore De Giorgi, was notably tasked by Pope Benedict XVI with an investigation into the Curial corruption surrounding the “Vatileaks” scandal of 2011, in which confidential Papal documents had been stolen and leaked to the press.

According to a 2013 report of the Italian news agency La Repubblica, as a result of the investigation the cardinals drew up a document they presented to Pope Benedict on December 17, 2012, in which they detailed the findings of an active homosexual lobby network within the Vatican that, in addition to sexual corruption, also vied for money and power.

As LifeSiteNews reported at the time, La Repubblica, while keeping its sources anonymous, said that the investigation document,

“cites not only an active homosexual subculture in the Vatican, but factional ‘struggles for power and money’. The paper quotes ‘a man very close’ to the document’s authors, who described its contents, saying, ‘Everything revolves around the non-observance of the sixth and seventh commandment,’ the Biblical prohibitions against sexual impurity and theft.”

The document was reported to have “revealed ‘a lobby network’ identified with the various religious congregations – including the Salesians of Don Bosco and Jesuits – and ‘geographical origin,’ described as ‘a network united according to sexual orientation.’”

According to the testimony of Archbishop Carlo Maria Viganò, who contributed to the investigation conducted by the three cardinals, the dossier on the Curial corruption was handed on to Pope Francis by Pope Benedict in person, at Castel Gandolfo. However, it has yet to be made public.

In a 2019 interview with Italian journalist Aldo Maria Valli, Viganò lamented the long silence surrounding the investigation and the corruption it had uncovered. “Whatever happened,” he asked, “to the investigation ordered by Benedict XVI and conducted by the three cardinals? No one has said anything about this. If one wanted to clean up the corruption, addressing the findings of this report would be a good place to start. We all saw a box of documents handed over by one Pope to another at Castel Gandolfo, and now it’s disappeared.”

Again in 2021, Viganò denounced the silence as a continuing cover-up for the lavender mafia within the Vatican. “Benedict XVI,” Viganò said in an interview with Radio Spada,

“in the months preceding his decision to assume the singular title of ‘pope emeritus’, instituted a Commission of Cardinals, chaired by Cardinal Herranz, and composed of Cardinals Tomko and De Giorgi, with the task of carrying out a thorough investigation into the confidential information disseminated in the ‘Vatileaks’ affair. That mass of information, together with the other evidence collected by the three Cardinals, would have allowed a cleansing operation: everything has been covered up!”

The Vatican has yet to release the report on the corruption in the Roman Curia documented in the investigation conducted by the late Cardinal Tomko.