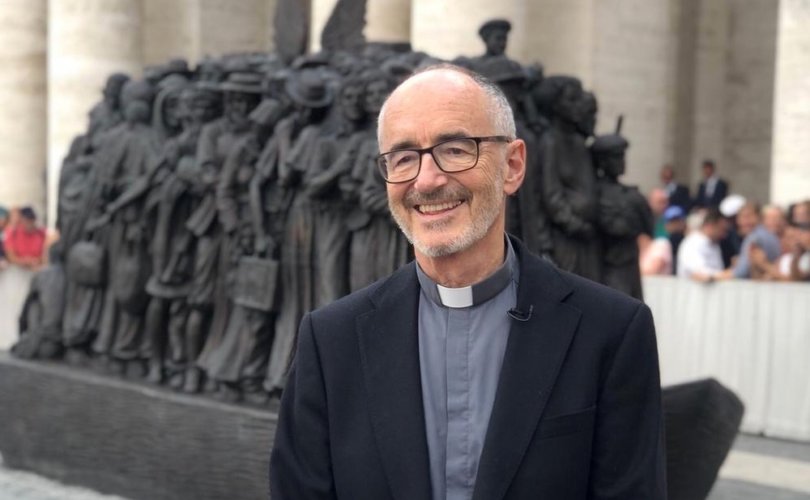 ROME, February 12, 2020 (LifeSiteNews) – Asked if the Pope’s new exhortation on the Amazon Synod closed the door on women deacons and married priests, a Cardinal at the Vatican press conference presenting the exhortation said that “the Holy Father has not resolved” the questions and that “they will continue to be debated, discussed, discerned, prayed over, and when mature presented to the appropriate authority for decisions.”

Cardinal Michael Czerny, SJ, appointed by Pope Francis as the Special Secretary of the Synod for the Amazon, added that those decisions “can be made in a diocese, in a conference, and decisions that are made here (at the Vatican).”

The exhortation itself does not explicitly accept a married priesthood and seems to dismiss the idea of a female diaconate, but there are still many questions, and this was apparent at the press conference.

One of the key points in relation to this, is that right in the introduction of the exhortation, Pope Francis says he is “officially present[ing] the Final Document” of the Synod, which had approved the idea of ordaining married men to the priesthood and of establishing some new forms of ministry for women.

Adding to the confusion, in particular, is that in 2018, Pope Francis issued an apostolic constitution that stipulated the final document of a Synod of Bishops would become part of the papal magisterium should the Pope approve it. Titled Episcopalis Communio, it reads:

If it is expressly approved by the Roman Pontiff, the Final Document participates in the ordinary Magisterium of the Successor of Peter.

At the Vatican’s press conference, however, Czerny and others denied that the final document has magisterial authority.

Nevertheless Czerny insisted the questions are still open for discussion.

After the Vatican press conference today, LifeSite’s Rome correspondent Diane Montagna interviewed Cardinal Czerny about the question of the women’s diaconate, first briefly while he was still seated on the panel, and then in the Holy See Press Office where he was giving interviews. We present below their full exchanges.

LifeSite: Cardinal Czerny, the Sacrament of Holy Orders is one sacrament. The diaconate is a part, an essential part, of that sacrament. Can we not rule out that a woman cannot be admitted to Holy Orders?

It’s not under study if a woman can be admitted to Holy Orders.

The women’s diaconate is under study.

But not in the sense of the Sacrament of Holy Orders.

We’ll have to see what the study produces.

Cardinal Czerny: I really don’t know what you mean, “to rule out.” I have presented the final document of the Synod. You know what it has said about the diaconate. I’ve presented the [Apostolic] Exhortation. The Exhortation officially presents the final document, so that’s there to read. And we know that the Commission on the diaconate will be meeting again, and we’ll have to wait to see.

Yes, but even the Holy Father has said to the International Union of Women Superiors General that even if in the beginning of the Church there existed an order of deaconesses, and he’s talked about how they’ve participated in the baptisms in very appropriate ways. That’s a completely different thing than admitting a woman to the Sacrament of Holy Orders, as many are pushing for in the Church — whether it’s the Germans or in the United States. So according to this document that we received today, is it excluding women from Holy Orders?

No. This document doesn’t go further with regard to this question than the final document of the synod. And as I said already, the Holy Father will be recalling the Commission on the diaconate, and we’ll have to see what its results are.