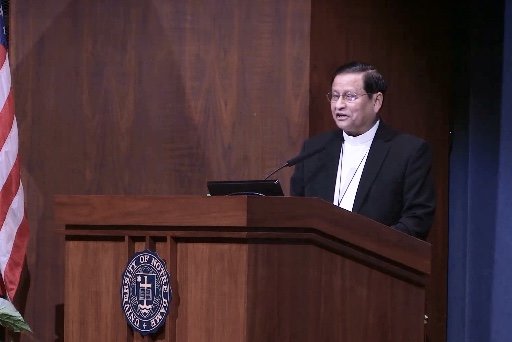 YANGON, Myanmar, April 2, 2020 (LifeSiteNews) — A Myanmar Catholic cardinal has accused the Chinese Communist Party of being “morally culpable” for the coronavirus pandemic that has “destroyed lives all over the world,” with the “Chinese people the first victims.”

Cardinal Charles Maung Bo, the Archbishop of Yangon, condemned China’s leader, Xi Jingping, and the Chinese Communist Party (CCP) in an April 2 statement that Asia News reported as the first time “an ecclesial personality has lashed out against the Chinese regime” and held it responsible for the coronavirus pandemic — which originated in the city of Wuhan in the Hubei province.

“Through its inhumane and irresponsible handling of the coronavirus, the CCP has proven what many previously thought: that it is a threat to the world,” Bo said in his statement (here).

Xi’s regime “is responsible, through its criminal negligence and repression, for the pandemic sweeping through our streets today.”

Bo accused Beijing of silencing doctors and journalists who warned about the virus in December, and of not acting to isolate Wuhan and Hubei until January 23.

He cited a University of Southampton study that found had “China acted responsibly just one, two or three weeks more quickly, the number affected by virus would have been cut by 66 percent, 86 percent and 95 percent, respectively. Its failure has unleashed a global contagion killing thousands.”

And “once the truth was out,” Beijing rejected offers of help, ignored the U.S. Center for Disease Control and Prevention and initially “sidelined” the World Health Organization, “although it collaborates closely with the Chinese regime,” the cardinal noted.

There is also “deep concern” that the “Chinese regime’s official statistics significantly downplay the scale of infection within China. At the same time, the CCP has now accused the United States Army of causing the pandemic,” Bo said.

“Lies and propaganda have put millions of lives around the world in danger.”

Myanmar, where Catholics are about one percent of the population, is particularly hard hit and “extremely vulnerable,” Bo said.

“Bordering China, where COVID-19 first began, we are a poor nation, without the health and social care resources that more developed nations have,” he noted.

“Hundreds of thousands of people in Myanmar are displaced by conflict, living in camps in the country or on our borders without adequate sanitation, medicines or care,” he said.

“In such overcrowded camps, the ‘social distancing’ measures implemented by many countries are impossible to apply. The healthcare systems in the most advanced countries in the world are overwhelmed, so imagine the dangers in a poor and conflict-ridden country like Myanmar.”

He also pointed out that the Chinese people are suffering indescribably under Xi’s regime, repeatedly making the distinction between the government and the people, and emphasizing that “no one should respond to this crisis with racial hatred toward the Chinese.”

“Indeed, the Chinese people were the first victims of this virus and have long been the primary victims of their repressive regime. They deserve our sympathy, our solidarity and our support. But it is the repression, the lies and the corruption of the CCP that are responsible,” he wrote.

Particular victims of Xi’s “despotic” rule are the “whistleblowers” who raised alarm about the virus in late 2019.

“Dr. Li Wenliang in Wuhan Central Hospital who issued a warning to fellow medics on 30 December – were ordered by the police to ‘stop making false comments,’” the cardinal wrote.

“Li, a 34 year-old ophthalmologist, was told he would be investigated for ‘spreading rumors’ and was forced by the police to sign a confession. He later died after contracting coronavirus.”

And “journalists who tried to report on the virus then disappeared,” he said.

“Li Zehua, Chen Qiushi and Fang Bin are among those believed to have been arrested simply for telling the truth. Legal scholar Xu Zhiong has also been detained after publishing an open letter criticizing the Chinese regime’s response,” Bo said.

“The CCP’s conduct is symptomatic of its increasingly repressive nature. In recent years, we have seen an intense crackdown on freedom of expression in China. Lawyers, bloggers, dissidents and civil society activists have been rounded up and have disappeared,” he noted.

“In particular, the regime has launched a campaign against religion, resulting in the destruction of thousands of churches and crosses and the incarceration of at least one million Uyghur Muslims in concentration camps,” he said.

“The Chinese regime led by the all powerful XI and the Chinese Communist Party (CCP) – not its people – owes us all an apology, and compensation for the destruction it has caused,” Bo said.

He cited law professor James Kraska, who says China is legally responsible for COVID 19 and “claims could be made in trillions.”

Bo also referenced Pope Francis’ “beautiful” Ubi et Orbi homily on March 27, in which the pontiff stood facing an empty St. Peter’s Square and “reminded us that the coronavirus pandemic has united our common humanity.”

The cardinal’s accusations against Xi’s regime are echoed by many, as evidence mounts against Beijing.

Bloomberg reported this week that a U.S. intelligence report revealed Beijing “intentionally” underreported the number of coronavirus deaths in the country, and China expert Steve Mosher recently wrote that many are coming to believe the China coronavirus may have been under study at a Wuhan biolab and somehow escaped.