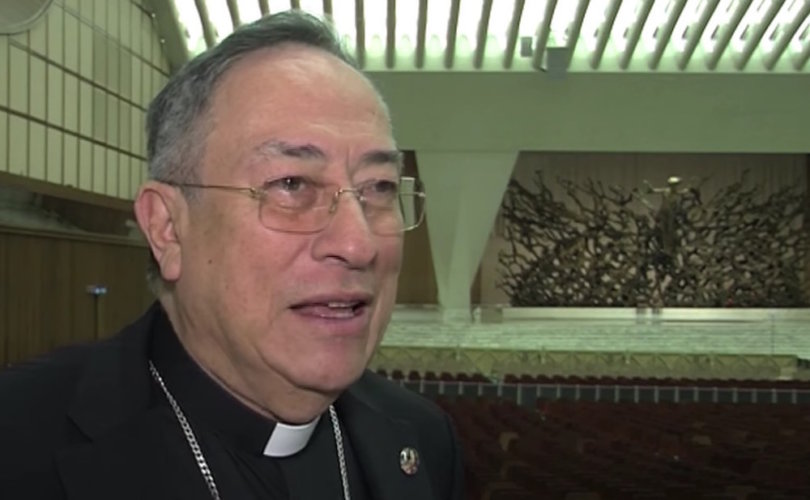 ROME, May 19, 2017 (LifeSiteNews) – The head of Pope Francis’ powerful group of nine Cardinals entrusted with his Vatican reforms has issued another attack on Cardinal Raymond Burke.

Burke “is a disappointed man, in that he wanted power and lost it. He thought he was the maximum authority in the United States,” claims Maradiaga.

“He’s not the magisterium . . . The Holy Father is the magisterium, and he’s the one who teaches the whole Church. This other [person] speaks only his own thoughts, which don’t merit further comment.”

“They are the words of a poor man.”

Maradiaga then made his attacks more general: “These currents of the Catholic right are persons who seek power and not the truth, and the truth is one . . . If they claim to find some ‘heresy’ in the words of Francis, they’re making a big mistake, because they’re thinking only like men and not as the Lord wants.”

“What sense does it have to publish writings against the pope, which don’t damage him but ordinary people? What does a right-wing closed on certain points accomplish? Nothing!”

“Ordinary people are with the pope, this is completely clear.  I see that everywhere.”

“Those who are proud, arrogant, who believe they have a superior intellect … poor people! Pride is also a form of poverty.”

Maradiaga’s claims about Burke are “the opposite of the truth,” according to Fr. John Zuhlsdorf, writing on his blog.

Fr. Zuhlsdorf quoted Our Lady’s message at Akita, Japan, where she prophesied that “the work of the devil will infiltrate even into the Church in such a way that one will see cardinals opposing cardinals, bishops against bishops.”

“Today we have an example of a cardinal against a cardinal,” the priest wrote. “While we grant that cardinals have always been against cardinals, today’s conflicts are particularly disturbing.  The stakes are very high, the points of dispute are serious, and the role of social media amplify the confusion.”

Fr. Zuhlsdorf concludes, “The judgement of Card. Burke which Card. Rodriguez has somewhat rashly asserted is, quite simply, the opposite of the truth.  I don’t doubt, however, that he sincerely believes what he said about his brother in the College.”

Pope Francis removed Cardinal Burke as head of the Vatican’s supreme court in 2014.  Burke has long been a leading conservative voice in the Church who, among other things, has publicly questioned the Pope’s efforts to allow Catholics who divorce and civilly remarry to receive communion.

After the publication of Amoris Laetita, Burke and three other cardinals submitted a ste of dubia to Pope Francis, seeking clarification on five specific points of confusion raised by the document.  Eight months later, the pontiff has yet to respond.

In the months since submitting the dubia, other cardinals and bishops have expressed their support for the effort to gain clarification from the Holy See.

Still, Maradiaga insists, “I think that one of the qualities we cardinals [should have] is loyalty.  Even if we don’t all think the same way, we still have to be loyal to Peter,” and whoever doesn’t offer that loyalty, “is just seeking attention.”

“The greatest problem . . . is the disorientation that’s created among people when they read affirmations of bishops and cardinals against the Holy Father.”

In a radio interview in March, Maradiaga said of the cardinals who authored the dubia, “I know the four and I say that they are already in retirement . . . They should do something else.”  He continued, “I would not want to put it – shall we say – too strongly; only God knows people’s consciences and inner motivations; but, from the outside it seems to me to be a new pharisaism.”

Last year, documents released by Wikileaks showed George Soros' Open Society Foundation hoped to work through Maradiaga to influence American Catholic bishops during the Pope's visit to the U.S.  The foundation paid $650,000 to influence Pope Francis’ September 2015 visit to the USA with a view to “shift[ing] national paradigms and priorities in the run-up to the 2016 presidential campaign.”

In 2015, Maradiaga participated in the “shadow synod” that attacked Church teaching and contributed to the subversion of the two synods on the family.