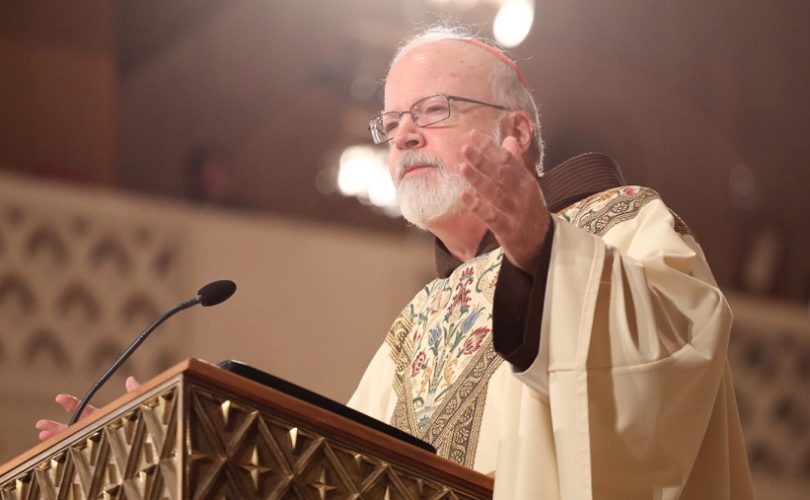 In a statement posted Friday on the Archdiocese of Boston's website – and later on the Cardinal's own blog – Cardinal O'Malley said “the Massachusetts legislature acted with unseemly haste to establish what amounts to a new buffer zone of 25 feet.”

“The effect again is to make it very difficult for citizens seeking to offer alternatives to women contemplating an abortion,” he wrote.

The new regulations, signed into law by Democratic Governor Deval Patrick last Thursday, replace a 2007 law that barred anyone uttering pro-life speech from 35 feet of any abortion facility's entrance. The Supreme Court unanimously struck down the law earlier this summer.

“The Supreme Court seldom is unanimous in our day,” the cardinal noted on his blog.

The new law allows police to break up any “crowd” that is allegedly impeding access to the facility's entrance or harassing women entering the facility – even if the crowd is composed of as few as two people.

Anyone police determine to have impaired a woman's entrance to the facility can be forced into the equivalent of a penalty box, standing at least 25 feet away from the entrance for eight hours, or until the facility closes.

Those who violate the law could face a $1,000 fine and six months in jail for the first offense, and up to $25,000 in fines and five years in prison for a repeat offense.

Michael DePrimo of the Alliance Defending Freedom (ADF), who defended counselor Eleanor McCullen in her Supreme Court victory, called the new law a “backdoor attempt to interfere with the constitutional right of free speech” that “invites state censorship.”

“The first amendment protection of free speech cannot be placed behind painted lines,” he said.

The state's abortion industry claimed the law was necessary to prevent pro-life terrorism or vandalism. Megan Amundson, executive director of NARAL Pro-Choice Massachusetts, told the Boston Herald that there was “compelling evidence that there is violence and intimidation at clinics.” Planned Parenthood League of Massachusetts CEO Martha “Marty” Walz, who drafted the 2007 law overturned by McCullen v. Coakley, echoed her claims.

But Catholic Action League Executive Director C. J. Doyle dismissed their allegations, saying, “despite Walz's charges, no arrests have been made, and no credible evidence has been presented to substantiate her claims.”

O'Malley, the chair of the U.S. Council of Catholic Bishops' Committee on Pro-Life Activities, held out “hope that the judiciary will once again correct what I regard as an unjust limitation on free speech in Massachusetts about a fundamental moral and human issue.”

DePrimo promised that he and the ADF would watch the implementation of the new law to assure it did not restrict the actions of peaceful sidewalk counselors, who offer emotional, medical, and often financial support to abortion-minded women.

He vowed the state's counselors would remain free to offer compassion and assistance to women who are “looking for the hope, help, love, and concrete aid offered by Eleanor McCullen and other peaceful sidewalk counselors.”

After both branches of the legislature sent the bill to the Governor who signed it into law, the effect again is to make it very difficult for citizens seeking to offer alternatives to women contemplating an abortion.

The civil law must balance the rights and duties of all individuals and we must be vigilant to ensure the safety of all people, regardless of their position on this most serious issue.

I recognize the struggle for all involved, but I believe preventing any reasonable possibility for dialogue is a misguided use of civil law. The Supreme Court seldom is unanimous in our day; the fact that it was on this question gives me hope that the judiciary will once again correct what I regard as an unjust limitation on free speech in Massachusetts about a fundamental moral and human issue.