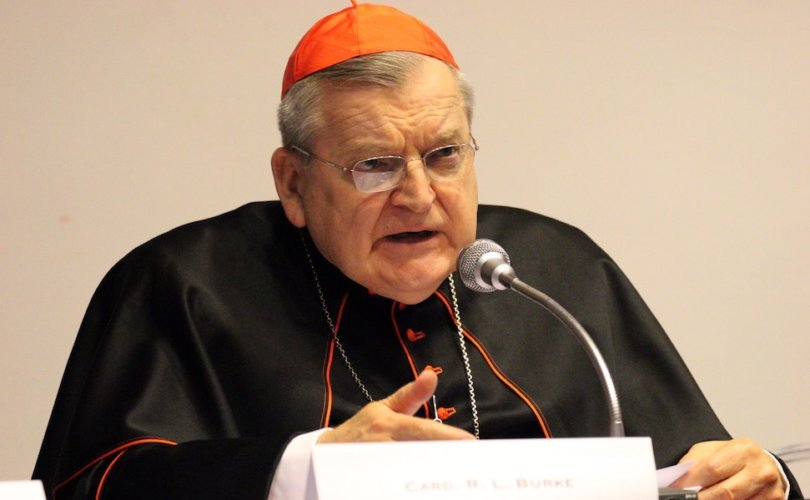 October 1, 2019 (LifeSiteNews) – Cardinal Raymond Burke has spoken out against the misuse of the Amazon synodal process, blasting its recent exploitation to change both the doctrine and disciplines of the Catholic Church. The synod is set to take place in Rome this month from the 6-27.

“The fundamental concept of a synod was to call together representatives of the clergy and the lay people to see how the Church could more effectively teach and more effectively apply her discipline,” Burke told Sohrab Ahmari in an interview published Sept. 27 in First Things.

“It was all meant to be a way of furthering the mission of the Church,” he continued.

Burke cited the Code of Canon Law when he explained that a synod is supposed to advise the pope “in the preservation and growth of faith and morals, and the observance and strengthening of ecclesiastical discipline.”

“There’s nothing there about altering the doctrine or the discipline,” he added.

The Cardinal then described the Instrumentum Laboris, or working document, for this month’s Synod on the Amazon as an attack on Christ Himself.

“The working document of the Pan-Amazonian synod is a direct attack on the Lordship of Christ,” Burke said.

“It says to people, ‘You already have the answers, and Christ is just one among many sources of answers.’ This is apostasy,” he continued.

Burke stressed that inculturation does not mean alteration of the truth of Christ.

“Christ is Lord, and in every time and place—this is the genius of the Church,” he said.

“When missionaries have preached Christ, they have also recognized the gifts and talents of the people to whom they were preaching,” he continued.

“The people then expressed in their own art and architecture the truths of the Church. They added their own flavor to the expression of the underlying Truth.”

The American Cardinal also addressed the synod that the German Bishops are organizing for themselves despite the disapproval of the Holy See. Burke told Ahmari that their “synodal path” is not valid.

“This has been made very clear,” Burke said.

“In the letter to German bishops, Cardinal Marc Ouellet of the Congregation for Bishops [told them] that they are undertaking a process that is basically outside the Church—in other words, attempting to create a church according to their own image and likeness,” he explained.

The Cardinal believes that this German innovation must be stopped before “greater harm” is done to Catholics.

“We’re talking about the salvation of souls, which means we need to take whatever measure is necessary,” he stressed.

Burke said the German bishops believe that they can change doctrine to suit their nation, but that they are wrong.

“The German bishops believe that they can now define doctrine, which is false,” he told Ahmari.

“Otherwise, we would end up with a whole group of national churches, each with their own preferences regarding doctrine and discipline.”

The Cardinal said that the very catholicity of the Catholic Church is at risk.

“The Catholic Church is a church that has one faith, one sacramental system, and one discipline throughout the whole world, and therefore we’ve never thought that each part of the world would define the Church according to particular cultures,” he said.

“That’s what’s being suggested in this working document of the Amazon and in Germany.”

For Burke, the Rhine flows not only into the Tiber but into the Amazon: the cardinal believes that the German bishops’ “binding synodal path” is “very much connected” to the Synod on the Amazon.

“A number of the great proponents of the thrust of the Amazon Synod working document are German bishops and priests,” the Cardinal informed Ahmari.

“And certain bishops in Germany have taken an unusual interest in this Amazon synod,” he continued.

“For instance, Bishop Franz-Josef Overbeck of Essen has said that ‘nothing will be the same’ after the Amazonian Synod process, the Church will be so completely changed, in his view.”

Burke indicated that Germans and other contributors to the Instrumentum Laboris believe that a national or ethnic culture is more important than the Gospel message itself.

“They say that the Amazon region is a fount of divine revelation, and therefore when the Church goes there in her missionary capacity, she should learn from the culture,” he said.

“This denies the fact that the Church brings the message of Christ, who alone is our salvation, and addresses that message to the culture—not the other way around!” he continued.

“So yes, there will be objectively good elements in the culture, inasmuch as conscience and nature point to revelation; there are things in the culture that will respond immediately to the Church’s teaching. But there will be other elements that must be purified and elevated. Why? Because Christ alone is our salvation. We don’t save ourselves, either individually or as a society.”

Regarding the purported priest shortage in the Amazon region, Burke said that a Brazilian prelate, a bishop in the Amazon for over a decade, had told him that there are, in fact, a “good number of vocations” in the region.

In addition, the people of the district understand and respect priestly celibacy. The Brazilian archbishop told Burke: “If you teach them about the celibacy of Christ himself and therefore the fittingness that his priests should also be celibate, they can certainly understand that.”

Burke added: “Amazonians are human beings like you and me, and they can order their lives with the help of God’s grace.”

The Instrumentum Laboris for the Synod on the Amazon has attracted severe criticism since it appeared on June 17. The 64-page document, which will form the basis of discussion at the upcoming Synod, suggests that local bishops’ conferences “adapt the Eucharistic rite to their cultures,” that the Church consider ordaining married “elders” to the priesthood, and that Synod fathers identify the “official ministry that can be conferred on women,” given their prominent role in Amazonian culture.

Critics also say the document promotes pantheism―worship of creation. They object to its declarations that non-Christian aboriginal people have already received revelation, that the priesthood needs to conform to the customs of the Amazon region, and that the world needs a new approach to what it means to be human.

Cardinal Walter Brandmüller issued a strong critique of the guidelines ten days after they appeared.

“It is to be stated now with insistence that the Instrumentum Laboris contradicts the binding teaching of the Church in decisive points and thus has to be qualified as heretical,” the 90-year-old German prelate wrote.

“Inasmuch as even the fact of Divine Revelation is here being questioned, or misunderstood, one also now has to speak, additionally, of apostasy.”