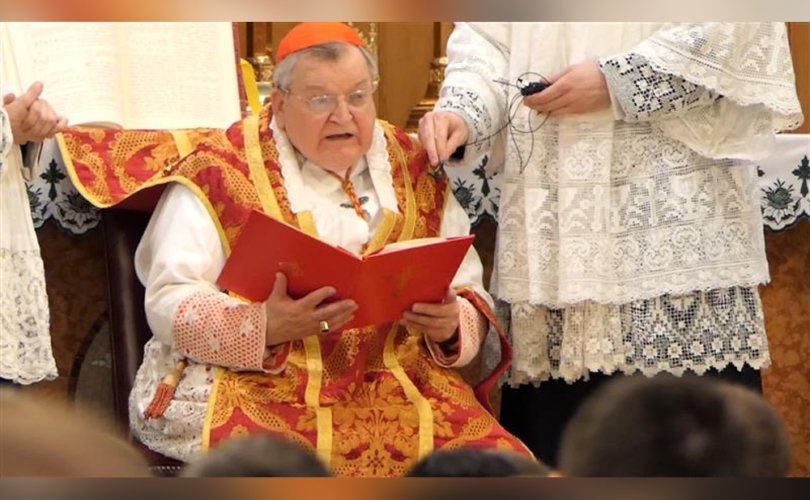 WASHINGTON, D.C., January 24, 2020 (LifeSiteNews) ― Cardinal Raymond Burke told Catholics attending Mass before the March for Life never to give up the fight for life.

Cardinal Burke made his remarks in a short but stirring homily during the Traditional Latin Mass he celebrated this morning at Holy Comforter-Saint Cyprian Roman Catholic Church.

“Sometimes we can grow weary in the battle for the restoration of respect for human life,” Burke observed.

“Sometimes we are tempted to say that our pro-life efforts are useless,” he continued.

“It is then that we should recall the words St. Paul wrote to St. Timothy: ‘But as for you, man of God, shun all this; aim at righteousness, godliness, faith, love, steadfastness, gentleness. Fight the good fight of the faith; take hold of the eternal life to which you were called when you made the good confession in the presence of many witnesses. I charge you to keep the commandment unstained and free from reproach until the appearing of our Lord Jesus Christ.’ [1 Timothy 6:11-12, 14].”

The cardinal added, “We must never give way to discouragement. Our only concern should be to remain faithful soldiers of Christ, and with Christ, in advancing the Gospel of Life.”

In the homily Burke noted that today is the Feast of Saint Timothy. He recalled that the saint had faced many challenges as a bishop, remaining “faithful, finally embracing a martyr’s death in order to be true to Our Lord and to the flock the Lord had entrusted to his pastoral care.”

The cardinal prefaced these remarks with several intercessions. He prayed for “those who are under the threat of abortion” and those who are the “agents of procured abortion … especially that they, once they have understood the most grave evil of their deeds, also may understand even more the immeasurable mercy and love of God for them in Jesus Christ, inviting them to repent of their sins and make reparation by a life dedicated to the restoration of the respect for the inviolable dignity for every human life without boundary or exception.”

Burke prayed also that “the legal protections for the right to life will be restored to all, and in a most special way for the innocent and defenseless unborn.” He asked also that “the laws of our nation may once again have their formation in the natural and moral law written by God on every human heart, a natural law which, by its first precept, teaches us to safeguard and promote all life.”

The cardinal mentioned in particular the “unjust provision” of the Supreme Court decision of January 22, 1973, which he prayed would be repealed. He asked in particular the intercession of the Blessed Virgin Mary under her title Our Lady of Guadalupe, patroness of the Americas.

At the conclusion of his homily, the cardinal reminded his congregation that they must carry the cross daily in order to be Jesus’ “true disciples.”

“We put nothing before the love of Christ,” Burke added, recalling the words of the Lord: “So therefore, whoever of you does not renounce all that he has cannot be my disciple” [Luke 14:33].

The Mass was organized by the Institute of Christ the King, on behalf of its young adult initiative “Sursum Corda,” and hosted at the parish of popular blogger Msgr. Charles Pope.

Tomorrow, Cardinal Burke will deliver the invocation at the National Pro-Life Summit (formerly the Students for Life of America conference).

Anthony Murdoch contributed to this report.

Correction: The article has been update to indicate that the Mass was organized by the Institute of Christ the King.