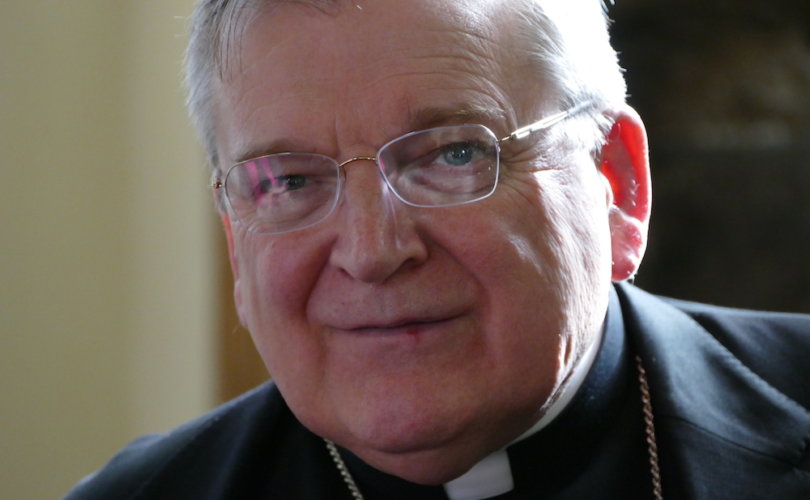 LifeSite shares the full authorized text of Cardinal Burke’s talk on the 100th anniversary of Fatima's Miracle of the Sun.

BUCKFAST ABBEY, England (LifeSiteNews) — Cardinal Raymond Burke has summoned the faithful to become “agents” of the Triumph of the Immaculate Heart of Mary in order to combat the “diabolical forces” that have been “unleashed upon the world” and are “entering into the very life of the Church.”

Speaking at the 2017 Fatima Centennial Summit held at Buckfast Abbey, on October 12-13, exactly one century after the Miracle of the Sun, Cardinal Burke said these diabolical forces are working to draw souls away from the faith into a widespread apostasy. Such forces have entered even into the ranks of the priesthood, he said, leading some pastors to offer “poisonous fruits” to “the very souls for whom they have been consecrated to care spiritually.”

“How easily today the unthinking member of the faithful can be deceived and beguiled by appearances, attractive gestures and flashy slogans, under which the substance is poison for his soul,” the cardinal said.

In his talk, Cardinal Burke explained the concrete nature of apostasy, distinguished it from heresy, and discussed the corruption within the Church caused by the embrace of a worldly culture lacking a foundation in sound philosophy and theology. He also traced the historical progression of this widespread apostasy from the early 20th century until today, as described by Pope Pius X to John Paul II and Benedict XVI.

In the Message of Fatima, the Blessed Virgin Mary indicates the “spiritual remedy” for “the deplorable situation in which the world and the Church find themselves,” the cardinal said. It is the way of prayer, penance, and reparation, including the Communion of Reparation of the First Saturdays.

Cardinal Burke called the faithful to make their own the prayer which the Angel taught the children at Fatima: “My God, I believe, I adore, I hope [in] and I love You. I ask pardon of You for those who do not believe, do not adore, do not hope [in] and do not love You.”

He also encouraged the faithful to follow the counsel of the Angel to “make of everything you can a sacrifice, and offer it to God as an action of reparation for the sins by which He is offended, and in supplication for the conversion of sinners.” And he invited them to “embrace whatever suffering comes from our faithful witness to Him Who is the true treasure of our hearts.”

While we should be “realistic” about “the great evils which beset the world and the Church,” Cardinal Burke said, we should also be “full of hope in the victory of the Sacred Heart of Jesus through the Immaculate Heart of Mary, for which we battle each day with the incomparable spiritual armaments of prayer and penance, and of reparation for sins committed.”

“We have the assurance of Our Lady that her Immaculate Heart will triumph, that the truth and love of her Divine Son will triumph,” the cardinal said. “We are called to be agents of her triumph by our obedience to her maternal counsel.”

We are grateful to His Eminence for sharing with LifeSiteNews the text of the address which he delivered on October 12 at the conference, which was entitled: “Fatima 100 Years Later: A Marian Call for the Whole Church.”