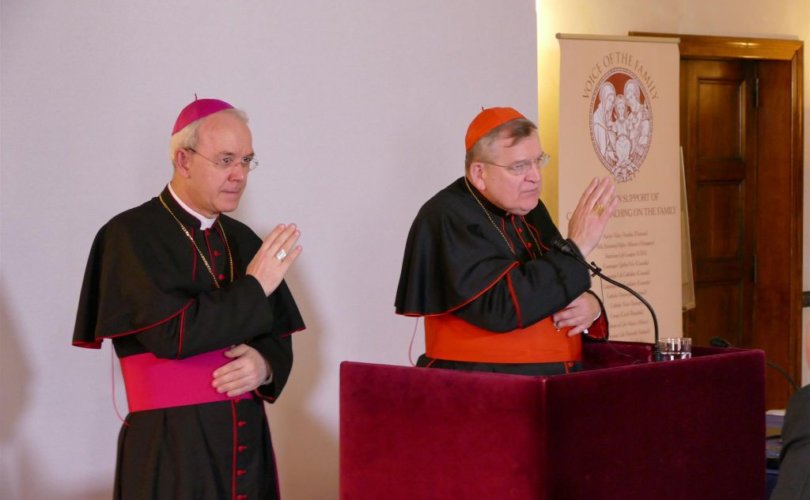 ROME, June 27, 2018 (LifeSiteNews) — The reception of Holy Communion in the Catholic Church — even in exceptional cases — by a Protestant or other non-Catholic constitutes a “lie” that betrays the Apostolic tradition and the Church’s constant practice for over two thousand years.

According to Bishop Athanasius Schneider, auxiliary of Astana, Kazakhstan, the reception of Holy Communion by a non-Catholic would be a falsehood because Eucharistic Communion is meant to manifest the “perfect union” of the Church’s members. Admitting a non-Catholic who does not accept the integrity of the Catholic Faith (e.g. the papacy, the Marian dogmas, etc) and who continues visibly to adhere to his own community’s beliefs, therefore contradicts the “visible unity of the Church” and the “interior sacramental reality” of the Eucharist.

Bishop Schneider also said canon 844 of the Code of Canon Law (on the administration of certain sacraments to non-Catholic Christians in situations of emergency or danger of death) contains a “problematic and contradictory principle.” He added that the problems being created by the German bishops through their intercommunion proposal are “only the logical consequence of the problematic concessions formulated by canon 844.”

His comments were echoed by those of  U.S. Cardinal Raymond Burke, patron of the Order of Malta, who told LifeSiteNews: “Receiving Holy Communion means that you accept all that the Catholic Church teaches. That is why it is a contradiction to permit non-Catholics to receive Holy Communion on a general basis.”

Burke said canon 844, paragraph 4, “needs to be revised because of its lack of clarity which has led to many contradictory practices in the matter of ‘intercommunion.’”

More machinations from the German bishops

Their comments come a day after the German bishops’ published their controversial pastoral handout on allowing some Protestant spouses to receive Holy Communion, despite concerns about the text from both within the German episcopate and senior Vatican officials.

In a statement on Wednesday the permanent council of the German bishops said they discussed the matter this week at a June 25-26 meeting and described the handout as an “orientation” aid to individual bishops rather than an official document of the bishops’ conference (despite having its origins in the conference where it was overwhelmingly approved).

In their statement yesterday, the German bishops expressed their wish “to provide spiritual assistance for those facing questions of conscience in individual cases who receive pastoral care for inter-denominational married couples who have a grave spiritual need to receive the Eucharist.

They add that such couples “have a very close mutual bond resulting from baptism, faith and the sacrament of marriage, and they share their entire lives.”

On his return flight from Geneva last week (see video here), Pope Francis said the difficulty he has with the handout is “not so much the content,” but that if approved but the bishops’ conference, it “immediately becomes universal.” He said it falls to the diocesan bishop to ascertain whether a Protestant spouse who is married to a Catholic may receive the Holy Eucharist.

The Pope’s comments seem to contradict a May 25 letter sent by Archbishop Luis Ladaria, prefect of the Congregation for the Doctrine of the Faith, to the German bishops. In the letter, Ladaria said the proposed handout is not ready to be published because it “raises a number of significant issues,” “touches on the faith of the Church,” and effects both ecumenical relations and the interpretation of Church law.

Earlier today, respected Vatican journalist Edward Pentin summed up the machinations of the German bishops over the last month, tweeting:

Here below are the full texts of Cardinal Burke’s and Bishop Schneider’s comments on  Pope Francis’ inflight remarks regarding the German bishops’ intercommunion proposal.

“The question of giving Holy Communion to a non-Catholic is a question of faith, in fact, a question regarding a central article of the faith. In 1 Cor 27-29, Saint Paul makes clear the gravity of the matter. Canon law safeguards and promotes the reality of faith involved, namely the Eucharistic species which is the Body, Blood, Soul and Divinity of Christ. As Saint Thomas Aquinas teaches us, the Holy Eucharist contains the entire good of our salvation.

Canon 844, paragraph 4, provides for the giving of Holy Communion to a non-Catholic who has no access to his own minister and who manifests the Catholic faith, if he is in danger of death or, in the judgment of the Diocesan Bishop or Conference of Bishops, another grave necessity warrants it. Both conditions on the part of the person who is to receive Holy Communion must be verified, and there must be a grave necessity such as the danger of death, judged to be present by the Diocesan Bishop or Conference of Bishops.

Of course, the person approaching to receive Holy Communion must be properly disposed, that is, must be in the state of grace and must have observed the Eucharistic fast.”

Can. 844, paragraph 4, needs to be revised because of its lack of clarity which has led to many contradictory practices in the matter of “intercommunion.”

Since the times of the Apostles (cf. Acts 2:42) the integrity of the Faith (doctrina Apostolorum), the Hierarchical Communion (communicatio) and the Eucharistic Communion (fractio panis) are inseparably connected with one another. In admitting a baptized person to Holy Communion, the Church should never dispense him from professing the integrity of the Catholic and Apostolic Faith.

It is insufficient to demand from him only the Catholic belief in the sacrament of the Eucharist (or in the sacrament of Penance and of the Anointing of the sick). Admitting a baptized person to Holy Communion, and not demanding from him as an indispensable prerequisite the acceptance of all other Catholic truths (e.g., the dogmas of the hierarchical and visible character of the Church, the jurisdictional primacy of the Roman Pontiff, the infallibility of the Roman Pontiff, of the Ecumenical Councils and of the Universal and Ordinary Magisterium, the Marian dogmas etc.) signifies a contradiction to the necessarily visible unity of the Church and to the nature of the Eucharistic sacrament itself.

The proper effect of the Eucharistic Communion is namely the manifestation of the perfect union of the members of the Church in the sacramental sign of the Eucharist. Hence, the very reception of Holy Communion in the Catholic Church – even in exceptional cases –  by a Protestant or by an Orthodox Christian constitutes, ultimately, a lie. It contradicts the sacramental sign and the interior sacramental reality, inasmuch as they, the non-Catholics admitted to Holy Communion, willingly continue to adhere visibly to the other beliefs of their Protestant or respectively Orthodox communities.

We can discover in this context also the problematic and contradictory principle of canon 844 of the Code of the Canon Law (about the administration of certain sacraments such as the Holy Eucharist to non-Catholic Christians in situations of emergency or danger of death). This principle contradicts the Apostolic Tradition and the constant practice of the Catholic Church throughout two thousand years. Already in the sub-apostolic time of the second century, the Roman Church observed this rule as Saint Justin witnessed it: “This food is called among us the Eucharist, of which no one is allowed to partake but the man who believes that the things which we teach are true” (Apol. I, 66).

The problem created recently by the German Bishops’ Conference is, – to be honest – only the logical consequence of the problematic concessions formulated by canon 844 of the Code of the Canon Law.