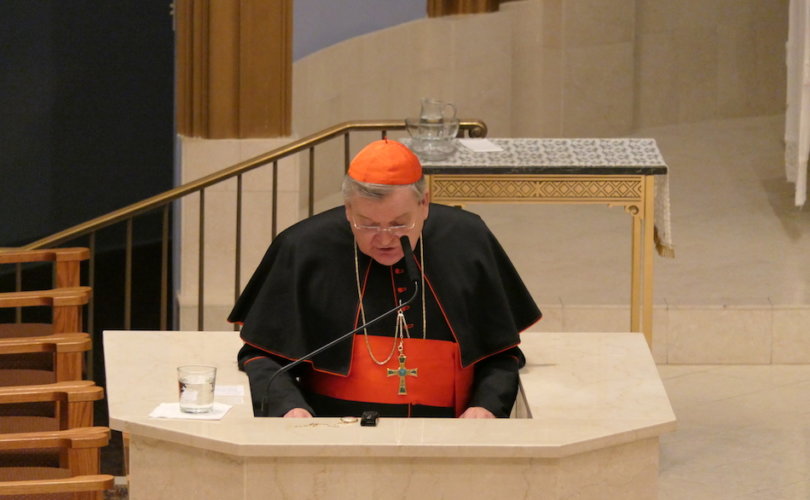 SPRINGFIELD, Virginia, March 27, 2017 (LifeSiteNews) – Cardinal Raymond Burke said it's “simply a scandal” that pro-abortion and pro-contraception population control activist Paul Ehrlich was given a platform at a recent Vatican conference.

Burke was speaking on Friday to a standing room only crowd at St. Raymond of Peñafort Catholic Church as part of its distinguished speaker series. He fielded questions at the end of his talk.

He was asked about how “Paul Ehrlich, a great defender of abortion and a sworn enemy of the Church, was recently given a platform at a Vatican conference.” Ehrlich's speech has caused confusion and has Catholics wondering what's going on in the Vatican, the questioner said.

“It’s simply a scandal,” said Burke. “I’m scandalized by it and I don’t see how any good Catholic wouldn’t be scandalized by that. I don’t understand it.”

He continued, “These days especially, when fundamental truths about human life and the family are getting called into question in our society in most egregious ways, and I think especially our children and young people are being subjected to this…to let such people who have no grounding whatsoever in the truth of the faith [speak at the Vatican] – it just takes my breath away.”

Ehrlich has compared human babies to garbage, said every sexually active woman needs “free access” to abortion and contraception, and said the Catholic Church's moral teachings are “just as unethical” as a “terrorist act.” He has defended mass forced sterilization and even forced abortion.

Bongaarts told the Vatican conference attendees there is an “unmet need for contraception and family planning” and reducing birth rates would help the environment. Ehrlich praised Pope Francis for his environmentalism. Ehrlich later criticized LifeSite and “right wing Catholic websites” for opposing his invitation.

Burke exhorted the faithful to remain true to the teachings of the Church despite rampant confusion. He reminded them of an excellent resource of clarity, the Catechism of the Catholic Church. Burke also addressed transgenderism, Catholic history, the sacred liturgy, and why so many young people are drawn to the Traditional Latin Mass.