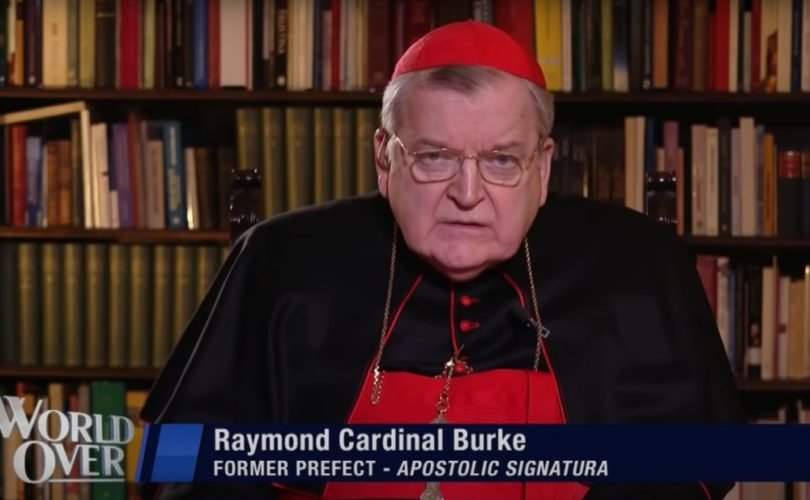 ROME, March 29, 2021 (LifeSiteNews) – Cardinal Raymond Burke said that defiance to the Vatican’s “no” to blessings for homosexual couples by various priests and bishops from different parts of the world — and even suggestions that the Pope did not approve of it — make it necessary for the Holy See to state clearly that Pope Francis approved the declaration and he stands by it.

“The blowback is simply an expression of a worldliness, a mundanity, which has entered into the Church by which the aggressive homosexual agenda is now dominating even in certain ecclesial circles and even among certain bishops,” the Cardinal, who is the former head of the Vatican's highest court and one of the world’s foremost canon lawyers, told EWTN’s Raymond Arroyo last week.

Earlier this month, the Congregation for the Doctrine of the Faith issued a decree stating that the Catholic Church does not have the “power to give the blessing to unions of persons of the same sex.” Pope Francis “was informed and gave his assent to the publication” of the decree, according to the CDF document.

God “does not and cannot bless sin,” the decree stated.

Vatican observers speculated that Pope Francis was distancing himself from the CDF decree in his March 21 Angelus Address, where he said that Christians must sow “seeds of love, not with fleeting words but through concrete, simple and courageous examples, not with theoretical condemnations, but with gestures of love.”

— Article continues below Petition —
PETITION: Call for Vatican to rescind restrictions on private and traditional rite Masses at St. Peter's
Show Petition Text
19356 have signed the petition.
Let's get to 20000!
Thank you for signing this petition!
Add your signature:
Show Petition Text

Cardinal Burke said in his interview with EWTN that it’s not “unreasonable” to interpret the Pope’s Angelus address, as the Jesuit-run America Magazine did, as a reaction to the CDF’s declaration, but it remains, nevertheless, “unclear” what the Pope meant.

“I think it should be made clear that, you know, the Holy See, seeing that the official Jesuit journal in the United States of America makes these claims, the Holy See should make clear that the Pope, indeed, approved this declaration and that he stands by it,” he said.

Earlier in the interview, Burke praised the CDF statement as “most welcome and necessary.”

“It simply states what the Church has always taught and practiced with regard to same-sex attraction and when it leads then to acts which are intrinsically disordered, not according to God's plan. And so, from that point of view, there's nothing in it about which to be surprised.”

Burke said that one phrase in the decree that speaks about “positive elements” in such relationships requires a necessary clarification.

Burke went on to say that bishops who openly defy the decree, specifically mentioning at one point Belgian Bishop Johan Bonny, should voluntarily “renounce” their office.

“The bishop, if he's pained by what's declared by the Congregation of the Doctrine of the Faith, then he must examine himself with regard to his own coherence with the Catholic faith. And, if he is not holding to the Catholic faith, then he should renounce his office. He has to be relieved of his office as diocesan bishop, because this is simply unacceptable. It can’t be,” Burke said.