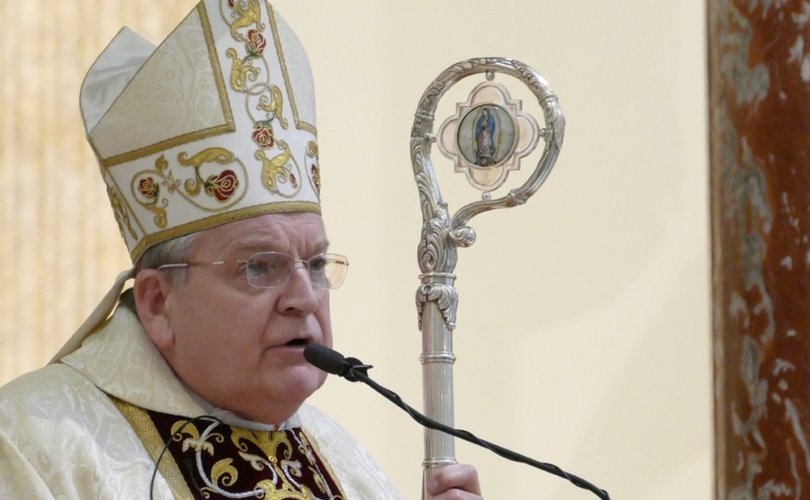 Cardinal Raymond Burke at the “Our Lady of Guadalupe" conference in Wisconsin, July, 2018.Lisa Bourne / LifeSiteNews

LA CROSSE, Wisconsin, December 13, 2019 (LifeSiteNews) – An American cardinal has condemned the “idolatry” of Pachamama at the Vatican and in St. Peter’s Basilica during the October Amazon Synod, calling it a “shocking manifestation of how Satan has entered into the Church.” He called on Catholics to turn to the “one holy mother, the Mother of God, the Virgin of Guadalupe, not Pachamama.”

“Satan makes bold to sow his lies and the seeds of confusion and destruction also in the Church. A most shocking manifestation of how Satan has entered into the Church was the recent cult of the pagan idol, the Pachamama, mother earth, in the Vatican gardens, and even more grievously, before the tomb of Saint Peter in St. Peter’s Basilica,” he said.

The cardinal mentioned that many Catholics have been offering up prayers and fasting in reparation for “the most grievous offence to God: the clear an unconscionable violation of the First Commandment.”

The First Commandment forbids the worship of any gods but the God of Abraham.

“In every time there is always the temptation to idolatry. We seek eternal salvation elsewhere than in the only place where it can be found: in the union of our hearts with the Sacred Heart of Jesus,” the Cardinal said during the homily.

Burke asked the congregation to pray in reparation for this and other forms of idolatry in the Church.

“Let us pray in a particular way today through the intercession of Our Lady of Guadalupe, … our mother, in reparation for the idolatry that has entered into the life of the Church,” he said.

“Let us pray through her intercession that Christ who alone is King of Heaven and Earth may reign in our hearts, may reign throughout the world.”

The cardinal recommended that both the image of the Immaculate Heart of Mary and the image of the Sacred Heart of Jesus be honoured in Catholic households as reminders of important Christian truths. These truths include God being the Author of our being and Mary being our only holy mother.

“May the truth permeate our homes that we come from the hand of God, and not from the goddess, and that we have one holy mother, the Mother of God, the Virgin of Guadalupe, not Pachamama,” Burke prayed.

The carvings of a naked pregnant woman first appeared as objects of veneration in Rome on Friday, October 4, 2019. The statues featured prominently in a ceremony purportedly in honor of St. Francis of Assisi held in the Vatican Gardens in Pope Francis’ presence. During the ceremony, a group of people from the Amazon, including vowed religious, formed a circle around a number of totems on a blanket, including two figures of the naked woman, and prostrated themselves before the statues.

There were multiple statues of the naked pregnant women in Rome that month. One was used as a focal point during the deliberations of the Synod of Bishops for the Pan-Amazonian Synod. Others were used in ceremonies both inside and outside Catholic churches. Several were housed in a chapel in the Carmelites’ Church of Santa Maria in Traspontina until a scandalized young Austrian layman, Alexander Tshugguel, took them out of the church and threw them into the Tiber river. Subsequently, Pope Francis apologized for the action and informed the Synod that the statues had been recovered by Italian police.

Vatican officials seemed not to understand the interest of Catholics in the figure and what it represented. Reporters at Synod press conferences were told that the statues represented “fertility”, “life”, and “woman.” However, volunteers standing by the Amazon exhibit in Santa Maria in Traspontina described the image to visitors as “Pachamama” and “Mother Earth.”

Pachamama is, however, an Andean, not Amazonian, name for the pagan “earth mother” common to many societies throughout history. One anthropologist told LifeSiteNews that in his opinion the figure was an “idol invented for the Amazon synod,” devoid of both history and culture. However, Pope Francis identified the statuettes with his native Argentina’s Pachamama goddess when he told the Synod that police had found the “pachamamas.” Prayers to “Pachamama” were also found in material published by the Mission Office of the Italian Bishops’ Conference in the leadup to the Amazon Synod.

EWTN’s Fr. Mitch Pacwa, SJ, who has served in the Andes, described the use of the carved wooden figure as a “major scandal.”

Cardinal Burke has spoken out before about the reverencing of the Pachamama statues. During a December 8 interview with a French television station, Burke said that “diabolic forces” had entered the Vatican with the idol and that reparation was necessary to defeat them.”

“Something very grave happened during the special assembly of the Bishops’ Synod for the Amazon region. An idol was introduced into St Peter's Basilica – the figure of a demonic force,” he said.

“Therefore reparation is necessary and also prayers, so that the diabolical forces that entered with this idol are vanquished by the grace of God, by Christ who wants St Peter's Basilica to be purified of the sacrilegious act that took place during the Synod.”

Several other prelates, including Cardinal Gerhard Müller, Archbishop Carlo Maria Viganò, Bishop Athanasius Schneider, and Bishop Rudolf Voderholzer of Regensburg, have criticized the use of the image at the Synod on the Amazon.