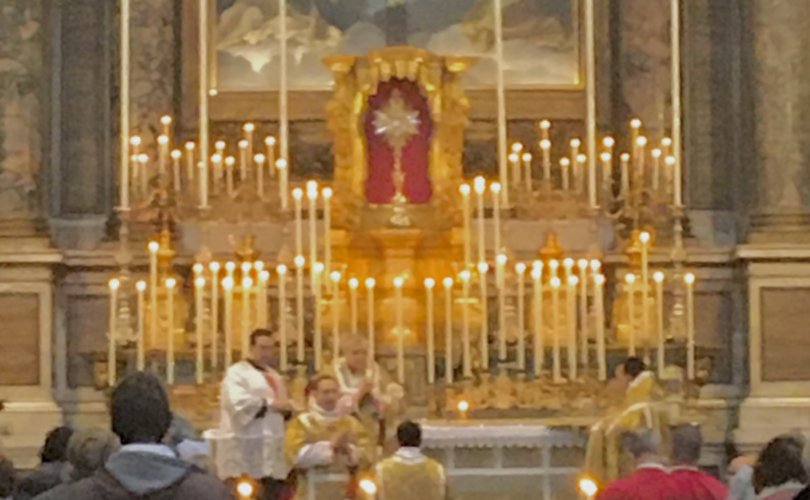 ROME (LifeSiteNews) — Cardinal Raymond Burke offered a pontifical Tridentine Mass at the Church of Santissima Trinita dei Pellegrini on Sunday in his first public Latin liturgy in Rome since he recovered from COVID-19 .

The cardinal has been a long supporter of the Latin Mass and friend of the Santissima Trinita parish.

The Mass was a votive Mass of Corpus Christi with a Eucharistic procession and Benediction to begin the parish’s 40 Hours Devotion. The church was packed standing room only.

The tradition of the 40 Hours Devotion at Santissima Trinita originated with St. Philip Neri, who established the devotion for the Confraternity of Santissima Trinita dei Pellegrini around the year 1550. St. Ignatius of Loyola encouraged the practice during the time of carnival just before Lent to make reparation for sin.

In 1592, for the intention of safeguarding peace in Christendom, in the papal Constitution Graves et diuturnae Pope Clement VIII established the practice of the 40 Hours throughout the city of Rome as “an uninterrupted course of prayer” so that, “at every hour of the day and night, the whole year-round, the incense of prayer shall ascend without intermission before the face of the Lord.”

As reported by LifeSiteNews, on Feb. 4, Pope Francis received two members of the Fraternity of St. Peter in private audience. On Feb. 11, he signed a decree confirming for the priests of the Fraternity “the faculty to celebrate the sacrifice of the Mass, and to carry out the sacraments and other sacred rites, as well as to fulfill the Divine Office, according to the typical editions of the liturgical books, namely the Missal, the Ritual, the Pontifical and the Roman Breviary, in force in the year 1962.”