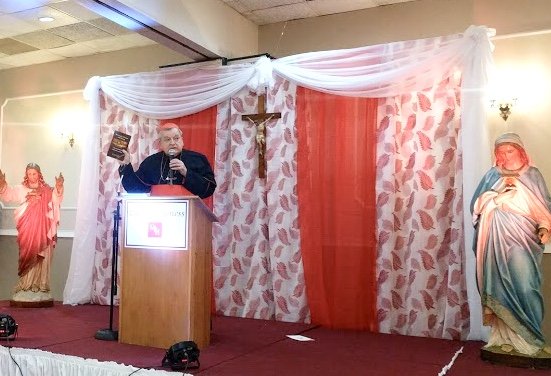 Cardinal Raymond Burke speaks at the Call to Holiness on Oct. 26 in Detroit.Lisa Bloomfield

DETROIT, November 1, 2019 (LifeSiteNews) — Cardinal Raymond Burke told a sold-out Catholic conference in Detroit last weekend that “there is no question that the Church is currently experiencing one of the greatest crises which she has ever known.”

“Today perhaps as at no time in the past there is an ever more diffuse phenomenon of general confusion and error regarding doctrine and morals within the Body of Christ,” he told the crowd of 800 at the Oct. 26 Call to Holiness conference in a talk on “Keeping the faith in a time of confusion.”

And a “frightening manifestation of the gravity of the situation” is the Amazon synod’s working document, which “constitutes an apostasy from the apostolic faith by its denial of the unicity and universality of the redemptive Incarnation of God the Son,” added the cardinal.

The month-long Amazon synod ended Sunday amid heated controversy over the preeminence given to statutes of Pachamama, the Incan fertility goddess, at the event. Signaling more turbulence ahead, LifeSiteNews reported Saturday that the synod’s final document calls for allowing women’s ministries at Mass.

One of two surviving “dubia” cardinals, Burke obliquely referred to the Pachamama controversy when detailing the 40-point “Declaration of truths” he and Bishop Athanasius Schneider — who condemned the use of the pagan statues at the synod in an open letter — and several other bishops published May 31.

“Frighteningly evident” in the synod’s working document is the widespread error that “considers all forms of non-Christian spirituality and religion to be seeds or fruits of the divine Word,” said Burke.

“But as the Declaration makes clear, such cannot be the case with spiritualities and religions that promote any kind of idolatry or pantheism.”

The Declaration also refutes the widespread error “that Judaism and Islam have their own integrity, and that therefore it is wrong to work for the conversion of Jews or Muslims to Christ” by affirming “that salvation comes through faith in Christ alone,” Burke said to thunderous applause.

While the Church faced a “more serious doctrinal crisis” in the Arian heresy of the fourth century, which denied the divinity of Christ, there is today “confusion about many truths of the faith and a growing sense that the Church is no longer certain regarding the truths that she has always taught,” he said.

“The see of Peter not only does not clarify the confusion and correct the error, but appears to favor the confusion, which daily increases.”

An example of this is the Catholic Church in Germany embarking on the “synodal way,”  which some German bishops say is a process to rewrite the Church’s moral teaching, particularly on marriage, family, and human sexuality, added the cardinal.

As for development of doctrine, that never meant changing the doctrine, Burke stressed.

“There are some today who say that the Church's teaching on the intrinsic evil of homosexual acts has developed so that now, in contradiction to the constant teaching of the Church, homosexual acts in certain circumstances are considered to be good and loving,” he said.

Indeed, so great is the confusion that some claim obeying the commandments can actually be a sin, Burke noted. “This may seem absurd to you, and in fact, it is. But this is how the reasoning goes.”

The Declaration of Truths provides “an effective help in giving an account of our faith in an ever growing secular and ecclesial culture of confusion, error and division,” Burke told the conference.

“But let me make clear that confusion is never a good. Confusion is the work of the devil. It always has been and it always will be,” he said to a burst of applause.

Responsibility to redress this confusion “weighs particularly” on bishops, whom Pope Gregory the Great described as “the watchdog who guards the flock against the wolves, warning the flock and driving the wolves away from the flock,” he said.

St. Boniface added, “The watchdog that does not bark when there is a threat to the flock is useless and harmful,” Burke said to more thunderous applause.

In the following Q&A, Burke assured the crowd that “I can’t imagine” the extraordinary form of the Mass being forbidden, as some people fear, given that Pope Benedict XVI’s motu proprio Summorum pontificum has given the traditional Mass “a real foothold” across the globe.

‘There are enemies of the extraordinary form, you know that well, but I don’t think that they’re going to prevail,” he said.

Regarding the Society of St. Pius X, Pope Francis seems intent on reconciliation, but “a reconciliation has to be real,” the cardinal said.

There are still questions regarding the Society’s position on two Vatican declarations, which are not dogmatic: Nostra aetate, on other religions, and Dignitatis humanae, on religious freedom, that must be resolved.

Burke ended by exhorting people against discouragement, the “principal temptation” of Satan.

“Some people are getting very discouraged with what's going on in general in the Church,” he said.

“I always say to them, look, look around how many wonderful young families are practicing their Catholic faith. Look at the number of the seminarians. Look at the pro-life movement, the strength that it has … So we can’t give way to discouragement.”

Burke is a “shepherd after the heart of the people” and a “priest who loves the people,” Call to Holiness Detroit organizer Deborah Bloomfield told LifeSiteNews, adding that for the conference’s closing pontifical Mass in the extraordinary form there was “standing room only.”