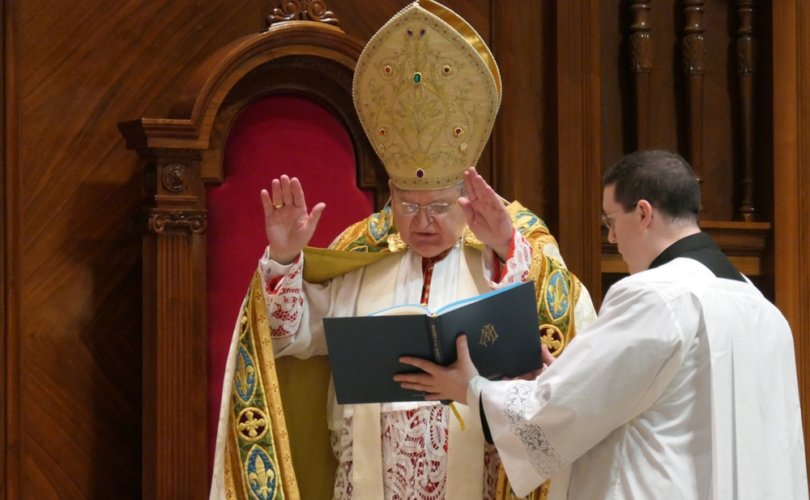 PHILADELPHIA, Pennsylvania, April 25, 2018 (LifeSiteNews) – The fundamental truths about the nature of marriage are under a “diabolical” and “ferocious” attack today, Cardinal Raymond Burke told hundreds of Catholics at Philadelphia’s Cathedral of Saints Peter and Paul on Saturday.

The dubia cardinal, known internationally for his strong defense of Catholic orthodoxy and the pro-life cause, was the keynote speaker at a conference titled Matrimony: Rediscovering Its Truth. Catholics came from all over the east coast and as far as California to hear him speak.

Upon introducing Burke, the cathedral’s rector Father Dennis Gill said Archbishop Charles Chaput was “personally delighted that someone like Cardinal Burke can join us today,” although the archbishop was unable to come to the conference.

“At the present moment in the Church there is perhaps no more critical issue for us to address than the truth about marriage,” said Burke. “In a world in which the institution of marriage [has been] under attack for decades, the Church has remained the faithful hero of the truth about God’s plan for man and woman in the faithful, indissoluble, and procreative union of marriage.”

But “in the present time, certainly under pressure from a totally secularized culture, a growing confusion and even error has entered [into] the Church, which would weaken seriously – if not totally compromise – the Church’s witness.” That would be “to the detriment of the whole of society.”

“Those who love the truth and therefore the Church are called as ‘co-workers of the truth’ and living members of the Body of Christ…to do all within their power to defend the authority of Christ [and his] Church. There could be no place for silence or for an attitude of defeat,” said Burke.

He explained that the “confusion and error” of some “became evident” for the world to see during the synods on the family that led up to Amoris Laetitia.

The assemblies ended up having to address “practices that contradict the Church’s constant teaching and practice regarding Holy Matrimony,” he said. “I refer to practices which would give access to the Sacraments to those who are living in a public state of adultery, and which would condone in some matter conjugal cohabitation in some manner outside the sacrament of matrimony, and genital relations between persons of the same sex.”

In 2014, the synod’s mid-point report “made strikingly clear the gravity of the situation” and did not adequately outline Church teaching.

“It was not a report; it was a manifesto, a kind of insight into a new approach of fundamental issues of human sexuality in the Church,” said Burke. This is “an approach which is revolutionary – that is, which is detached from what the Church has always taught and practiced.”

The cardinal recommended Catholics and people of goodwill read Remaining in the Truth of Christ, to which he contributed, which plainly explains why Communion may not be extended to the divorced and “remarried.”

He also emphasized that a synod cannot change Catholic teaching by a majority vote.

‘The Church has to call things by their proper names’

Recently, some have “declared that the Church must update its practice and above all its language in order to address herself effectively to a totally secularized culture,” Burke said as he discussed the relationship of faith and culture.

“Some have gone so far as to assert that the Church can no longer speak of the natural law, of intrinsically evil acts, of irregular unions, and so forth,” he began. “Their point is that the language itself already makes the culture hostile.”

Abandoning truthful language would be the Church giving “the impression of wanting to draw near to the culture without a clear identity of her own and of what she has to say to the culture. According to divine wisdom, the Church must always speak the truth with love.”

“Yes, the Church should go to the peripheries of today’s culture, but always secure in her identity, manifesting the greatest compassion which necessarily involves respect for the truth of the cultural situation which many times is marked by confusion and error regarding those fundamental truths of human life and its credo, which is the family,” he said.

“The Church has to call things by their proper names in order not to risk contributing to the confusion and error,” the cardinal continued. “Honest people who live in such a culture have a thirst for the truth and for its proclamation in charity. To encounter the protagonists of such a culture without manifesting the truth of Christ’s clear words would be a serious lack of charity. It is certainly a cause of grave scandal – that is, leading people to be confused or even leading them into error about what the Church actually teaches.”

Burke noted that Jesus was very compassionate toward the Samaritan woman at the well and the woman caught in adultery: “The Lord is full of understanding for their situations.”

“The Church should not lose its confidence in the natural law inscribed in every human heart and in its full expression in the saving work of Our Lord,” said Burke. Cultural confusion about the meaning of human sexuality leads to the breakup of marriage, “corruption of children and young people,” and ultimately self-destruction.

“Disordered sexual activity, sexual activity outside of marriage, and the media’s constant, powerful, and false messages regarding our identity as men and women are all signs of the urgent need of a new evangelization which begins in marriages and families, and through marriages reaches the entire culture,” he said.

Catholics must bear witness to the “distinct gifts of man and woman, who both dispose themselves to the service of Christ and His mystical body by means of a chaste life.”

Follow the examples of saints who died protecting marriage

Cardinal Burke also skewered certain false notions of tolerance and charity that persist in the Church and society.

“Today’s popular notion of tolerance is not securely grounded in the moral tradition,” he said. It often means “tolerating ways of thinking and acting which are diametrically opposed to the moral law revealed to us in nature and in sacred scriptures.”

“The approach at times becomes so relativistic and subjective that we do not even observe the fundamental logical principle of non-contradiction, that is that a thing cannot be and not be at the same time and in the same respect,” he cautioned. “In other words, certain actions cannot at the same time be both true to the moral law and not true to it.”

“In the context of charity, tolerance means unconditional love of the person who is involved in evil” but “complete abhorrence” of the evil in which the person is involved, he said.

Catholics should look to St. John Fisher, St. Thomas More, and St. John the Baptist – martyrs for the sanctity of marriage – for inspiration and ask for their intercession, Cardinal Burke advised.

“Let us follow their example and let us invoke their intercession so that the great gift of married life and love will be evermore revered in the Church and in society,” he said.

Like other conference attendees, the cardinal ate a simple boxed lunch of a ham and cheese sandwich at the archdiocesan pastoral center.

The day ended with a Holy Hour, Confessions, and an Ordinary Form (Novus Ordo) Mass at which Cardinal Burke was the main celebrant.