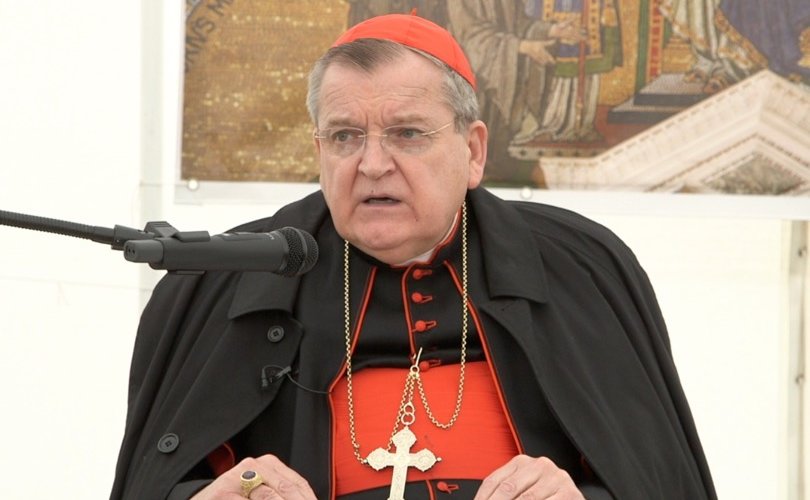 July 26, 2016 (LifeSiteNews) — Cardinal Raymond Burke would have never been born had his mother followed a doctor’s advice to abort him, the outspoken pro-life Catholic prelate revealed in a new book-length interview.

In Hope for the World: To Unite All Things in Christ, Burke told French journalist Guillaume d’Alançon that his mother became seriously ill while pregnant with him and spent several weeks in the hospital.

“This was in 1948. The doctor suggested that my mother have an abortion. He told her: ‘You already have five children, it is important for you to be in good health so as to take care of them,’” Burke said. “My parents refused. I should explain that the doctor was not Catholic. My parents told him that they believed in God and that Christ would give them the necessary help. My mother gave birth to me, and everything went well. … I could very well have been killed.”

Burke, an American cardinal, is the former Prefect of the Apostolic Signatura, the Vatican’s highest court. He now serves as the patron of the Sovereign Military Order of Malta.

Burke said his parents instilled in him concern for the pro-life cause.

“I grew up in a world that was very sensitive to the most helpless,” he said. “I remember the concern that we had in our family for the elderly, the sick. In my childhood, I was acquainted with persons with disabilities and learned from my parents the great respect that we should have for those who are frail. My father had only one sister, and she had Down syndrome. Our family always paid her a lot of attention.”

Burke said the millions of abortions committed yearly in the United States “cannot continue” and warned that abortion is at the root of violence in society.

“Every day, I think of each life that is destroyed, irrevocably lost, by human agency,” he said. “With the arrival of abortion, society has experienced an increase in violence. The murder of the smallest and most defenseless human beings is the root of social violence. Now, some people say that people with serious illnesses or the elderly are useless. That is truly horrible. You can see the profoundly selfish, individualistic logic that is behind this view of a human being and his dignity.”

The cardinal urged pro-life activists to never give up despite the resistance and obstacles they face defending pre-born children, often from “very combative feminist groups” and institutions that commit abortions.

“We must always bear witness, in season and out of season. When the moment comes, the Lord, Who is the master of time, will make this witness fruitful,” he said. “It does not matter that it was poorly received.”

In fact, “the strongest (pro-life) witness must be given when the resistance is strongest,” Burke said. He warned that the devil “tries to sow doubt in our minds about defending human life publicly” because he does not want the right to life to be defended publicly. However, citizens have a duty “to witness to the moral law” no matter how difficult it may be, Burke explained.

The devil “subtly tempts us to remain silent, to mute our conscience, to tell ourselves that we are personally against abortion but do not have to express our faith and moral convictions in public,” Burke said.

Burke said he has received letters containing pro-abortion arguments and sometimes “abusive language,” but that his duty was to receive them with “patience and serenity” and calmingly articulate Church teaching.

“We do not choose the time in which God asks us to live, and we must accept the fact,” he said.