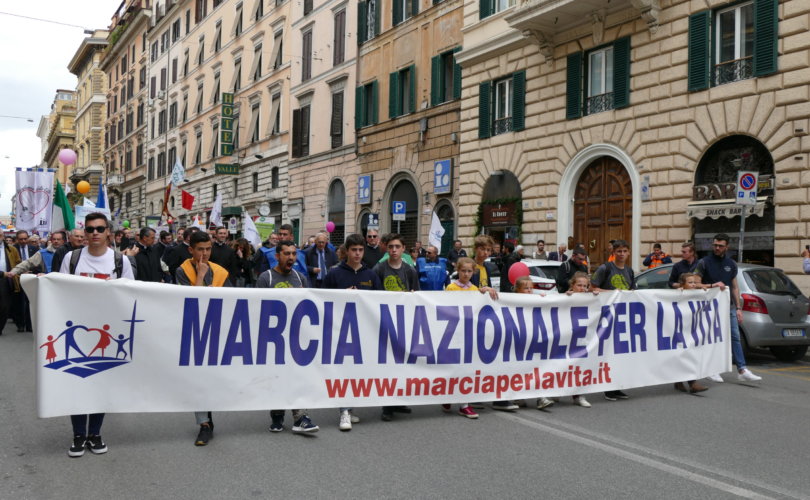 ROME, Italy, May 18, 2019 (LifeSiteNews) — Thousands of joy-filled pro-lifers young and old from across the world took part in the Rome March for Life today beneath a sunny sky and behind Catholic Cardinal Raymond Burke, who lead the prayerful, song-filled demonstration through the busy streets of one of the most beautiful cities in the world. Dutch Cardinal Willem Eijk was also present at the event’s outset.

Organized by Virginia Coda Nunziante, president of the Associazione Famiglia Domani, and her team of volunteers, this year’s march marked the ninth such undertaking. Nunziante told LifeSite in an interview recently that abortion is “the blood sacrifice that the devil asks of today’s societies” and that “when you try to hinder, reduce or fight it, the devil unleashes even more violent campaigns in order not to lose ground.”

Despite a rainy start to the day, event organizers couldn’t have asked for a more perfect setting. The sun’s emergence around noon seemed to energize the hundreds of priests and women religious as well as the many others who with loud, though always cheerful, chants made their opposition to the slaughter of unborn children known on Rome’s historic roads.

Among the many flags participants carried, perhaps the most visible were the ones of the Polish participants. Several dozen banners of Mary the mother of Christ were easily visible too. Voci del Verbo, an international youth organization founded in 2014, was perhaps the loudest cohort. Led by an energetic Italian priest, the group featured nonstop drums and dancing against abortion.

Gianna Emanuela Molla, the daughter of St. Gianna Beretta Molla (1922-1962), participated in the march as well. Gianna was the last child of her mother, who developed a large fibroma during her pregnancy. She refused a medical intervention due to the danger it could cause to her uborn baby. St. Gianna told her husband, “If you must choose between me and the baby, have no hesitation at all, I demand that you choose the baby. Save her.” She died a week later. John Paul II beatified her in 2004.

Famed Catholic historian Roberto de Mattei and Hungary’s Ambassador to the Holy See Eduard von Habsburg also took part in the march, as did many of the veteran pro-life activists who attended the Rome Life Forum just a day earlier at the Pontifical University of St. Thomas Aquinas.

At the march's conclusion at the Piazza della Madonna di Loreto, several international pro-life activists spoke to the excited crowd. In a pre-recorded video message, pro-life actor Eduardo Verastegui encouraged participants to keep fighting for the unborn. Verastegui, who acted in the hit 2007 pro-life movie “Bella,” has previously said he wants to build the tallest statue of Jesus in the world in Mexico.