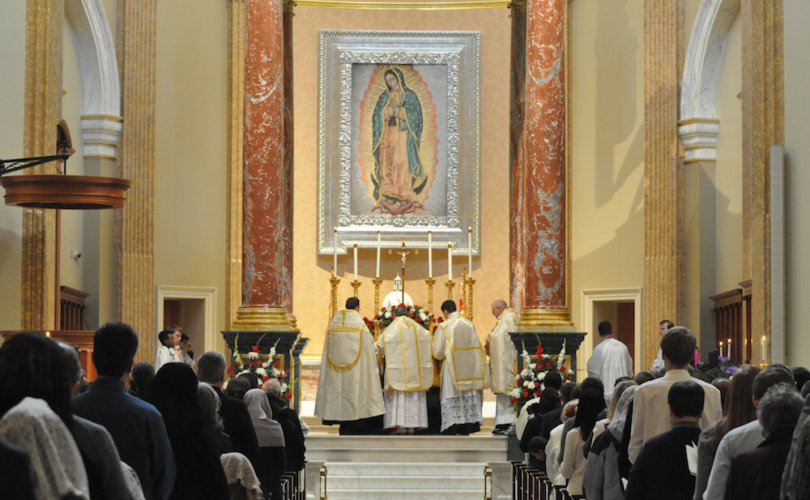 Celebrating a Pontifical Solemn High Mass in the Extraordinary Form at the Shrine of Our Lady of Guadalupe in La Crosse, Wisconsin, on the Saturday just before the feast day of the Shrine’s namesake, the cardinal, a strong proponent of traditional liturgy, described how potently the ancient Mass brings Heaven to earth, and God to man.

The older form of the Mass powerfully personifies the apostolic tradition of priests who have carried Christ’s presence forth in the Eucharist since its inception at The Last Supper, he said.

“The offering of the Pontifical Mass according to the 'usus antiquior', the more ancient usage in the Church, makes evident to us how divine grace flowing immeasurably and unceasingly from the glorious pierced heart of Jesus comes to us in the highest and most perfect manner in the Holy Eucharist,” Cardinal Burke told an estimated 500 Mass pilgrims in his sermon.

“The more ancient usage,” he continued, “which was the ordinary form of the Roman Rite of the Holy Mass from the time of Pope Saint Gregory the Great until the reforms of the sacred liturgy after the Second Vatican Ecumenical Council, powerfully manifests the apostolic tradition, the unbroken line of Christ’s abiding presence with us in the Church by means of the apostolic ministry, by means of the pastoral charity of the apostles and their successors from the Last Supper, to the celebration of the Holy Sacrifice of the Mass this morning.”

The uplifting beauty of Mass in the ancient form “unveils the truth” that Christ, along with His sacrifice for us on the Cross, comes down to earth during the Mass, he said.

“The sublime beauty reflected in the careful articulation of the more ancient usage unveils the truth that here on the altar of this church, Heaven descends to Earth — Christ seated in glory at the right hand of the Father — descends to the altar and makes sacramentally present his sacrifice on Calvary and its incomparable fruit, the heavenly bread of His Body, Blood, Soul and Divinity.”

A Pontifical High Mass is celebrated by a bishop and is characterized by additional chants, servers, candles, and liturgical rites.

It was the first such Mass at the Marian shrine founded by Cardinal Burke some 18 years ago while he was bishop of La Crosse, and he came to celebrate the Mass at the invitation of the local chapter of Una Voce, a lay organization that works to preserve and promote the Mass in the Extraordinary Form.

His Eminence said it marked a historic moment in the regular celebration of the Holy Mass according to the Extraordinary Form of the Roman Rite for the Shrine.

He said too that celebrating both forms of Mass in the Roman Rite makes the encounter with Christ to which Our Lady is leading us more complete, and he called as well for the Pontifical Mass in the ancient usage to be celebrated more frequently at the Shrine.

“In a particular way, the celebration of the two forms of the one Roman Rite makes possible that fuller and richer encounter with Christ to which Our Lady of Guadalupe is constantly leading us,” he stated. “It is my hope to be able to celebrate more regularly the Pontifical Mass according to the Extraordinary Form or more ancient usage in fidelity to the mission of this holy place.”

The statements on the traditional liturgy by Cardinal Burke, known for his upholding of Catholic orthodoxy, come on the heels of his clarifying late last month that the Extraordinary Form of the Mass was on equal par with the new Mass, after Pope Francis’ recent referring to the ancient liturgy as an “exception” for “a certain mentality of some groups and people who had nostalgia” for it.

His celebration of the Pontifical High Mass also occurred amid continued controversy in the wake of the dubia submitted to the pope by him and three other cardinals requesting clarification on troubling parts of the apostolic exhortation Amoris Laetitia. The cardinals had released the dubia in November, after two months of waiting for Pope Francis to respond to their initial inquiry.

Cardinal Burke had said last month in an interview with the National Catholic Register’s Edward Pentin that in the absence of a response from the Holy Father to the request for clarification, the four cardinals would have to address the situation, specifically that they would have to consider the rare practice of a “formal act of correction.”

The cardinal, who with four other cardinals, an archbishop and three theologians, published the book Remaining in the Truth of Christ on Holy Matrimony in preparation for last year’s Ordinary Synod on the Family, was removed in November, along with another prelate known for Catholic orthodoxy and strong stances for life and marriage, Australian Cardinal George Pell, from the Vatican’s Congregation for Divine Worship and the office’s membership filled with numerous “progressive” appointments.

This dismissal followed the pope’s removal of Cardinal Burke two years ago as prefect of the Vatican’s high canonical court, the Apostolic Signatura. The pope has also removed him from the Congregation for Bishops, which oversees the selection of new bishops. Cardinal Burke was named patron of the Sovereign Order of Malta in 2014, the appointment largely viewed as ceremonial.

The Blessed Mother’s December 12 feast during Advent has particularly rich significance, Cardinal Burke said at the Marian Shrine’s Pontifical High Mass, as “It is the Blessed Virgin who keeps our eyes fixed upon Him who alone reveals to us eternal truth and enables us to live the truth in pure and selfless love.”

Our Lady of Guadalupe is the title for the Blessed Virgin Mary, who appeared to Aztec Indian peasant St. Juan Diego in Mexico several times beginning on December 9, 1531. Millions of Aztecs converted in a short time after the apparition. She is the patroness of the Americas, Mexico and of the unborn, and her devotion also shows that God’s salvation is for all peoples. The Minor Basilica of Our Lady of Guadalupe in Mexico City is reportedly the most visited Catholic pilgrimage site in the world.

“She manifests our destiny to be restored to communion with God through the mystery of the redemptive incarnation,” Cardinal Burke said in his sermon for the Pontifical Mass. “She shows us the way of her Divine Son, who alone is our salvation.”

It is in uniting ourselves with Mary to Christ’s Eucharistic sacrifice and offering our sufferings for the salvation of the world, the cardinal said, that we best prepare for the Christmas Solemnity, and that we best know the abiding presence of Christ with us in the Church, as well as best anticipate His coming in glory on the last day.

“Chris alone is our salvation — He alone wins the victory of eternal life,” Cardinal Burke said. “Won with Him, above all, the Eucharistic sacrifice, His victory is also ours.”