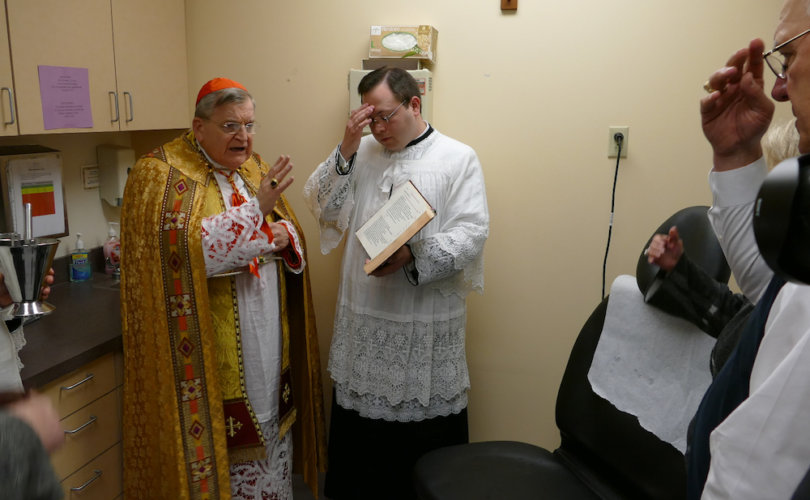 Cardinal Raymond Burke blesses a procedure table donated by the Knights of Malta to the Duchesne Clinic in Kansas City, Kansas.Lisa Bourne / LifeSiteNews

KANSAS CITY, Kansas, February 10, 2017 (LifeSiteNews) – In keeping with his role as Patron for the Sovereign Order of Malta, Cardinal Raymond Burke blessed a gift of medical equipment Thursday given by the Knights of Malta to a medical clinic serving the poor and uninsured.

The Cardinal blessed a $10,000 procedure table recently given to the Duchesne Clinic with a grant from the world’s oldest medical mission, a lay religious order founded in 1113 serving people in 120 countries.

Despite the controversy swirling around Cardinal Burke in Rome with the aristocracy of the Knights of Malta, local Knights and especially the simple faithful have found in him a humble servant of Christ and representative of His Church.

People moved by the cardinal’s visit

Cardinal Burke’s visit to the clinic came during one of his U.S. trips for various commitments, including the celebration of a Pontifical Low Mass in the Extraordinary Form at the adjacent Saint Mary-Saint Anthony Church.

Leavenworth resident Bingo Dickerson drives 60-plus miles once a month for diabetes education at the clinic and just happened to have an appointment while Cardinal Burke was there to bless the procedure table from the Knights.

Dickerson, a Baptist, asked one of the priests accompanying Cardinal Burke if he could meet him. It didn’t matter to Dickerson that he isn’t Catholic.

“I’ve never met a cardinal before,” Dickerson said. “Even though I’m a Baptist, every side has good people.”

He was very taken with the cardinal and his visit to bless the medical equipment.

“The Spirit was there when he was dedicating the table,” said Dickerson, who was moved as well by Cardinal Burke’s pausing to meet him personally.

“He smiled and he was very nice,” he continued. “He didn’t brush you off.”

Dickerson wishes he would have known the cardinal was celebrating Mass at St. Anthony Church nearby just before the blessing at Duchesne. He said he would have come earlier to attend the Mass.

“For him to take the time, he’s not too busy to say something to the little man,” he continued. “For a cardinal to make time … when I greeted him I got a sense of humbleness … and that’s in the Good Book.”

Mass attendees at the ethnic German parish infused with Irish and Hispanic cultures lined up to greet him after the liturgy before he headed to the clinic.

Cardinal Burke’s blessing of the medical equipment for the Duchense Clinic gave a boost to its efforts. The clinic staff prepared a reception to welcome Cardinal Burke that included Hispanic pastries.

“It’s beautiful,” said Dominico Nguyen of the cardinal’s visit to the clinic.

The Nguyens are residents of Kansas City, Missouri, and attend Our Lady of Perpetual Help Parish. They knew the cardinal from his time as archbishop of St. Louis.

Nguyen praised Cardinal Burke for his enduring defense for the sanctity of human life and for his efforts to uphold the sacrament of marriage.

“I’m sure there are a lot of people that support him,” Nguyen continued.

Cardinal Burke has been the patron, or papal representative of the Knights of Malta, responsible for its spiritual interests and relations with the Vatican since his August 2014 appointment by Pope Francis.

However, current speculation has the cardinal’s role as the sovereign order’s patron now null after Pope Francis appointed a special delegate last week as official spokesman “in all relations” between the Holy See and the Knights, with the power for “spiritual and moral renewal of the order.”

The special delegate appointment followed weeks of controversy over the pope’s  encroachment on governance and sovereignty of the order, which is subject to international law.

The move is regarded by many as a response to the dubia from Cardinal Burke and three other cardinals to Pope Francis seeking clarity on Amoris Laetitia in regard to Church teaching on the sanctity of marriage.

Local members from the Knights of Malta had approached the Duchesne Clinic asking what its needs were, said executive director George Noonan, and after a successful grant application process, the result was the procedure table. The Knights had provided a grant to the clinic three years ago for supplies to give shingles shots.

Jim and Georgia Lynch of the local Knights of Malta were instrumental in the Duchesne Clinic obtaining the grant for the procedure table.

Noonan said the procedure table’s arrival just before Cardinal Burke happened to be in the area and available to bless it was a “nicely matched need.”