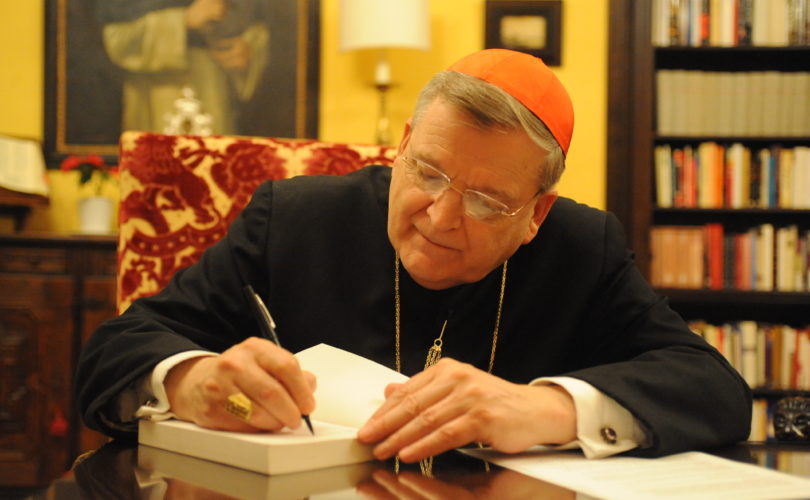 Burke was addressing those proposals as outlined in the reports from the 2014 Extraordinary Synod on the Family which took place last October, and not the Motu Proprio, since his prepared remarks predated yesterday’s release of the Motu Proprio. The crowd was directed to refrain from asking questions on the Motu proprio as the cardinal had not had time to review it sufficiently.

The most startling changes in the annulment procedure were to drastically lessen the time for acquiring an annulment to as little as 45 days.  Moreover, the Motu Proprio eliminated the need for a second confirming judgment and left to the local bishop rather than canonical judges, the decision on annulments.  Speaking of similar proposals as part of the Synod documentation and not as part of the Motu Proprio, Burke noted that the canonical procedures had been developed over centuries to give certainty of arriving at the truth.

He stressed the importance of determining the truth on the matter, noting that it deals with the “salvation of souls.”

Burke noted that similar proposals to alter the process along the lines that were suggested at the Synod (and now implemented in the Motu Proprio) were also proposed before the 1983 reformation of canon law and were rejected by Pope St. John Paul II. Moreover Burke noted that the Vatican already attempted a lessening of the procedures for the United States in the 70s and early 80s, leading to an impression of “Catholic divorce.”

Burke firmly rejected the notion that people could be too weak to conform to God’s law on marriage, saying that Our Lord has assured us that He gives to us all the grace we need to live our lives in His will.

“In the present moment when the attacks on matrimony and on the family even within the Church seem the most ferocious,” he said, “it is the Church who must show to the whole of society the truth in all its richness and thus the beauty and the richness of the truth about marriage.”

“The Synod Fathers and all faithful Christians must be willing to suffer,” he added, “to honor and foster Holy matrimony.”

He warned that “confusion and error on holy matrimony” are being “sown by Satan in society and in the Church.” Marriage, he said is “under a ferocious and diabolical attack.”

Responding to Church leaders who have called for false accommodation with the world, even for silence in the face of homosexual liasons being accepted as “marriage,” he said we must “call things by their proper name in order not to risk contributing to confusion and error.” That, “according to Divine wisdom, the Church must always speak the truth with love.”