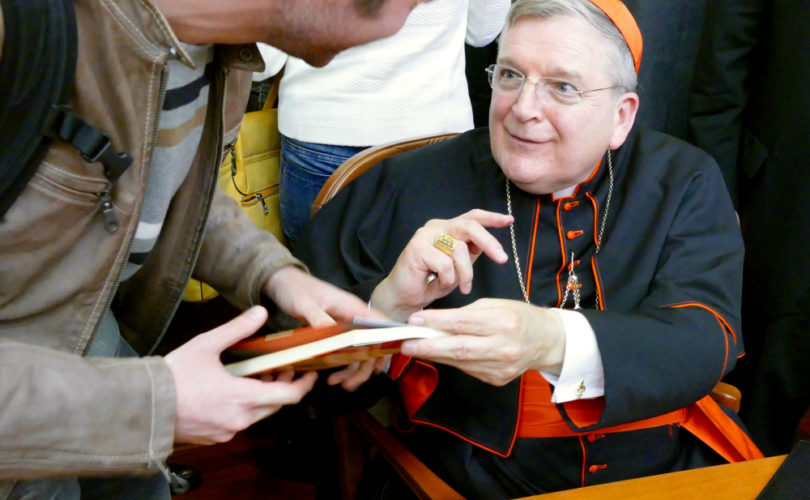 ROME, October 20, 2015 (LifeSiteNews) — If being a “fundamentalist” means upholding the basics of the Catholic faith, then Cardinal Raymond Burke is happy to wear the label.

“If fundamentalist means someone who insists on the basic things, I am a fundamentalist,” he told the Italian magazine Il Foglio last week.

The cardinal, former prefect of the Vatican’s Apostolic Signatura, its highest court, and current patron of the Sovereign Military Order of Malta, was asked about the label in regard to his vocal opposition to change in pastoral practice toward those in “irregular unions,” as has been part of the discussion at the Vatican’s ongoing Extraordinary Synod on the Family.

Amidst the contentious Synod happening now in Rome, Burke expressed amusement to LifeSiteNews at his being termed in such a way.

At the same time, he minces no words when it comes to the role of the Church in the world and the part he plays as one of its princes. The cardinal says he does not teach or act for himself, rather for God.

“I belong to Christ,” he told Il Foglio. “I act in his person. I teach only what He teaches in his Church, because this teaching will save souls.”

Cardinal Burke dismissed the use of labels, because labeling a person, he says, disregards the truth of what the person does, but he was clear about which label he does bear. “I am a Roman Catholic,” he stated. “I always hope to be,” and he hopes as well that it can be said at the end of his life that he died in the arms of the Church.

Cardinal Burke has spoken forthrightly during both this year’s and last year’s installment of the Synod about the importance of maintaining the truth of what the Church teaches.

Both Synod sessions have involved debate over how to minister to Catholics who are in sinful situations, such as the divorced and civilly remarried and homosexuals. Liberal prelates at the Synod have advocated for allowing Communion for individuals in these situations, while more orthodox bishops have stood up for preserving Church principles, which reserve the Eucharist for those who are not in a state of grave sin.

Cardinal Burke took part in last year’s Synod session as a member of the Roman Curia, but he was since removed by Pope Francis from his post as head of the Apostolic Signatura.

A primary effort on the part of those advocating for bypassing Church law on Communion reception is known as the “Kasper Proposal,” a pitch made by German Cardinal Walter Kasper for some time now to allow Communion for divorced and remarried Catholics without renouncing their sin.

The proposal draws a reaction characteristic of Cardinal Burke, that of pastoral clarity. “The position of Cardinal Walter Kasper is not compatible with the Church's teaching on the indissolubility of marriage and holy communion,” he said. “Certainly, the most holy sacrament is for sinners – that we are all of us – but for repentant sinners.”

Discussion of Kasper’s proposal at the Synod has created great confusion, says Cardinal Burke, with people now assuming the Church has changed its teaching, or some bishops simply allowing Catholics who are not in a state of grace to receive Communion.

“There is no doubt that the confusion is already great,” he said, “and that the Church, for the good of souls and for his faithful witness to Christ in the world should clearly state its perennial teaching on the indissolubility of marriage and the Holy Communion.”

“For his passion, death, resurrection and ascension, Christ has also raised the natural sacrament, as participation of divine, supernatural sacrament, conferring on married the grace to live faithfully until the end, the truth of their marital status,” he stated. “If the Church would change the teaching on the indissolubility of sacramental marriage, it would attack the sacrament of marriage as natural, marriage as God created it from the beginning.”

Cardinal Burke takes any criticism implying he’s fundamentalist in stride, saying he is by no means closed off to the world and the crisis it faces.

“It (the world) is confused and wrong on the most fundamental truth: the inviolability of human life, the integrity of marriage and its incomparable fruit, family, and religious freedom as an expression of the irreplaceable relationship with God. For this reason, I face the world with true compassion that offers the world the truth in love.”

It is incumbent on the priests of the Church to speak the truth to their flock, he said. “A priest who – faced with the situation of today's culture – not clearly announced the truth, does not practice pastoral charity,” Cardinal Burke said, “and is lacking in the witness inherent in his office.”