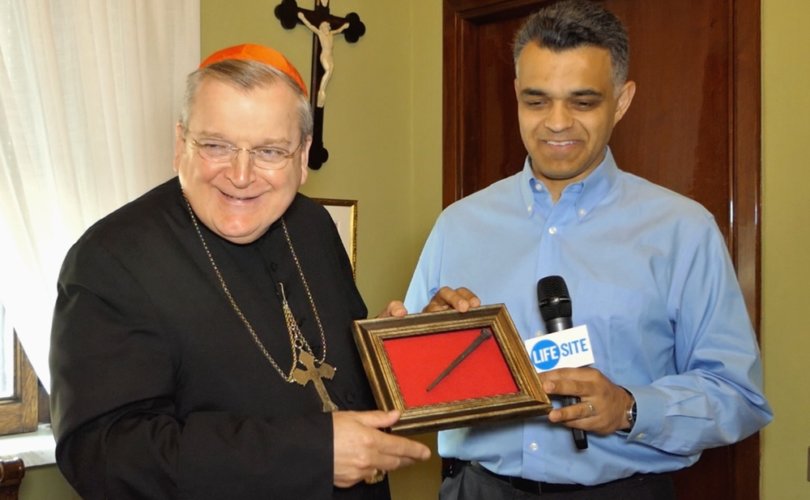 ROME, May 19, 2017 (LifeSiteNews) — Cardinal Raymond Burke received in person on Friday the Law of Life Achievement Award, a replica of the nail that held Jesus to the cross. The award, given to those who have endured suffering in the fight to defend and protect life and family, honors the Cardinal for his work in “defending faith, life, and family from all quarters.”

“I’m very honored to receive this award. I hope to continue to be able to suffer for the faith inspired by this recognition,” he said.

Cardinal Burke was presented with the award in his apartment in Rome by LifeSiteNews Editor-in-chief John-Henry Westen. He was originally given the award in absentee at the January 26 Law of Life Summit in Washington, D.C., before the March for Life.

During the January summit, Westen told the crowd of pro-life leaders and activists who gathered at the annual event that Cardinal Burke “has suffered a great deal for the cause of life and family.”

“He has cheerfully borne this suffering, his public humiliation that he has received from all quarters. Every time you speak with him, you will hear his concern that has nothing at all to do with himself, always for the faith, for life, and for family,” said Westen at that time.

Cardinal Burke, patron of the Sovereign Military Order of Malta and one of the world’s foremost authority on Roman Catholic Canon law, has been an outspoken champion of the Church’s pro-life and pro-family teachings.

In his commitment to defending the sacraments while holding fast to the Church’s teaching against abortion, the Cardinal has frequently insisted that persistently pro-abortion Catholic politicians be denied Holy Communion, as stated by Canon law.

He has called fighting the all-pervasive ‘contraceptive mentality’ “essential” for restoring the culture of life, has defended parents as the primary educators of their children, and has strongly defended marriage as the sacred union of one man and one woman.

Burke has urged Catholics on numerous occasions in the past two years to brace for martyrdom in the face of growing opposition to the Church’s clear teachings on marriage and the family.

His motto “Secundum Cor Tuum” (After Your Own Heart) comes from the prayer “O good Jesus, make me a priest after Your own Heart.”

The Cardinal was vocal about problems arising during the Synod on the Family, stating that a door to offering Holy Communion for civilly divorced and remarried Catholics “does not exist and cannot exist.” He called the final synod report “deceptive in a serious way,” especially for its treatment of the sacraments and of parental responsibility for education.

In a 2015 interview, Burke said he was happy to be labeled a “fundamentalist” if that meant upholding the basics of the faith.

He caused a firestorm last year when he stated that the Pope’s exhortation Amoris Laetitia was “not an act of the magisterium,” but a “personal reflection of the Pope” and therefore not “binding in conscience.”

His strong, uncompromising voice has made him enemies, even within the Church, and at the highest levels.

In 2013, the Cardinal was removed by Pope Francis from the Congregation for Bishops, the influential department that oversees the selection of new bishops, while liberal-minded prelates, such as Washington's Cardinal Donald Wuerl and Westminster Archbishop Vincent Nichols, were added to replace him. Under Pope Benedict, Burke is said to have played a major role in the appointments of some of the currently most orthodox bishops in the United States and other nations.

Burke was also demoted by Pope Francis in 2014 from being the Prefect of the Apostolic Signatura due to what critics said was his uncompromising defense of Church's teaching on life and family issues. He was removed from the Congregation for Divine Worship in November, after submitting the “dubia” to the Pope.

Westen told pro-life leaders at the January event that “there is no one I have ever seen who wears red more deservingly than Cardinal Burke,” referencing the color symbolizing martyrdom.

“He has not shied away from truth, despite being demoted, ridiculed, objectified, attacked by the world’s media, and cruelly defamed even by his brother bishops,” said Westen in additional comments for this report.

Since 2013, the Nail Award has been bestowed each year upon a recipient who has demonstrated a commitment to the defense of faith. Often that commitment has resulted in sacrifice and persecution. The award is announced at the annual Law of Life Summit which is held in Washington, D.C.

The nail, which was handcrafted by 85-year-old James Metzger from Port St. Lucie, Florida,  is a replica of the foot-nail used to crucify Jesus Christ.

“I felt inclined to make the nails because the labor drew me closer to the actual crucifixion and to the horrible pain that went with it,” said Mr. Metzger. “I wanted to feel it and to understand the device they used.”