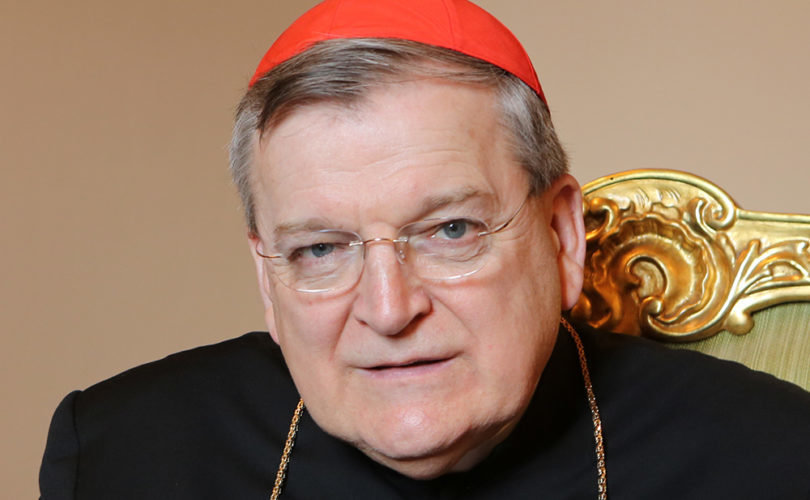 February 9, 2015 (LifeSiteNews.com) – Vatican watchers were surprised this weekend when Cardinal Raymond Burke, one of the leading voices for orthodoxy in the Church, said he would be willing to “resist” Pope Francis if the pontiff were to attempt to change the Church's practice of denying Communion to those in “second marriages.”

Speaking to France2 television, Burke, who was recently removed by Francis as head of the Church’s highest marriage court, said, moreover, that there was no analogy between homosexual activity and marriage.

“I cannot accept that Communion can be given to a person in an irregular union because it is adultery,” the American cardinal said. “On the question of people of the same sex, this has nothing to do with marriage. This is an affliction suffered by some people whereby they are attracted against nature sexually to people of the same sex.”

Asked, “If, perchance, the pope will persist in this direction, what will you do?” Cardinal Burke replied, “I shall resist, I can do nothing else. There is no doubt that it is a difficult time; this is clear, this is clear.” The cardinal agreed that the situation is “painful” and “worrisome”.

The comment is coming as a surprise to those who, concerned at the direction the Church seems to be taking towards the goals of the progressivist left, are nonetheless accustomed to more circumspect language from prelates like Burke. Until recently, the US Cardinal, as a senior member of the Vatican’s curia and a long-serving diocesan bishop, had expressed himself with a pinpoint precision marked by reserve.

In the normal course of journalistic coverage of Vatican affairs, one of the rules is, “Never ask a hypothetical,” a type of question that is normally dismissed as unanswerable. Taken alone, the fact that exactly this kind of question by France2 was answered at all is significant. And the fact that it was answered in such a way as to imply that the cardinal himself is disturbed by the progression of events was bound to generate huge international response and to come to the attention of those inside the Vatican’s machinery.

An increasingly pressing question for Catholics concerned about the recent turn of events has been how to respond appropriately. What are Catholics, whose love of the papacy is built into their faith, to do when a pope seems to indicate, that the “non-negotiables” of their religion, namely the indissolubility of marriage could be open to negotiation after all?

Many have looked to Burke for guidance in an increasingly confusing situation. Known for his loyalty to the Petrine office, the cardinal is not given to off-the-cuff outbursts or careless expression in his interviews. After his comment after the Synod that the pope’s lack of clarity has damaged the Church generated a small flurry of interest, Cardinal Burke issued a statement clarifying his position, saying that he had never intended to criticize Pope Francis.

Now that he has clearly indicated that “resistance” is required if the worst fears are realized, some are asking what form, exactly, this would take. At the Catholic website 1Peter5, Steve Skojec called Burke’s comment this weekend a “significant escalation in rhetoric.” Commenters at the site, known for attracting Catholics who believe what the Church teaches, have voiced the pressing question: “I’m still wondering how you expect this to play out. Cardinal Burke ‘resists’ how?”

What form, concretely, would such resistance take? There are precious few examples in Catholic history of a pope challenging established doctrine. Catholics accustomed to equating loyalty to the person of the pope with orthodoxy are in a quandary, with few historical precedents. They wonder what this “resistance” will entail at the ground level.

One commented, “Assume arguendo that the pope were to change the Church's uninterrupted discipline in this regard. Cardinal Burke makes a public statement that the pope is in error and he won't follow him on this point.

“Exactly what effect will that have on anything, practically speaking? The majority of bishops are going to follow the pope. And what of the laity? Of what does our resistance consist?”

While Francis himself said nothing publicly at the Synod, there is a campaign afoot, centred mainly in the leading voices of the German hierarchy, to allow divorced and civilly remarried Catholics to receive Communion. At the publication of the mid-term Relatio, this push was expanded to include a call to “accept and value” the homosexual “orientation,” reportedly authored by the Italian Archbishop Bruno Forte, a theologian appointed to the Synod organizers by Pope Francis.

As one of the leading defenders of the traditional Catholic teaching, Burke has been giving interviews steadily – reiterating and defending the Catholic Church’s concept of marriage – since Cardinal Walter Kasper first made the suggestion in February 2014 that the Church allow divorced and civilly remarried Catholics to receive Holy Communion as though there was no problem.

Burke gave an interview in November with Spanish media, following the Synod, in which he said, “It seems to many that the Church’s ship has lost its compass.” To  Vida Nueva, Burke said that the information about what was said in the Synod hall was being distorted by the Holy See’s press office and by the official documents produced by the Synod’s own organizers.

The document produced half-way through the proceedings, “looked like a manifesto to change the discipline of the Church concerning irregular unions,” the cardinal said. The small circles formed to discuss the issues in depth were misrepresented by the Synod’s organizers. The bishops in these groups had to specifically demand that “our works to be published.”

“Until then, the public did not know what we thought. Everything was controlled and manipulated, if I may say so,” the cardinal said.

“Many bishops and priests contacted me saying that persons in irregular unions came to their parishes wanting to receive the sacraments,” Burke said. “They said that the Pope wants it.”

“We are not speaking of a minor issue, but a fundamental one. The pillar of the Church is matrimony. If we do not teach and live this truth well, we are lost. We stop being the Church. In the Synod, the teachings of the Church and a position that contradicts them cannot be placed at the same level.”

What is not widely understood by the secular media is that in the eyes of the Catholic Church, divorce is not merely forbidden, it does not exist at all; it is an ontological impossibility. For faithful Catholics, the existence of divorce is accepted only as a kind of concession of necessity to a secular world that lives in a state of denial. It is a “legal fiction” and is accommodated only under protest.

The Church has always had confidence that the words of Christ were accurately rendered and that the Second Person of the Holy Trinity was neither mistaken, misquoted nor misrepresented by the Gospel authors.

The full story is told in the Gospel of Matthew, that says:

Some Pharisees came to him to test him. They asked, “Is it lawful for a man to divorce his wife for any and every reason?”

“Haven’t you read,” he replied, “that at the beginning the Creator ‘made them male and female,’ and said, ‘For this reason a man will leave his father and mother and be united to his wife, and the two will become one flesh’? So they are no longer two, but one flesh. Therefore what God has joined together, let no one separate.”

“Why then,” they asked, “did Moses command that a man give his wife a certificate of divorce and send her away?”

Jesus replied, “Moses permitted you to divorce your wives because your hearts were hard. But it was not this way from the beginning.  I tell you that anyone who divorces his wife, except for sexual immorality, and marries another woman commits adultery.”

Therefore, from Christ’s own uncompromising words comes the Catholic doctrine that divorce simply has no objective, “ontological” reality. A person who has divorced and remarried, according to the words of Christ, is living in a state of adultery, mortal sin, and as such, cannot receive Communion until he has repented and changed his lifestyle.

Marriage for the Church is a sacramental reality, as hard and immutable as diamond, that can exist only between a man and a woman, for the procreation and nurturing of children and the sanctification of all members of the family. As such it is a bastion, defended by the Catholic Church, against the entire edifice of the Sexual Revolution.

Even a failure to explain it robustly can be seen as a serious failing in times when the institution of marriage is under attack as it never has been since the establishment of Christian civilization.