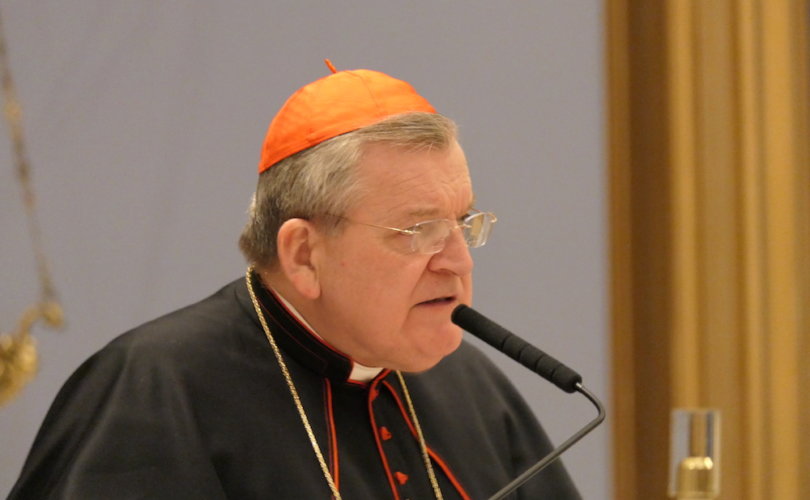 October 18, 2019 (LifeSiteNews) — Cardinal Raymond Burke urged Catholics to preach Christ rather than look to pagan religions. He made his remarks at a celebration held this month by the Italian media agency La Nuova Bussola Quotodiana.

‘Go to the ends of the earth’ was the missionary theme of La Nuova Bussola’s annual celebration on October 6. More than a few felt they had ventured close by the time they reached Shalom-Queen of Peace, Palazzolo sull’Oglio, where the day was hosted. Lost in the cornfields between Brescia and Bergamo, even Google Maps struggled to navigate to the 200-strong rehabilitation centre for young drug addicts. It was soon apparent to the 1,000 participants, though, that having stepped off the beaten track, they had stepped into a living miracle. Here Christ the Redeemer heals and restores even the most wounded and broken lives with His divine love. The community, founded and led by charismatic Sister Rosalina, is currently the most successful rehabilitation centre in Italy. “Heart speaks to heart,” as Saint John Henry Newman would say, is the unforgettable experience of an encounter with the Shalom community. Here, the Bussola community gathered from the four corners of Italy to be confirmed in the faith and the fellowship of Christ.

A missionary theme for the day to communicate the mission of La Nuova Bussola Quotidiana: to announce Christ Son of God, is the meaning of existence, through the form of online media. In light of that mission, the director, Riccardo Cascioli, announced that La Nuova Bussola Quotidiana would soon be available on separate web pages in English and Spanish for the growing body of readers abroad.

Cardinal Burke came especially from Rome to celebrate Holy Mass for the Bussola community and to give the lectio magistralis on the meaning of the Christian mission in the world today. The mission is our baptismal duty, he said, asking everyone present “to pray with your whole heart and witness the truth and Catholic faith to the whole world.”

It is who and what we bring to the ends of the earth that was the focus of the afternoon sessions. Catholic writer and journalist Vittorio Messori spoke about his most acclaimed recently republished work, Jesus Hypotheses — a book with a method that affirms that it is reasonable to believe that Christ is the son of God.

The challenge of announcing Christ here and today was the focus of the rest of the day, with sessions on Saint John Bosco’s two prophetic columns of salvation: the Eucharist and Mary, Mother of God. Sister Gloria Riva, founder of a monastery of perpetual adoration, spoke of her vocation and of Christ and the Eucharist being the core of existence. Doctor Franco Serafini, cardiologist and author, talked about the scientific tests he conducted on consecrated hosts from the four most recent Eucharistic miracles, which all demonstrate the same historical truth: the gift we receive at Communion is the heart of a man subjected to severe physical and psychological stress.

Diego Manetti, author and Mariologist, explained that Mary Most Holy appears to fulfil the role entrusted to her from the cross: a mother who leads her children to her Son so they may have peace and joy in this life and eternal life in the next. Sister Rosalina Ravasio, founder of the community Shalom, closed the meeting by describing the daily presence of Mother Mary in the community she leads, where destroyed lives rediscover their dignity and place in the world, in the body of Christ.

Riccardo Cascioli interviewed Cardinal Burke during the conference. Cardinal Burke explained that evangelization is not proselytism. Instead, evangelisation is the testimony of our faith to others who remain free to accept or reject it, but it is never right not to witness our faith.