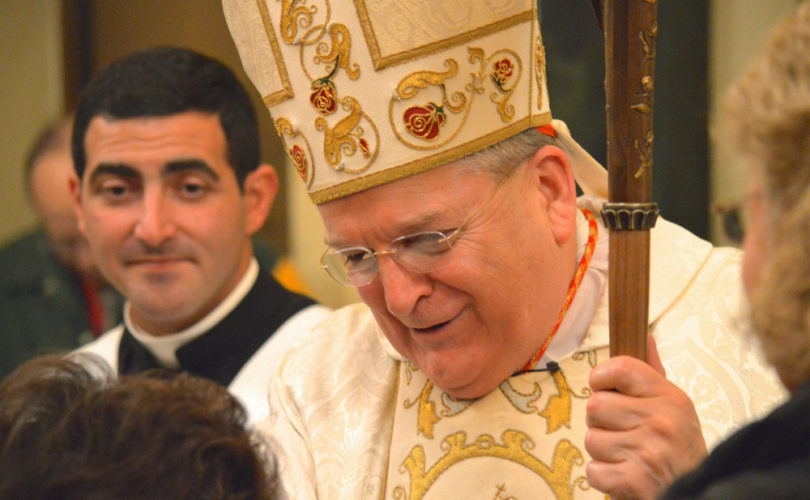 Cardinal Raymond Burke said in an interview this week that it is “amazing” that those who have defended Catholic teaching and practice on withholding Communion from those in publicly “irregular” sexual situations, are being accused of “being against the Holy Father, and of not being in harmony with the Church.”

The blog Rorate Caeli carried a translation of the comments Cardinal Burke made this week to the French language daily Le Figaro. Burke, one of a small group of vocal opponents of the so-called Kasper proposal, said that October’s Synod of Bishops on the family “was a difficult experience.” Those who were “in line” with Cardinal Walter Kasper had control of the Synod’s processes, he said.

Burke noted the insertion of homosexuality into the Synod’s discussion, saying that it “has no relation with the question of marriage.”

The Synod’s direction appeared to be predetermined by these, he said, adding that the mid-term document “seemed to have had already been written before the interventions of the Synod Fathers.” That mid-term Relatio, understood to have been written by the Italian liberal theologian, Archbishop Bruno Forte, called for the Church to change its practice, and to “accept and value” the homosexual “orientation.”

Cardinal Burke reiterated his point, made many times during and since the Synod, that the mid-term Relatio “made no reference to Scripture, nor to the Tradition of the Church, nor to the teaching of John Paul II on conjugal love,” an unprecedented occurrence for a document of the highest authorities of the Catholic Church. He added that it is “highly offputting” that the paragraphs on Communion for remarried divorcees and homosexuality were retained in the Final Relatio – and now in the Lineamenta, the document issued in preparation for next year’s Synod – even though they had been rejected in a vote by the Synod bishops.

Asked whether it is legitimate for a cardinal to be critical of a pope, Burke said, “A Cardinal, in certain situations, has the duty to say what he truly thinks to the pope.” He said, however, that between a cardinal and the pope it is “impossible for there to be a divergence on a matter of doctrine and discipline of the Church.”

“In an age filled with confusion, as we see with Gender Theory, we need the teaching of the Church on marriage,” Burke said.

Cardinal Burke receives petition signed by 30,000 supporters: says, ‘do not give way to discouragement!’