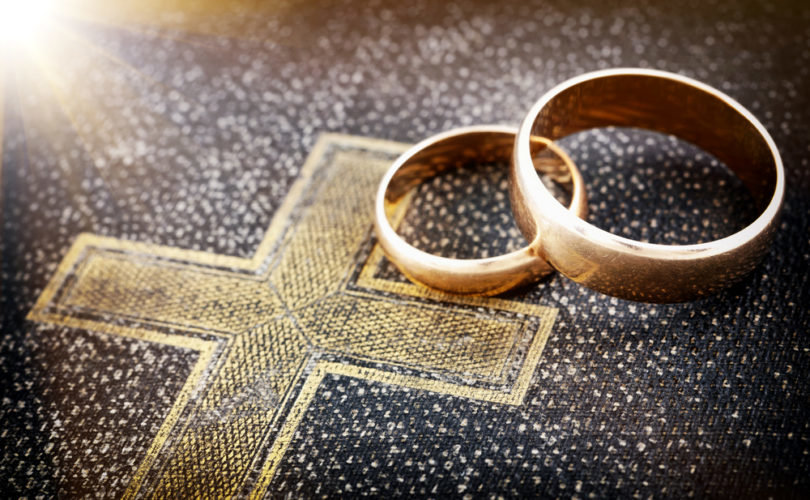 November 18, 2015 (CardinalNewmanSociety) — Sound catechesis on marriage is “a great, great responsibility” for Catholic schools and colleges, Cardinal Raymond Burke told a representative of The Cardinal Newman Society on Sunday following an address on “Sacred Liturgy and Holy Matrimony” in London, England.

Cardinal Burke, patron of the Sovereign Military Order of Malta and ecclesiastical advisor to the Newman Society, was speaking at the annual conference of Centre International d’Etudes Liturgiques (CIEL) UK, a group dedicated to the study of sacred liturgy and its effects on the culture. Following his comments, the Cardinal was asked about the responsibility of Catholic schools and colleges to provide sound catechesis on marriage.

“It’s a primary responsibility” for Catholic schools to conduct age appropriate instruction for younger children, Cardinal Burke replied. “I remember when I was going to elementary school, we had the Baltimore Catechism and we were taught about marriage from the first years of school. Then as we got older, we got the second and third edition and it got more substantial, but it was always the same in building and growing.”

Catholic colleges and universities “most especially should be attentive both in what’s taught in the theology classes, but also in the discipline in the life of the university to reflect the truth about marriage,” he said, adding, “It is a great, great responsibility.”

Representatives from The Cardinal Newman Society were in London on their way to Rome for the Vatican Congregation for Catholic Education’s World Congress on Education this week in recognition of the 25th anniversary of Ex corde Ecclesiae and the 50th anniversary of Gravissimum Educationis.

In his prepared remarks, Cardinal Burke emphasized the necessity of sound catechesis on marriage “in an age when so many contrary and false presentations of marriage are propagated by the mass media.”

“Catechetical texts must be substantial in content, assisting the catechized to come to an integral understanding of the great mystery which is holy matrimony,” he said.

Cardinal Burke also discussed the importance of keeping the marriage rite focused on the recognition “that it is Christ Himself who is present to join the couple in the faithful lifelong and procreative union.” He ended his remarks arguing that “care must be taken for the juridical structure of marriage consent and the marital life so that the Church witnesses only licit and valid celebrations of holy matrimony.”

“The liturgical norms and other norms of canonical discipline,” he said, “reflect the many centuries of the Church’s experience of Her pastoral care of those preparing for marriage and of the married.”

The pastoral care of married persons was a central focus of the Synod of Bishops on the Family last month.

At a press conference that took place in Rome during the Synod, Cardinal Burke warned about corrupted teachings on human sexuality and marriage in Catholic schools.

“One thinks, for example, of the compulsory so-called ‘gender education’ in some schools, which is a direct attack on marriage at its foundation and, therefore, on the family,” he said.

“Good parents and good citizens,” said Cardinal Burke, “must be attentive to the curriculum which schools are following and to the life in the schools, in order to assure that our children are being formed in the human and Christian virtues and are not being deformed by indoctrination … Today, for example, we sadly find the need to speak about ‘traditional marriage,’ as if there were another kind of marriage.”

“There is only one kind of marriage as God has given it to us at the Creation and as Christ has redeemed it by His saving Passion and Death,” he said.

The Newman Society recently reported on the formation of students at several Catholic colleges recommended in The Newman Guide to Choosing a Catholic College to understand and live the Church’s teaching on marriage.

Faculty and alumni the Newman Society interviewed from Franciscan University of Steubenville in Ohio; Mount Saint Mary’s University in Emmitsburg, Md.; The Catholic University of America in Washington, D.C.; Christendom College in Front Royal, Va.; and Benedictine College in Atchison, Kan., all described how communicating the truth and beauty of the Church’s teaching on marriage is an important part of faithful Catholic education.