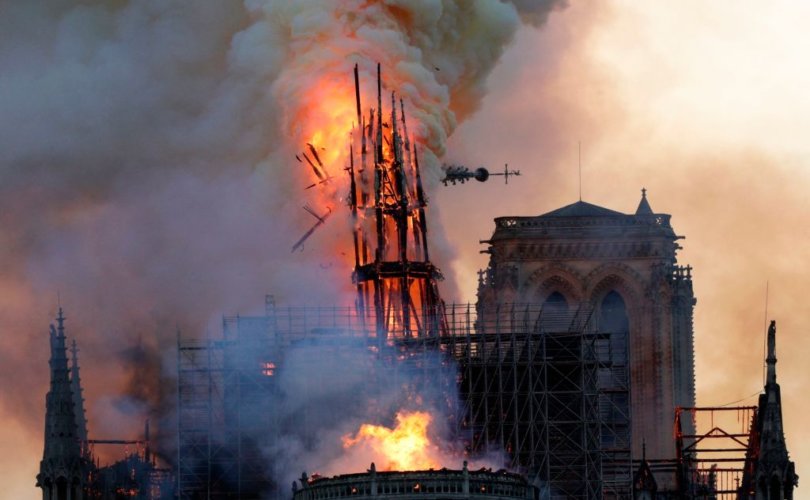 The steeple and spire collapses as smoke and flames engulf the Notre-Dame Cathedral in Paris on April 15, 2019.GEOFFROY VAN DER HASSELT/AFP/Getty Images

ROME, April 16, 2019 (LifeSiteNews) — The devastating fire that ravaged the Cathedral of Notre Dame in Paris is a “sobering reflection” on the “attacks upon the infinite beauty of the faith by the grievous sins and crimes of our day,” a prominent cardinal has said.

In comments to LifeSite on Tuesday morning, Cardinal Raymond Burke said from Rome that he is “profoundly saddened by the massive destruction done to the magnificent Cathedral of Notre Dame in Paris by yesterday’s fire.”

On Monday evening, as Catholics enter Holy Week and celebrate the central mysteries of Redemption — the Passion, Death and Resurrection of Jesus Christ — the world watched in horror as the heart of worship in France, the “eldest daughter of the Church,” was engulfed in flames.

“Before such a tragic event,” Cardinal Burke said, “I join in prayer with the devout Catholics of Paris, of France, and of the whole world, for whom the Cathedral of Notre Dame is a living expression of our deep faith in God and our ardent love of Him.”

While many have noted that Notre Dame is an emblematic monument for the entire nation of France, Cardinal Burke stressed that “for Catholics, churches are not monuments but are the House of God, in which we really and truly encounter Heaven.”

“Because of God’s immeasurable and unceasing love of us in the Church, churches are also the House of the Church,” he said.

“For that reason,” the cardinal continued, “the faithful in the 12th Century employed only the most beautiful and enduring materials in constructing the Cathedral which was intended to last throughout the ages until the Coming of Our Lord at the end of time.”

“In his homily for Vespers in the splendid Cathedral of Notre Dame in Paris, on September 12, 2009,” he said, “Pope Benedict XVI paid tribute to the Cathedral as a ‘living hymn of stone and light in praise of that act, unique in the annals of human history: the eternal Word of God entering our history in the fullness of time to redeem us by His self-offering in the sacrifice of the Cross.’”

“The Cathedral of Notre Dame is truly a hymn of praise to the Mystery of the Incarnation of God the Son in the womb of the Blessed Virgin Mary,” the cardinal added.

He also noted the power of Notre Dame’s beauty to convert men’s hearts.

“It is fitting to recall that it was in the same cathedral that the poet Paul Claudel (1868-1955) had a singular experience of the beauty of God, during the chanting of the Magnificat while attending Vespers on Christmas of 1886,” he said. “His singular experience on that Christmas night led to his conversion to the Catholic faith.”

“It should not escape us that the via pulchritudinis, the way of beauty, is a most important and irreplaceable means of announcing God to a culture fraught with secularism and materialism,” Cardinal Burke, who founded Marian Shrine of Our Lady of Guadalupe in the diocese of La Crosse, said.

Speaking to the symbolism of Notre Dame engulfed in flames last evening, the cardinal said: “Viewing the ravage of the Cathedral of Notre Dame by yesterday’s fire, men and women of faith are led to consider the attacks upon the infinite beauty of the faith by the grievous sins and crimes of our day.”

“What took decades of dedicated labor of the most excellent kind to build is destroyed in a matter of a few hours.”

“Yesterday’s event,” he went on, “is a sobering reflection upon the destructiveness of man’s rebellion against the beauty, truth, and goodness with which God has created us and our world and has redeemed us and our world by the Redemptive Incarnation of His only-begotten Son, the very event celebrated in the building of the Cathedral of Notre Dame.”

Cardinal Burke also recalled “with deepest gratitude” the “great privilege” he was accorded by Cardinal André Vingt-Trois, then Archbishop of Paris, of celebrating a Pontifical Mass on Sunday, September 27, 2015, in the Cathedral of Notre Dame.

“The memory of the offering of the Holy Mass in such a totally inspiring edifice will never leave me,” he said. “Everything about the Cathedral pointed to the great Mystery of Faith celebrated in the Holy Mass.”

Cardinal Burke concluded by saying: “With devout Catholics of Paris, of France and of the universal Church, I pray that somehow, imitating the sacrificial faith, hope and love of those who first built the Cathedral of Notre Dame, we may all join to restore what has been lost through yesterday’s fire.”