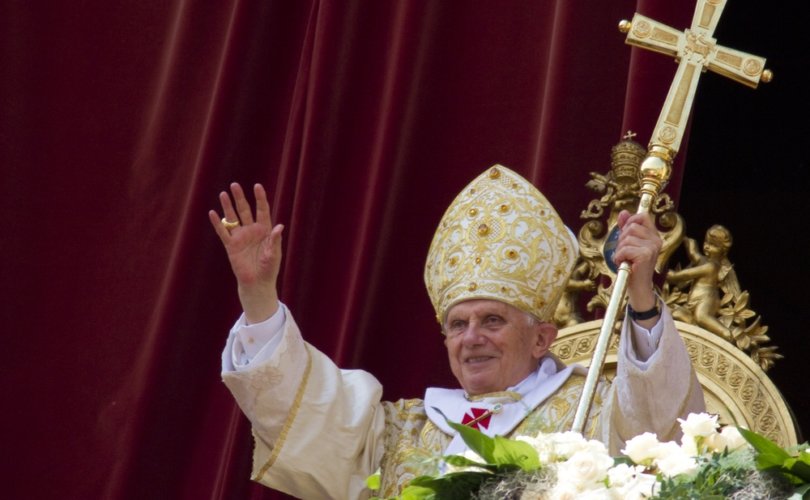 LA CROSSE, Wisconsin, August 29, 2017 (LifeSiteNews) — Cardinal Raymond Burke said in a recent interview that Pope Emeritus Benedict’s “most splendid contribution” to the Catholic Church was his work of restoring the liturgy.

“There is no question in my mind that the most splendid contribution of the pontificate of Pope Benedict XVI was in the area of restoring the correct order and beauty to the Sacred Liturgy,” said Burke in an interview with The Wanderer published August 21.

Some liturgists are interpreting the declaration, according to Vatican expert Sandro Magister, as a “halt ordered” from Pope Francis to Pope Emeritus Benedict’s program of reviving authentic liturgy through a rediscovery of the Traditional Latin Mass.

“And in effect, in the long speech delivered by Pope Francis there are abundant citations of Pius X, Pius XII, and Paul VI. But for Benedict XVI, a tremendous scholar of the liturgy, there is not so much as a nod,” said Magister.

Notably absent from Pope Francis’ statement on the liturgy, pointed out Magister, is any mention of Benedict’s 2007 edict Summorum Pontificum, which allowed priest to celebrate the Traditional Latin Mass and thereby “preserve the riches” found in it.

Cardinal Burke said in his interview with The Wanderer that Pope Benedict XVI’s teaching on the liturgy was “so profound because he had the courage to issue Summorum Pontificum.”

“The teaching contained in that document will certainly endure in its effects,” he said.

Before becoming Pope Benedict XVI in 2005, Cardinal Joseph Ratzinger was a world-renowned liturgist who wrote some of the most revered books to this day on the subject, including The Feast of Faith and The Spirit of the Liturgy.

In the preface to The Spirit of the Liturgy published in 2000, then-Cardinal Ratzinger wrote that the liturgy envisioned by the Vatican II Council Fathers was “endangered” and even “threatened with destruction” because of the introduction of novelties and innovations foreign to it.

“In 1918 … the (Roman Catholic) liturgy was rather like a fresco. It had been preserved from damage, but it had been almost completely overlaid with whitewash by later generations. … The fresco was laid bare by the Liturgical Movement and, in a definitive way, by the Second Vatican Council (1962-65),” he wrote.

“But since then the fresco has been endangered. … In fact, it is threatened with destruction, if the necessary steps are not taken. … What is imperative is a new reverence in the way we treat it, a new understanding of its message and its reality, so that rediscovery does not become the first stage of irreparable loss,” he added.

Cardinal Burke said in The Wanderer interview that Cardinal Robert Sarah, Prefect of the Congregation for Divine Worship, has pointed Catholics in a “good direction” in implementing what Sarah has called a “reform of the reform.”

“First, he encouraged offering the Mass with everyone facing the Lord [ad orientem]. This will help so much to restore the sense of worship and to show that the Mass is not some kind of social event between the priest and parishioners, or the parishioners among themselves. Rather, it is an action of the whole community with the priest at the head acting in the person of Christ [in persona Christi], of ‘worshiping the Father in spirit and truth’ (John 4:23) as our Lord said to the Samaritan woman at the well. I think this would be a very good place to begin,” said Burke.

“Cardinal Sarah addressed a second area of reform at the 2017 Sacra Liturgia Conference in Milan when he asked once again for consideration of receiving Holy Communion kneeling and on the tongue. I think those are two areas to address that would be very effective,” Burke continued.

“I think the matter of orientation of all towards the Lord with the priest at the head (toward the East if possible, unless it is physically impossible because of the geographical location of the church) and the manner of receiving Holy Communion reverently on one’s knees and on the tongue are important places to start,” he concluded.