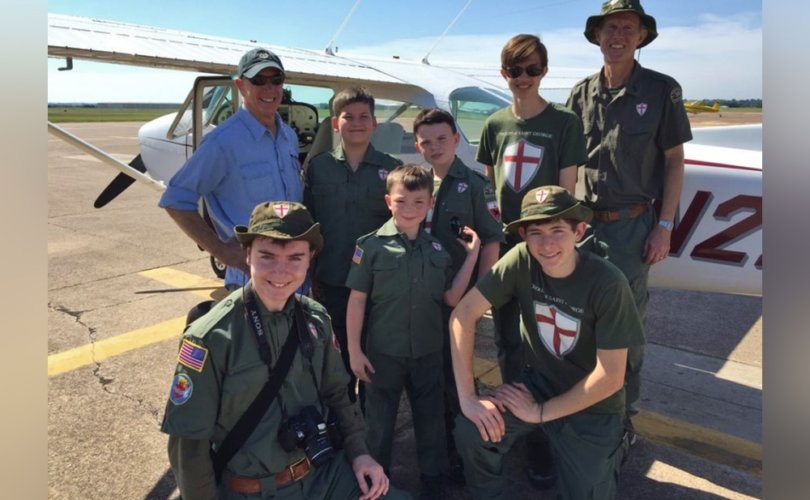 The cardinal was referring to Fort Worth, Texas, Bishop Michael Olson’s May 16 approval of the Troops of Saint George as an official Catholic apostolate for his diocese.

Bishop Olson had offered congratulations “on this important step in the life of the Troops of St. George,” adding that the Troops were to “be assured of my prayerful support.”

“Bishop Olson's approval of our organization is confirmation that we are following the path the Holy Spirit has laid out for the Troops of Saint George, Brian Squibbs, the group’s National Director, for Communications and Recruitment told LifeSiteNews. “As we re-envision the outdoors movement for the formation of Holy Catholic men in authentic masculinity, we have set out from day one to follow the Magisterium of the Catholic Church. This vetting process and approval as a Catholic Apostolate of the Diocese of Fort Worth ensures we are doing just that through our mission and program materials.”

These efforts gained notice from the cardinal.

“The Troops of Saint George, in an excellent way, assists Catholic boys and young men to develop a sound appreciation of nature, in accord with the Law with which God has created all things,” Cardinal Burke said in his letter.

“In a particular way,” the cardinal continued, “the Troops of Saint George safeguard and foster the irreplaceable relationship between fathers and sons as a fundamental experience of the Fatherhood of God and of His special gifts to men for the good of the family and of all society.”

“Boys and young men are thereby helped to know their vocation in life, whether God calls them to the married life, to the consecrated life or to the Holy Priesthood,” he added, “and to embrace and follow it with pure and selfless love.”

The Troops of Saint George (TSG) is a fraternal Catholic nonprofit apostolate for priests, laymen, and young men combining adventure with virtue. Founded in 2013 by Catholic author and professor Dr. Taylor Marshall, TSG is based in Keller, Texas, and in those five years it has grown to over 1,300 members in 41 fully chartered troops. Marshall continues to be a member of a local Dallas/Fort Worth area troop with his sons.

The troops experience reverent Masses, pray the Rosary and go to Confession in outdoor settings. They catch fish for Friday meals and take part in archery, rock climbing, marksmanship and learning survival skills. Each of these activities is approached to instill Catholic virtues and foster a love for the priesthood and a reverence for the sacrament of Matrimony. The troops also promote support for local parishes, priests, bishops, and the community by being available for works of mercy and service.

Steve Doll started Troop 1571, based at the Shrine of Our Lady of Guadalupe, in La Crosse, Wisconsin, in April of 2017. Doll has one son, age seven, who is a junior cadet, and two more sons he said are anxiously waiting to join the ranks at the minimum cadet age of six.

“As a Troop Captain, I have seen busy Catholic dads from a wide variety of professions take on a new spirit of adventure with their sons,” Doll told LifeSiteNews. “They are trying outdoor activities with their sons that they may not have tried without Troop involvement.”

Doll’s son asks him almost daily when the next Troops meeting is, because he knows they are going to build and launch rockets, and he will also ask how many weeks until the next monthly activity where they will be kayaking down a river, and grilling burgers in a park.

Doll commended how these activities bring fathers, sons and priests together, the Troops requiring membership and involvement of all the fathers of troop cadets.

“It is too easy for dads, including myself, to make excuses, including work life, yard work, and other projects on the list, and ultimately to put off important quality time with our sons,” he said. “As a troop father, I get the benefit of reliving some of my best childhood memories; exploring, camping, fishing, rock climbing, and other adventures with my son.”

He extolled how the out-of-doors component is complemented by the faith element as well.

“In addition to outdoor activities we also spend time participating in Catholic devotions,” said Doll, “including the Holy Rosary, Eucharistic processions, daily prayers, and most importantly, assisting at beautiful and reverent Holy Masses together.”

“Some of the fathers come into the troop spiritual heavy weights,” he added, “others bring great outdoorsman skills, and still others bring practical handyman skills.”

“Over time,” said Doll, “we sculpt each other into better Catholic men ready to fulfill the great duty for which God had called us; namely, the duty of raising the next generation of priests, deacons, religious brothers, and fathers, forged by virtue in the image and imitation of Christ.”

The Troops of Saint George is among a number of religious and traditional youth programs gaining prominence as the Boy Scouts of America has departed from its founding moral principles into radical ideological agendas.

“When it comes to the Troops of Saint George, while engaging in many similar outdoor activities to these organizations, we are unapologetically Catholic and embrace the Sacraments first and foremost, with the outdoors simply being our canvas,” Squibbs told LifeSiteNews. “In addition, in order to form Holy Catholic Men, we fathers (or male guardians) are members alongside our boys. We have a built-in “iron sharpens iron” mentorship with our sons, other men, as well as their sons.”

“With the growing amount of gender confusion in our world today, the Troops of St. George offers Catholic boys and their dads a deep, fully Catholic experience in the outdoors with sacraments, adventure, and authentic masculinity,” he said.

Squibbs said in response to Cardinal Burke’s endorsement that the world is hungry for truth, and the Troops of Saint George provides an opportunity for boys and young Catholic men to go deeper in their faith while experiencing the outdoors.

“Our growth is certainly rooted in Catholic parents’ desire for programs that are rooted in truth and authentic masculinity,” he said. “We’re excited about what God’s doing and where He’s guiding this movement.”

National Executive Director Dr. Jeremy Lustig said the cardinal’s endorsement affirms the significant efforts of hundreds of parents and volunteers who have given thousands of hours in work and prayer to build the Troops of Saint George over the past five years.

“All glory to God for what we’ve been able to do for men, their sons, and their families,” Lustig said. “Cardinal Burke is a champion of fidelity and orthodoxy, so his endorsement means more to us than words can express.”

Correction June 27, 2018: A quote that had been attributed to Bishop Olson was actually made by Brian Squibbs. The attribution has now been amended.