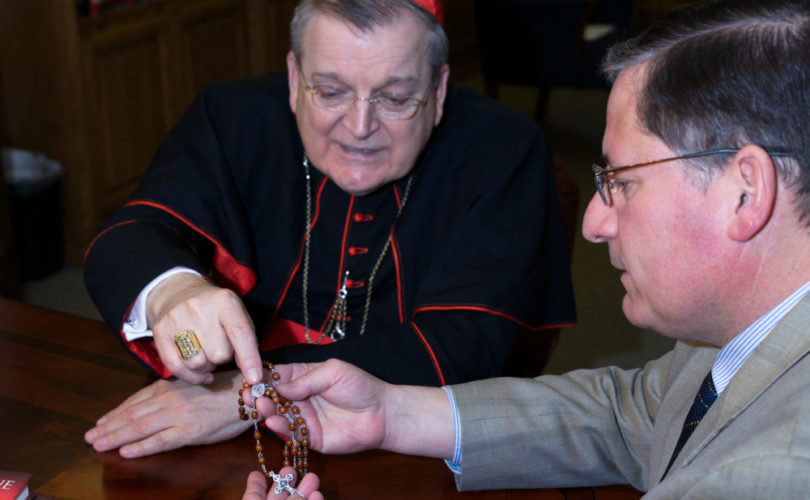 SAN DIEGO, California, January 11, 2016 (LifeSiteNews) – Cardinal Raymond Burke is calling on faithful Catholics to “storm heaven” by joining with him once a month in the Mass and the Rosary to pray for hope and guidance out of the Church’s current “confusion.”

The grassroots lay organization Catholic Action for Faith and Family has put up a page on its website for “Rosary Warriors” to sign on to the joint effort, which Cardinal Burke launched with a Mass on December 8.

“As Catholics we find ourselves in a general crisis of culture,” the organization’s spokesman Thomas McKenna told LifeSiteNews. “We seem to be losing the battle against same-sex marriage, we see Planned Parenthood killing babies and selling their body parts and nothing is done to stop them, and euthanasia is being brought in through the backdoor.” Then there is the state of “confusion” in the Church itself flowing from public statements by high officials.

“Cardinal Burke hears from ordinary Catholics all over the world and believes they are in danger of becoming discouraged and disheartened,” said McKenna, who has interviewed Cardinal Burke several times for EWTN. “He tells those people the answer is hopeful prayer. So we are offering a way to fight back by joining in prayer.”

For a month now Catholic Action has used its website to call for “Rosary Warriors” to “Storm Heaven with Prayer” by praying the Rosary on the first day of the month in union with the Mass and, they hope, with one million other Catholics.

So far Catholic Action has signed up 15,000 on the website. All are invited to state their personal prayer intentions and are committed to pray for a lengthy list of more general ones.

Though McKenna refers to events in the wider culture, especially in the U.S., as incentives to this campaign, its webpage leads off a long list of the campaign’s intentions with prayers for the Church itself: “For Holy Mother Church: that Our Lord guide the Pope, the bishops and all members of the clergy to be holy in all things, faithful shepherds, beacons of Truth, and defenders of Good” and “May all confusion be dispelled from the hearts and minds of all people and may the Light of Truth shine in them.”

It then lists these intentions:

“People who identify themselves as Catholics form a sizeable bloc of voters in this country,” said McKenna. “If we all knew and understood our Church’s position on many public issues we could have a real influence.” Catholic Action’s general purpose is to educate Catholics about Church teachings, but McKenna believes there is “a crisis in catechesis” which has left Catholics to believe what they want about issues such as homosexuality and abortion, which turns out to be whatever the culture believes.

Cardinal Raymond Burke himself has committed to offer the Mass he says on the first of each month for both general intentions and all the personal intentions of the “Rosary Warriors,” who in turn agree to pray for the intentions of all the others. “This way our prayers have much more strength,” said McKenna.